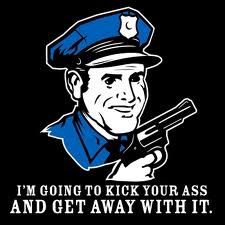 An assistant police chief in Arlington, Texas attended an event to end domestic violence and was arrested a few hours later for – wait for it – family violence.

On Saturday morning, James Hawthorne participated in the Take a STAND Break the Silence 10K/5K/Walk. The purpose of the event was to raise awareness and honor victims of domestic violence. It was designed to raise funds for organizations to financially support individuals in transition from violent situations and to raise funds to build a safe facility, according to the event website.

That evening, Hawthorne was arrested at his home on a charge of assault with bodily injury to a family member, a class A misdemeanor. It was classified as family violence due to his relationship to the victim, which has not been released.

Arlington Lt. Christopher Cook told the Star-Telegram that Hawthorne also was held on an emergency protective order which was filed by a victim.

Cook said he cannot release details on the bodily injury the victim sustained, and that the department was “very deliberate and calculated” in what they are sharing with the press. He said requests for information, including the incident report and the victim’s identity, would have to go through the legal department:

“They’re not going to let me release any of that because of the ongoing investigation. He’s an assistant chief and we have to be really careful what we release on it.”

Why do they have to be really careful about what they release? Is it because he is one of their own?

Hawthorne was arrested by officers from his own department.  That may present problems for the victim, as responding officers sometimes side with the abuser and fail to properly investigate or document the crime.

Diane Wetendorf is an advocate for battered women and has written three books on domestic abuse by police officers. She explains the brotherhood culture and code of silence often seen among police:

When an officer is in trouble on the job or in trouble with his wife or girlfriend at home, he counts on his buddies to cover for him. He gives them a story that explains why he “had to do” whatever he did. Whether or not they personally condone his behavior, they may rationalize his behavior, saying he was stressed out, under a lot of pressure, or quite simply, that he’s only human. They repeat his version of the story and they stick to that version. They put themselves on the line with their fellow officer. Whether testifying in court or smoothing things out at home, the rules are simple for them:

Say as little as possible.

Answer only the question asked.

According to the National Center for Women and Policing, domestic violence situations with police as abusers don’t always follow standard protocol:

Most departments across the country typically handle cases of police family violence informally, often without an official report, investigation, or even check of the victim’s safety. This “informal” method is often in direct contradiction to legislative mandates and departmental policies regarding the appropriate response to domestic violence crimes. Moreover, a 1994 nationwide survey of 123 police departments documented that almost half (45%) had no specific policy for dealing with officer-involved domestic violence.

A 1994 survey of 123 police departments across the nation found:

Not only do police officers tend to get away with domestic abuse, they also have a shockingly high propensity to commit such crimes:

Two studies have found that at least 40% of police officer families experience domestic violence,  in contrast to 10% of families in the general population. A third study of older and more experienced officers found a rate of 24%, indicating that domestic violence is 2-4 times more common among police families than American families in general.

Hawthorne has been placed on administrative leave until the investigation is complete.

Police Chief Will Johnson said he is ”deeply disappointed that an Arlington assistant police chief was involved in an incident of domestic violence. Regardless of who you are or where you work, domestic violence will not be tolerated or ignored in our community.”

Hopefully that means the case will be thoroughly investigated.