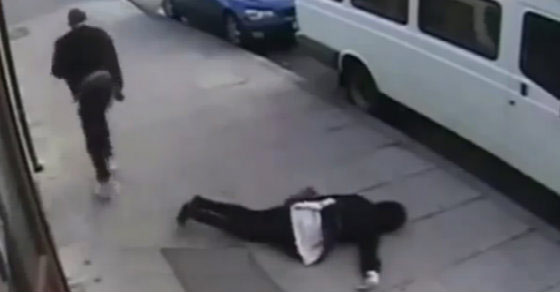 A new game being played by teenagers is spreading.

It’s called ‘Knockout’ and the purpose is to target random passersby in an attempt to do exactly as the name suggests – knock them out in a single blow.

But the violent ‘game’ has had deadly consequences for some, as CBS reports:

One victim shown in the footage was 46-year-old Ralph Santiago of Hoboken, N.J., who was found dead with his neck broken and head lodged between iron fence posts, according to NJ.com.

Video surveillance shows Santiago walking in an alleyway in broad daylight, and just as he’s about to pass a pack of teenagers, one launches the fatal, knockout blow.

And what’s the point?

“For the fun of it,” one teen said in the video.

“They just want to see if you got enough strength to knock somebody out,” said another.

The attacks often come from behind, when the victim is not looking, or in a seemingly innocent dialogue with a stranger who may approach the target with a question about directions or a random conversation.