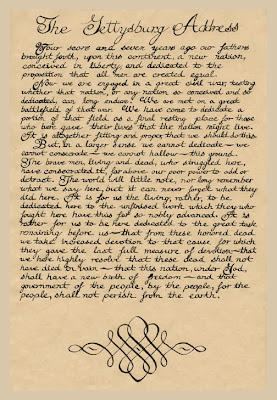 A two-minute speech delivered 150 years ago today on the once bloodied grounds at Gettysburg PA…a two-minute speech that turned the tide of a war…a war that pit brother against brother…father against son…where 170,000 fought…where a third of Lee’s army died or lay wounded…where a quarter of the of the Union forces suffered the same fate.

The Gettysburg Address…a speech that remains one of the greatest pieces of oratory the world has ever known…a speech that reinforced what our great nation stood for then and most importantly stands for today, “…that this nation, under God, shall have a new birth of freedom — and that government of the people, by the people, for the people, shall not perish from the earth.”

What our nation stands for today…what ‘We the People’ stand for…what our sham of a president does NOT.

According to Article II, Section 2, Clause I of the Constitution, the President of the United States is Commander-in-Chief of the United States Armed Forces, and in his capacity as Commander-in-Chief the president is sometimes asked to officiate at dedication ceremonies for military memorials, parks, national cemeteries, battleships, military bases, national monuments, and at other military related events.

To be asked to officiate at such events is an honor and should be treated as such for those being honored are those who gave their lives…are those who made the ultimate sacrifice in the name of freedom. Lincoln knew this and Lincoln honored those who died in one of the deadliest battles of the Civil War in a speech for the ages…in a speech that speaks of America’s dedication to God, Country, and Freedom.

And yet when it came time for Barack HUSSEIN Obama to NOT only honor those lost on that field in July 150 years ago…when it came time to honor the words that helped heal a nation…this most vile of men…this disgrace to NOT only the presidency itself but to his role as Commander-in-Chief of our Armed Forces…a man totally detached from honor and decency…decided NOT to attend the ceremony that will be held at the Soldiers’ National Cemetery. And coward that he is Barack HUSSEIN Obama had The National Park Service do his dirty work and announce his decision NOT to go. 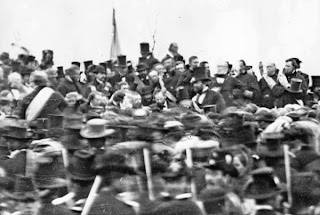 And the man who loves to invoke Lincoln’s name time and again and to talk of his admiration for our 16th president…the man who loves to say that he’s from the ‘Land of Lincoln’…the man who used the Lincoln Bible for both his inauguration ceremonies …cannot be bothered to pay tribute to one of our nation’s greatest speeches by one of our nation’s greatest presidents. Our nation’s first (supposed) black president, should be there if for NO other reason than to show the American people how far our nation has come since the days of the Civil War when the idea of a black president was NOT even a thought to be considered.

And when asked why he wasn’t going, Obama’s mouthpiece Jay Carney gave NO reason why other than to say he had NO updates on the president’s schedule for November 19th.

“I think that is an enormously significant event in our history, and I think Americans will take the appropriate time to consider it, consider the speech that was delivered there,” he said. “But beyond that, I don’t have any updates on the President’s schedule,” Carney bloviated, sidestepping the issue like he does for many other issues concerning our Traitor-in-Chief.

But this snub of Obama’s is NOT unique and will be added to his ever growing list of snubs towards anything having to do with our military or military related events. Remember, Obama skipping the Wreath Laying Ceremony at the Tomb of the Unknown Soldier in 2010 choosing to go to Chicago instead, but made sure to attend the ceremony in 2012 as it was a mere six months before the presidential elections and he needed the photo-op. Remember, Obama has failed to commemorate D-Day every year since 2010, and in his first visit to the Viet Nam Memorial, again before the election, was for a photo-op and NOTHING more for while he was there vets were blocked from their own memorial. And let’s NOT forget Barack HUSSEIN Obama’s ultimate slap in the face to our military when he stopped elderly WWII veterans from visiting their own open-air memorial during the joke of a recent government shutdown.

And to add insult to injury, Obama is sending newly appointed…as in just this year…Interior Secretary Sally Jewell to honor those lost…to honor the most honorable of all Lincoln’s words…on behalf of this administration. Sending Jewell to honor the man who freed the slaves when Obama himself should be in attendance to offer words of NOT only racial healing for the wounds he and his cohorts opened anew but also to offer words of bi-partisan reconciliation to do what’s right for the country NOT for what’s right for the body politics…this is the message…the words that Obama should be delivering today…a message of healing…a message of hope…like Lincoln delivered all those years ago. 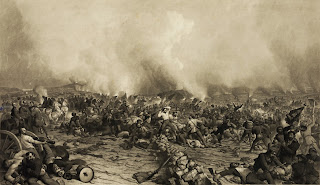 And while great presidents exude pride NOT just in themselves and in the office to which they were elected, they show pride in how they speak of the American military and in how they relate to the American people. Maybe this means that in the end its best that Obama NOT attend today’s ceremonies for he does neither.

And maybe his NOT attending will allow those who died at Gettysburg to continue in an undisturbed Everlasting Rest for they will NOT be dishonored by this most dishonorable of men. And maybe the words of Abraham Lincoln…words that reset the course of a nation…can continue to be honored, revered, and respected without the stain Barack HUSSEIN Obama would put upon them…period.