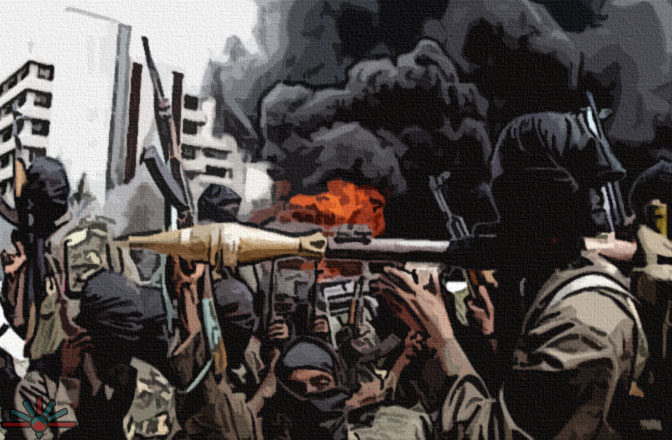 Boko Haram Islamists have been raping and pillaging their way through Nigeria. The brutality of the Islamists knows no bounds, and they kill without conscience or discrimination. All told, the Islamic butchers have massacred nearly 1,000 Nigerians in the first six months of 2013. But now stories of their seizing Christians women, many of them teenagers, and forcing them to be “slave brides” have surfaced. After the college massacre, roadside killings, and terrorism, this is just one more atrocity that Boko Haram is inflicting on terrified Nigerians. Her name is Hajja and she is 19 years old. And in a hilltop cave in Nigeria the young woman was forced at knife point to make a decision, to “convert to Islam or die.” But the Boko Haram Islamists who held her captive, ready to push down on the knife, did not kill her. Instead, they brutalized her in ways that would make someone want to die. They forced her into slavery.

Two gunmen from Boko Haram had seized the Christian teenager in July as she picked corn near her village in the Gwoza hills, a remote part of northeastern Nigeria where a six-month-old government offensive is struggling to contain an insurgency by the al Qaeda-linked Islamist group.

In a new development, Boko Haram is abducting Christian women whom it converts to Islam on pain of death and then forces into “marriage” with fighters – a tactic that recalls Joseph Kony’s Lord’s Resistance Army in the jungles of Uganda.

In Islam, everything is violent and nightmarish. There is no way to make sense of the violence with rationale. The only way to understand Islam is to pour through the Quran. And then it makes perfect sense. A “religion” that allows a “sex jihad,” child rape/marriage, and forced “slave brides” is deranged to the point of pure insanity. But Islam is the very definition of insanity.

There is no way to make sense of the violence with rationale. The only way to understand Islam is to pour through the Quran. And then it makes sense. A “religion” that allows a “sex jihad,” child rape/marriage, and forced “slave brides” is deranged to the point of pure insanity. But Islam is the very definition of insanity.

The three months Hajja spent as the slave of a 14-strong guerrilla unit, cooking and cleaning for them before she escaped, give a rare glimpse into how the Islamists have changed tack in the face of Nigerian military pressure.

“I can’t sleep when I think of being there,” the 19-year-old told Reuters, recounting forced mountain marches, rebel intelligence gathering – and watching her captors slit the throats of prisoners Hajja had helped lure into a trap.

It is truly stomach turning to think that human beings are capable of this much atrocity. The horrors that Hajja went through, being a slave for 14 member guerrilla unit is impossible to fathom. How did she survive being beaten and tortured daily? It is only by the grace of God that she is alive today. However, the new tactic being used by these mercenaries of Satan is truly disturbing, because for all the deliberate killings, there is no way to know how many women are being held captive in these guerrilla units.

Nigerian security officials say the Islamists have pulled back after army assaults since May on their bases on the semi-desert plain and are now sheltering in the Mandara mountains, along the Cameroon border around the city of Gwoza. From the hills they have been launching increasingly deadly attacks.

The rugged mountain terrain – as fellow al Qaeda allies found in Afghanistan – has proven an advantageous base for a movement that once styled itself the “Nigerian Taliban” and sees all non-Muslims as infidels who must convert or be killed.

President Obama’s Muslim Brotherhood Administration finally designated Boko Haram a terrorist organization this past Wednesday. How many innocent people had to die before the brilliant Islamists in Washington made the assessment that this cult was a terrorist group? Since May 2013, when a state of emergency was declared in Nigeria due to the violence, 1,708 deaths in 83 violent clashes have occurred. That is six months. The Obama Administration should be shamed. This is an outrage. But what more can anyone expect from Islamic sympathizers?

She ceremonially converted to Islam, cooked for the men, carried ammunition during an attack on a police outpost and was about to be married to one of the insurgents before she managed to engineer a dramatic escape. She says she was not raped.

“If I cried, they beat me. If I spoke, they beat me. They told me I must become a Muslim but I refused again and again,” Hajja told Reuters in an interview. Her family name is withheld to protect relatives still living in the Gwoza area.

“They were about to slaughter me and one of them begged me not to resist and just before I had my throat slit I relented. They put a veil on me and made me read from the Koran,” she said in the Nigerian capital, Abuja, where she is now living.

She also claims the group moved every day to avoid tracking by the army. And they listened to radios for news of other attacks by Boko Haram.

Pushing the conflict into poor rural regions, like Gwoza, where Hajja was seized, runs the risk of radicalizing more disenchanted youths and drawing more people into the violence.

“I worry that youths will take the law into their own hands. It will become a war between Christians and Muslims,” said councilor Yohanna.

This has already happened, and it shows no sign of abating. Boko Haram Islamists are hacking their way through Nigeria, and leaving unparalleled carnage in their wake. “Hajja eventually escaped by feigning severe stomach pains.

“I finally tore off the veil and I cried,” Hajja said.

“So many times I thought I’d die.” Miraculously, she was saved from certain death.