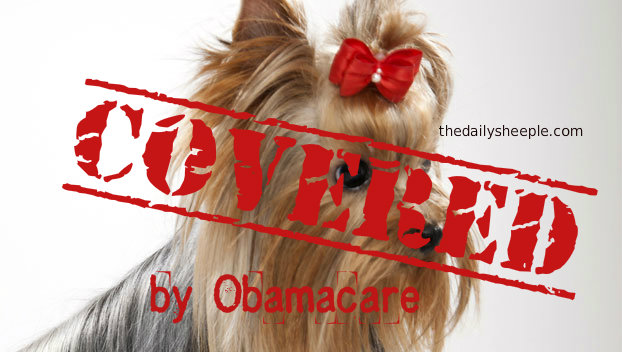 Less than .02% of Americans have managed to sign up for healthcare plans on the ill-designed Healthcare.gov website, but one Colorado man managed to get his 14 year old Yorkshire Terrier successfully registered.

Shane Smith, of Fort Collins, says his dog Baxter received a letter informing him that a health insurance account had been opened in his name through Connect for Health Colorado.

“I thought, ‘Wow, this is so awesome,’” Smith said with a laugh. “They have gone out of their way to insure my 14-year-old Yorkie.”

Smith had called Connect for Health Colorado to sign himself up for insurance because his old plan was cancelled due to Obamacare.

He’s not sure exactly how the confirmation letter went to his dog, but he says he thinks it’s because of a series of security questions a representative asked him over the phone.

“There was some kind of code or something, so I gave them my dog’s name,” Smith said. “They must have just put it in the wrong slot or something.”

After hearing about all the headaches with Obamacare nationally, Shane says this mistake doesn’t seem so bad. (source)

This is just another farcical event in what has to be the worst launch of a federal policy that has ever occurred.

Connect for Healthcare Colorado had no specific comment on the pup’s policy. They did provide this vague response:

“In general, our letters to customers are generated according to information that is provided by the customer into the system either online or over the phone. In other words, our system does not make up a name when generating a letter. As with any new system, mistakes are possible and when notified by customers, we work quickly to resolve the situation.” (source)