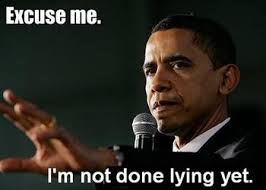 Obama knew…Kathleen Sebelius knew…they all knew as far back as last March that the ObamaCare website…Healthcare.gov…had problems…major problems…yet they kept moving forward and promoting a site that simply did NOT work while telling ‘We the People’ that all was well and on schedule.

Incompetence…subterfuge…LIES…Barack HUSSEIN
Obama runs the gamut of all three as a law the majority of the American people do NOT want, (57+% do NOT want ObamaCare in any form and 71% at least want it delayed) need, or can afford, is being shoved down our throats…shoved down our throats as we’re told we must go shopping for health insurance on a site that is broken beyond repair…or else we’ll be hit with a penalty even though we have NOTHING to do with the site’s problems.

“I was NOT informed directly that the website does NOT work,” so said Barack HUSSEIN Obama during his anything but an ‘apology tour’ while he made the media rounds. Now read those words again and pay close attention to the context of the way the word ‘directly’ is used. Directly…Obama said he was NOT told ‘directly’ but he was indeed told for ‘directly’ only means that Sebelius herself did NOT tell him…it does NOT mean that someone else involved with the site did NOT tell him.

But the truth is that according to documents released yesterday by the House Energy and Commerce Committee, Obama and those in his administration were indeed told last March that there were potential risks with the implementation of the Healthcare.gov site and this in turn forced Obama mouthpiece Jay Carney to allude to the fact that Obama might indeed have been briefed back in March.

So now it’s time for Obama and his minion to devise yet another LIE to cover for the LIE that he did NOT know the site was such a mess…which in turn was devised to cover for his LIE about the cancellation notices…which covers for his BIG LIE about the fact that ObamaCare was actually designed to fail so he could get what he’s wanted all along…a single-payer system of health care…a single-payer system so he could further tighten the grip on ‘We the People.’

But thankfully, Obama’s web of LIES is starting to unravel. In fact, McKinsey & Co…the independent consulting firm that waded through 200+ documents and interviewed HHS staff to identify problems that might rise before the official October 1st rollout…told in a report of giving administration and HHS officials briefings last March in relation to issues that could affect ObamaCare’s debut…issues including insufficient testing, evolving requirements, and that ObamaCare relied too heavily on outside contractors.

But in spite of all the problems with the website’s official rollout…paramount of which is that the website simply does NOT work…problems that the site is ‘hacker-friendly’ causing people to be subjected to identity theft and fraud…problems with proposed monthly rates so high that it scares most who peruse the site to run away…the first enrollment deadline of December 15th for those who want insurance coverage beginning January 1, 2014, is fast approaching and Obama still will NOT agree to a delay.

So when December 15th does arrive with enrollment numbers NOT met what happens then…I’ll tell you what…Obama has another happy little surprise in store to screw ‘We the People’ yet again.

And that happy little surprise is that to assure that his namesake law works, Obama had a clause buried within its 2000+ pages of nonsense that says the government can bailout insurance companies who do NOT make enough money because of all law’s mandatory coverage requirements. In a provision called ‘risk corridors’ that’s used to mitigate an insurer’s pricing risk…basically protecting insurance companies from unexpected monetary changes in the marketplace…a safety net for insurers during the first three years of ObamaCare’s implementation designed to protect the marketplace if more expensive patients (meaning older sicker Americans) sign up than the so-wanted younger healthier sign-ups. This means if costs end up being higher, the government pays part of the difference and if costs are lower the insurance company pays the government…translating to its ‘We the People’s’ taxpayer dollars that will be forced to bail out the insurance companies.

So while Senator Marco Rubio (R-FL) yesterday introduced a bill to remove this clause, Obama and crew continue to squawk that the risk corridors provision is important for avoiding the so-called ‘death-spiral’ of high costs and low participation that could jeopardize…if NOT outright kill the law. A lack of risk protection could cause insurers NOT to participate in the exchanges, or raise their premium rates even higher than they’ve already been raised…meaning more people will simply choose to pay the penalty than to buy insurance they simply cannot afford to buy let alone to maintain.

And the nightmare that is ObamaCare continues to wreak havoc on our economy…our business communities…and on each and every American NOT only cancelled from carriers and policies they were happy with but on ALL taxpaying Americans who are now being forced to pay and carry the burden for the mere 5% of Americans who currently are uninsured…Americans who can walk into any emergency room in this country and NOT get turned away.

And while the ObamaCare nightmare continues on there is a way to wake up from it…REPEAL the whole damn thing and be done with it…and then vote out each and every Democrat who voted this monstrosity in BEFORE they even bothered to read it…period.