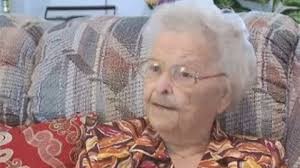 Last Monday a 92-year-old woman awakened to a masked man standing over her. He woke her up and demanded $20.

Opal Phelps of Jasper County, Texas, said she wasn’t afraid of the intruder.  She told him she didn’t have any money, and didn’t know where she put her purse.

Phelps said the man tried to place a pillow over her face in an attempt to keep her quiet.

“He tried to make me shut up, but he didn’t have no luck at it,” she said.

The man tried to get Phelps to put on her shoes, but she wasn’t having that either:

“He had a hold of my leg trying to put them shoes on, and they hard to get on, and I just took my other foot and kicked him right in the face.”

Phelps hit the button on the Life Alert monitor on her nightstand, and the intruder snatched the gun she kept near her bed.  He fled the scene, and still has not been captured.

Phelps isn’t going to let the incident scare her:

“I’m going to stay here. I told that cop I was getting me another gun.  He says get it. I’m going to use it next time I think.”