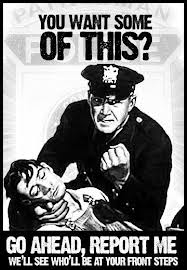 Two days ago we covered the story of James Hawthorne, an assistant police chief in Arlington, TX who was arrested for family violence hours after attending an event to…well…end domestic violence.

At the time, the relationship between Hawthorne and the victim had not been released.  It is now known that the person he is accused of assaulting is his wife, and that she also got a protective order against him.  It looks like we won’t find out much else, though.  On Monday, we were warned that details about the arrest would probably be kept from the public when Arlington Lt. Christopher Cook said he could not release details on the bodily injury the victim sustained.

Cook also said that the department would be “very deliberate and calculated” in what they will share with the press. He said requests for information, including the incident report and the victim’s identity, would have to go through the legal department:

“They’re not going to let me release any of that because of the ongoing investigation. He’s an assistant chief and we have to be really careful what we release on it.”

We pointed out that Hawthorne was arrested by officers from his own department, which often causes problems for victims. Police tend to put up a “blue wall” around accused colleagues – they protect their own.

It looks like that is indeed happening in the Hawthorne case.

When a police officer is arrested, for their protection, some private information is kept from reporters and the public, like driver’s license numbers, addresses and more.

However, it appears as though the Arlington Police Department is going to great lengths to keep non-private details secret about the arrest of Assistant Police Chief James Hawthorne.

FOX 4 asked for the police report on Hawthorne’s arrest Sunday for family violence.

The police department sent back the report with redacted statements from three different police officers writing out what reportedly happened, including things said by alleged victims, witnesses and suspects.

Predictable, and not at all surprising.