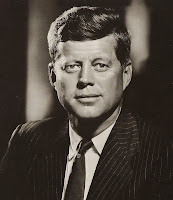 And with those words…said by John Fitzgerald Kennedy at his inaugural address in 1961…so-called ‘Camelot’ began. Words that became part of our nation’s collective consciousness…words embraced by both Democrats and Republicans…yet words bastardized and twisted by today’s Democrats to mean, ‘ask what your country can do for you so we can keep your loyal to the party.’

And nowhere is the twisting of these great words more evident than in today’s Obama run government as ‘We the People’ are asked to turn over our Constitutionally given freedoms and rights to aid Obama’s goal of cradle-to-grave control over every aspect of our lives…as we’re taxed and bled dry as this government redistributes our wealth to fund its goal of transforming our beloved America into something unrecognizable to us.

John Fitzgerald Kennedy…our nation’s first Roman Catholic president…which was as big a deal back in 1960 as Obama being our (supposed) first black president is today…is probably the most documented and chronicled Democratic politician to date. Yet JFK…the man today’s Democrats so revere…was more of a mainstream Democrat who belonged to a Democratic Party where grassroots
Democrats…today’s ‘Blue Dogs’…were the true champions of middle class Americans, and a party where civil rights blossomed because it was the right thing to do NOT because blacks were seen as pawns to be used and manipulated for votes as they are by the Democrats of today.

And what of Kennedy himself…are his ideals even compatible with today’s Democrats…I think NOT for his very words echo more the ideals and beliefs of today’s Republican Party…of today’s TEA Party movement…than the words of Barack HUSSEIN Obama and his Democratic Party faithful…a band of miscreants led by the likes of Harry Reid, Nancy Pelosi, and little lapdog Debbie Wasserman Schultz.

“I don’t believe in big government”…“I believe in the balanced budget.” So said JFK during the Kennedy-Nixon Presidential Debate in 1960…words as ‘foreign’ to the ears and minds of today’s Democrats as was his belief in capitalism and the free market for JFK understood what today’s Democratic Party and its leaders do NOT…he understood the Economics 101 concept of ‘you cannot spend more than you take in.’ In fact, mere weeks after his Inauguration he said, “Lower rates of taxation will stimulate economic activity and so raise the levels of personal and corporate income as to yield within a few years an increased — not a reduced — flow of revenues to the federal government.”Sounds like Republican ideology doesn’t it.

“Our tax system still siphons out of the private economy too large a share of personal and business purchasing power and reduces the incentive for risk, investment and effort — thereby aborting our recoveries and stifling our national growth rate,” Kennedy said. Sounds NOT unlike Republican candidate Mitt Romney during the 2012 Presidential Debates.

Also, in 1962 Kennedy issued an Executive Order that prohibited the FBI and CIA from collective bargaining for national security reasons…meaning like Republicans, Kennedy did NOT believe that unions should be in charge of our nation’s security. However, in 2002…true to liberal Democratic philosophy…Billy-Boy Clinton insisted that every part of the new Department of Homeland Security be subject to collective bargaining…and you all know how that turned out.

“As goes steel, so goes inflation” Kennedy said, and when US Steel announced an increase of $6 a ton in the price of steel, Kennedy knew that an agreement to hold prices steady was in place and this allowed him to get union leaders to drop their seventeen-cent-an hour proposal. Kennedy was able to convince all parties involved that they were helping to contain inflation to improve the country’s competitive position abroad. JFK…a Democrat concerned about inflation was a Democrat who stood strong against big union…something you will NEVER see from today’s Democratic Party.

And unlike many of today’s ‘catering to the muslims’ Democrats…Democrats like Obama and John Kerry who stab Israel in the back every chance they get…Kennedy was a staunch supporter of the Jewish State. “Israel will endure and flourish. It is the child of hope and the home of the brave. It can neither be broken by adversity nor demoralized by success. It carries the shield of democracy and it honors the sword of freedom,” Kennedy said as he initiated security ties with Israel, and founded the US-Israeli military alliance…something today’s Democrats are starting to shy away from.

Also during his short term in office Kennedy tried to push through (but failed) his version of health care reform…a Medicare bill that would have allowed those in the work force to contribute to their own old-age health insurance program under Social Security instead of being forced to rely on public or private charity. Sounds NOT unlike Republican Mitt Romney’s health savings accounts proposal.

“First, I believe that this nation should commit itself to achieving the goal, before this decade is out, of landing a man on the Moon and returning him safely to the Earth…” Kennedy said. And so began an era of American exceptionality in space…an era ended by Barack HUSSEIN Obama and the Democrats with the discontinuation of the Shuttle program with NO replacement in sight…along with a newly Obama forced NASA objective of ‘muslim outreach.’ The man…the Democrat…who reached for the stars had his dream of space exploration cut short by his own supposed party.

And while today’s Democrats love to say they celebrate tolerance, unfortunately that tolerance is often done through a one-sided view of tolerance…intolerant tolerance so to speak…a view that treats those on the opposing side…meaning Republicans, TEA Partiers, and believers that America is ‘one nation under God’…as hate-mongers and extremists. And this is NO more evident than in the pro-abortion/pro-life debate. And here again Kennedy’s views are NOT in sync with today’s Democrats for Kennedy appointed pro-life judge Byron White to the Supreme Court. And while Kennedy was a known womanizer he had a certain moral compass that went hand-in-hand with his Roman Catholics beliefs…a belief in God, family, and the right to life. 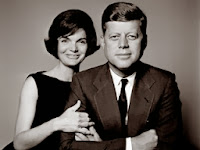 But all was NOT as most Democrats today have made it out to be for Kennedy himself was NOT a popular president with the American people. The popularity he had..his fame and success so to speak…was as much because of Jackie Kennedy as it was because of anything he did or said. The young, beautiful Jackie enamored the American people to him for she was ‘Camelot’s’ queen more than he was its king.

And so Kennedy’s re-election in 1964 was not a given…and while today’s Democrats still see this man as the untouchable ‘King of the Democratic Party’…the reality is that aside from some memorable quotes and some beliefs that were anything but what the Democrats of today abide… JFK’s presidency was, for the most part, a presidency made of urban legend…a presidency forever seen through rose-colored, romanticized glasses. Kennedy’s true legacy is a legacy of The Bay of Pigs and the Cuban Missile Crisis that took us to the brink of annihilation and back again, with his missteps in both dooming the Cuban people to 50+ continuing years of Fidel Castro and now his brother Raul Castro.

So while today we honor and memorialize our nation’s 35th president…a man whose presidency encompassed just 1000 days…it must be remembered that Kennedy’s presidency was unfilled as to the possibilities of what it might have been. And now many question if JFK was liberal enough to have been a member of today’s Democratic party. And to that I say NO for I think Kennedy would have been more in step with today’s moderate Republicans …NOT RINOs per se…but more like the Republicans of conscious who are willing to cross party lines if it is for the good of the country.

And to that I say…period.