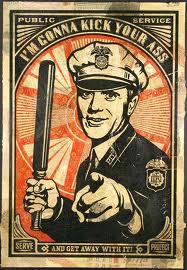 The Atlantic City, New Jersey police department appears to have a very bad apple in their force.

Perhaps the most notable case of extreme brutality inflicted by Wheaten is one that occurred last June and involved the beating of college student David Connor Castellani.

Castellani was kicked out of a casino for being underage. Surveillance video shows four Atlantic City officers talking to him. They searched his pockets and let him go.

Castellani started to walk away and pulled out his cell phone to call a friend. As his parents later explained, his friend drove them to the casino that night and was Castellani’s ride home. After the phone call ended, he returned to the group of police officers and appeared to be asking them a question. Castellani’s parents said he was asking if he could return to his friend’s car, which was parked on casino property. The security camera footage shows Castellani walking away from the officers, but it appears that he and the group of cops continued shouting back and forth to each other.

What happened next is disturbing. The security camera video shows the four officers chase and tackle Castellani. They forced him to the ground and beat him relentlessly. One officer pulled out a baton, which he used to beat Castellani on his back.

As if it wasn’t brutal enough to have four officers beat one 20-year-old man, another officer arrived on the scene and unleashed a K9.

Five officers and a dog to deal with ONE man.

Castellani received over 200 stitches from the incident.

The most recent lawsuit against Officer Sterling Wheaten was filed by Janine Costantino, who claims Wheaten assaulted her at Caesar’s Casino last year. She says Wheaten arrested her brother after he got into an altercation with another customer:

“Wheaten had my brother in a headlock and his arms were limp and his legs were weak.  I screamed out that it was police brutality and that I was videotaping it all.”

Constantino said that’s when Wheaten came after her:

“He was running at me and he says, ‘Give me the phone you b**h.’ He grabbed my bun and he was slamming my forehead into the floor.”

Wheaten arrested Constantino, but the charges against her were dropped. She said another officer told her, “Oh, that’s your first mistake. You shouldn’t be videotaping police officers.”

Wheaten continued to force his knee into her back while attempting to review the footage on the phone. He then allegedly threw the phone against a wall, but it ricocheted back and was retrieved by Costantino. At that point, Wheaten began to beat her again and, again, she relinquished the phone.

Wheaten stood up and handed the phone to a smaller man in a plaid shirt and said, “you got this?”, To which the man in the plaid shirt said in sum and substance, “yah, I’ll take care of it. Don’t worry.”  The man, unidentified in the suit, allegedly put the phone in his pocket and walked away. The phone was never recovered after the arrest.

Later, while Costantino was being processed, the suit alleges Wheaten returned to tell her that her phone had been “taken care of” and that she would go to jail with the other “animals.”

According to the suit, Costantino sustained bruising, lacerations and a sprained arm over the course of the incident, but her requests for medical attention were denied. (source)

Jennifer Bonjean, the attorney who is representing Castellani, Costantino, and others who are suing Wheaten, told NBC:

“I get calls every day from people who have been brutalized and terrorized by the Atlantic City Police Department. It’s overwhelming the pattern that I’ve been able to establish just with these limited cases I’ve been involved in. I think the prosecutor’s office is turning a blind eye to many of these allegations. They have to be seeing the same police officers that we’re seeing.”

Bonjean said she believes departmental policy and a lack of oversight has created a culture that’s permissive of police misconduct in Atlantic City:

“It’s statistically not credible that every civilian who comes into the Atlantic City Police Department is lying. To me, the numbers speak for themselves. The burden (of proof) is high, but it’s not that high.”

One Atlantic City police officer came forward to report the misconduct he witnessed in the department (including the K9 attack on Castellani). The result? He received a death threat.

Increased scrutiny of the Atlantic City police department has led to the city looking into the use of body cameras, which mount on the officer and record activity.

Police Chief Ernest Jubilee said that in-car cameras have exonerated officers accused of brutality. He said the cameras provide evidence and watch over the officers:

“Not that I think the officers need to be watched, but it takes the responsibility to the citizens to a different level. It presents the public with an added level of confidence.”

Maybe most of the officers don’t need to be watched, but it seems reasonable to strap a camera on Officer Wheaten as soon as possible. Or better yet, relieve him of his duty and toss him in jail for assault.