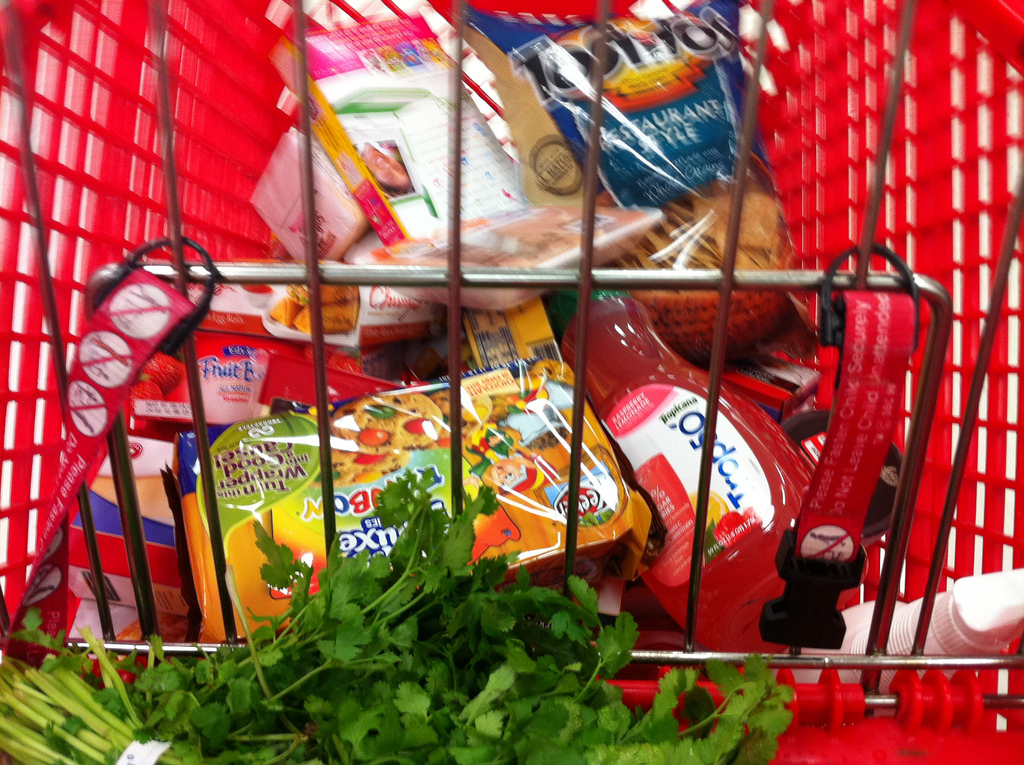 My father’s immediate family survived The Great Depression rather well. His father had an office job on the Baltimore & Ohio Railroad. However, his extended family suffered, so in order to get everyone fed, everyone was welcome at the family table. The core family was mother, father, two sons, and grandparents, but the dinner table usually had ten, eleven, or more people around it.

Everyone brought what they could: five cents, a few eggs, or a cup of flour. At least one meal a day was guaranteed. My grandmother and great grandmother were excellent cooks who knew how to stretch a penny. Women in those days shared recipes about how to make cakes with no eggs and apple pies with no apples. They worked together to thrive through tough times as well as they could.

My mother, born during the worst year of The Great Depression, also learned how to stretch a penny, which was a good thing because pennies were precious when I was young. I was a child during the 1960s. Women didn’t work, there were five children in my family, and my father was a public school teacher. Times for us were pretty tough. Milk was carefully allotted, treats like candy bars and ice cream were rarities, and the only person who ever got steak was my father…and I mean EVER. Still, we all were raised well and we all found ways to put ourselves through college because our parents couldn’t afford tuition.

November 2013 brings with it cuts to the S.N.A.P. program better known as food stamps (See Example A below). Some would have you believe that this will lead to children starving in the streets, a disaster cruel and unimaginable. How could a country as rich and caring as ours allow such a thing to happen? But this is really just another myth perpetuated by statists who want to continue redistributing the wealth.

I have lived most of my life, and still live, in poor city neighborhoods which house a large number of food stamp recipients. The lack of grocery carts in the front of a neighborhood store on a given day is often a clear indicator that food stamps had just been released for the month, as well as indicator that I should shop on another day. The aisles would be over run. I also generally chose to shop on another day, because seeing what was in the carts of these food stamp recipients usually made me angry.

Why angry? Because while I was struggling to search the shelf for the best bargains I could afford on my limited budget, families with food stamps were filling their carts to overflowing with shrimp, sodas, sugary name brand cereals, and candy. These same families would then complain when the money ran out before the end of the month. Angry because I would be standing in line behind a woman wearing Italian leather shoes and a really beautiful silk blouse, while I was standing there in my Good Will shoes and Wal-Mart tee shirt. She would have shrimp and steak and frozen lobster ravioli on the counter, along with a pile of other food, and I would be holding my ground beef, marked down for quick sale, and on-sale pasta boxes. Then she would pull out her Independence card (an ironically named debit-like food stamp card) and load her groceries into her new S.U.V. and drive away. Did I resent her? You bet I did.

Before I venture further and get those nasty comments about how racist and uncompassionate I am and that there are people who are really struggling, let me say this. I DO know people who really need food stamp help for a period of time. I even had someone share her food stamps with me once when I was really struggling as a newly divorced single mother. I personally have been hungry, though for blessedly short periods of time. I have been through a few really hard times in my life and some of that while I had small children. I do not want to remove all safety nets that are there to help people when they really need the help, but the system is abused and the full truth is not being told, starting with the lie that these coming cuts are going to lead to starving children.

The amount of money provided for a family of four is sufficient, even with the upcoming cuts. In fact, there were times in my life when $158.00 a week for food would have seemed like an absolute fortune. It is enough to feed a family; it is not enough to pay for shrimp, steak, and sodas (see Example B below). In order to prove my point, I have created a week long menu that is not atypical of what my family currently eats (see Example C below).

I went shopping at our local Aldi’s, a grocery store designed for people with limited budgets, though it has excellent basic items as well as very reasonably priced “gourmet” items such as smoked chicken apple sausage. Many of the items that I budgeted for the week, such as peanut butter and jelly, would carry over into the next week. I also made sure to include some staple items that would need replenishing on a monthly or bi-monthly basis, with the assumption that different staples would need to be replenished each week.

While shopping, I kept careful track of my costs. I had to make some adjustments to keep within the $158.00 budget. I had to cut back on a few treats and one item that had been on sale when I first planned my menu was no longer on sale. It took me well over an hour to go through the small store, while paying attention to the budget, but when it was done I had 21 meals for four people, including drinks, extra helpings, and probably a few leftovers. My total was $157.57. I could have reduced the cost further by not buying grated cheese or by buying a box of regular instant oatmeal instead of the flavored packs. There were other changes that I could have made if it was needed. I did not purchase ANY sodas or candy.

Since most families that are on food stamps also receive free school lunches, the weekly total for families on food stamps would be lower than $157.57. Free school breakfasts are offered to ALL public school students in my city. Therefore, if I cut the costs for lunches and breakfasts for five days in half based on that assumption, the final cost could be around $20-25 less, averaging $132.57-$137.57. And since food stamps are a supplement to either income or other entitlements, people are not completely limited to their food stamps for food purchases. So the shocking fact that was reported on the news this morning, that those on food stamps are coming up two weeks short for food each month, denotes poor planning not too little money.

Did this menu contain luxury items and treats? A few, but more treats could be squeezed out on occasion, much like when I was growing up. There is pizza and grilled cheese and cinnamon rolls and a really yummy but simple Sunday dinner. Will it take more work to cook and create a menu with a nice variety on this budget? Yes it will. This is what most people have had to do for most of the existence of mankind.

As I was working my way through the store, and it was work, I saw ideas for a dozen other dishes inspired by sale items. In most of the world, the average person only eats a very few different dishes regularly and most of their nutrition comes from starch. With this budget, I could feed my family a variety of healthy tasty meals every day of the month, including an assortment of proteins, fruits, and veggies, and it is not overly dependent on starch. It would take planning, it would take work, but it can certainly be done week after week.

Finally, I had a friend who had three children out of wedlock and lived on welfare and food stamps. She also had her costs for undergraduate and graduate school fully covered; therefore, had no student loans to pay back as I do. She lived in her mother’s house and paid no rent. She once told me how irate she was by an experience with food stamps. While she was in the store, the store announced a special on shrimp steamed in the store. She ordered 3lbs of the steamed shrimp, but was outraged when the cashier told her that she could not purchase hot food on food stamps. Her comment to me was, “People on food stamps deserve luxuries too!” My response was, “No they don’t; they deserve to eat.” She was not very happy with me, but I think her attitude illustrates the problem with entitlement programs in this country. Hard working people are sick of those living off of others, still demanding treats while working people sacrifice. My family sacrificed; I sacrificed. Food stamps exist to make sure no child starves; they are not there to make sure that people have luxuries like shrimp and steak.

What can I buy with SNAP food stamps?

Example C: A week long menu for a family of four