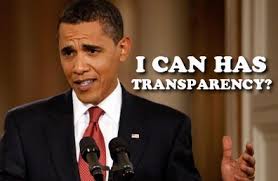 Remember when Obama promised us a transparent administration?

“I will also hold myself as president to a new standard of openness …. Let me say it as simply as I can: Transparency and the rule of law will be the touchstones of this presidency.”

The White House website posted a memo stating the following:

My Administration is committed to creating an unprecedented level of openness in Government. We will work together to ensure the public trust and establish a system of transparency, public participation, and collaboration. Openness will strengthen our democracy and promote efficiency and effectiveness in Government.

Has he kept that promise?

Obama’s White House is arguably the LEAST transparent administration in recent years. CBS’s Sharyl Attkisson posted a series of Tweets that blasted the Obama administration for restricting the access of photojournalists at certain presidential events, “while releasing government photos and videos of the same events”.

This administration supplies their own  photos and videos; why would they want journalists coming in there and interfering?

Politico posted the letter in its entirety. Here are some excerpts:

Journalists are routinely being denied the right to photograph or videotape the President while he is performing his official duties. As surely as if they were placing a hand over a journalist’s camera lens, officials in this administration are blocking the public from having an independent view of important functions of the Executive Branch of government. To be clear, we are talking about Presidential activities of a fundamentally public nature.

The apparent reason for closing certain events to photographers is that these events have been deemed “private.” That rationale, however, is undermined when the White House contemporaneously releases its own photograph of a so-called private event through social media. The restrictions imposed by the White House on photographers covering these events, followed by the routine release by the White House of photographs made by government employees of these same events, is an arbitrary restraint and unwarranted interference on legitimate newsgathering activities. You are, in effect, replacing independent photojournalism with visual press releases.

The letter goes on to list several events to which the press was denied access, stating that “they illustrate the troubling breadth of the restrictions placed upon newsgathering by the White House to record governmental activity of undisputed and wide public interest.”

The lack of transparency issue is also addressed:

The right of journalists to gather the news is most critical when covering government officials acting in their official capacities. Previous administrations have recognized this, and have granted press access to visually cover precisely these types of events, thus creating government transparency. It is clear that the restrictions imposed by your office on photographers undercut the President’s stated desire to continue and broaden that tradition. To exclude the press from these functions is a major break from how previous administrations have worked with the press.

Constitutional concerns raised by the restrictions are mentioned:

As the Supreme Court has stated, the First Amendment protects “the public and the press from abridgment of their rights of access to information about the operation of their government.” The fact that there is no access whatsoever only heightens those concerns. As one court has noted in considering a similar restriction: “The total exclusion of television representatives from White House pool coverage denies the public and the press their limited right of access, guaranteed by the First Amendment of the Constitution of the United States.”

The organizations and individuals signing this letter strongly believe that imposing limits on press access, as your office has done, represents a troubling precedent with a direct and adverse impact on the public’s ability to independently monitor and see what its government is doing.

Obama’s restriction of the free press and crackdowns on journalism are concerning. James Rosen of Fox News was the target of unprecedented spying by the DOJ. The U.S. government also “investigated” the Associated Press, during which the phone lines of 20 journalists were tapped.

He also said the crackdowns are an attempt to “scare… anybody who dares to stand up to the party line, to the agenda line. And this isn’t just the Obama administration. It was the previous administration, and it will be the next administration it’s out of control government. It’s hubris at its worst. And it’s going continue to erode the freedom of this country.”