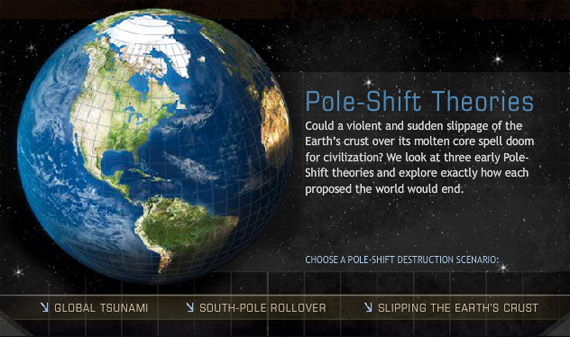 There are two types of pole shift. The terrestrial kind is where the land masses actually move from their current positions to new ones sometimes thousands of kilometers away. Then there’s magnetic pole shift, a flip in the earth’s magnetic field where the North and south Poles exchange places.

Maloof aired his theory on a National Geographic television program in 2009. The geological evidence discovered during the show found rocks in Australia that were ‘born’ thousands of miles away, and Maloof saw this as evidence of violent upheaval.

The rocks had the ‘wrong’ polarity for their situation. As a geologist, he knew that rocks maintain their original polarity from the time they are pushed up from the bowels of the earth until they crumble away to dust millions of years later. Finding rocks that originated thousands of miles north on an island in the Southern Hemisphere offered further proof to him that his theories were correct.

Closer inspection presented him with a major problem though. There was no evidence of any violent upheaval, none, nothing at all to explain how the rocks had arrived in their current location. The pattern was repeated at other sites around the globe. He and his team turned up dozens of examples of rocks that just shouldn’t be where they were finding them. Rocks that originated near the North Pole were marooned in Australia and formations that were known for sure to have started their lives in the Sothern Hemisphere were now located thousands of miles to the north.

Maloof immediately concluded that a terrestrial pole shift couldn’t have happened… but that didn’t explain the out of place rocks.

After thinking about the issue for some time, he hypothesized that terrestrial pole shift could occur after all, but on a scale so slow that we can’t feel it happening. You can hear his explanation on Listen To The story: Talk Of The Nation.

Many scientists do not follow his theory, preferring to believe that the rocks with opposing polarity just came up from the earth’s interior when the magnetic poles were in their opposite position, or that they arrived where they are due to continental drift.

Magnetic pole shift is a different thing entirely. The earth’s crust stays in place, there is no movement of rocks or anything else on the surface of the earth. What changes is the earth’s magnetic field.

The magnetic field around the earth is generated by the movement of molten iron in the outer core. When working properly, it protects us from particle storms, cosmic rays, UV type B radiation, and subatomic particles flying in from deep space. Without it, the ozone layer would be eroded, and we would be exposed to almost everything the universe has to throw at us.

Every few hundred thousand years, the force of the magnetic field reduces until it is almost not there at all, and at this point the magnetic poles flip over, exchanging places. The geological record tells us that there have been many such reversals. The last one is thought to have happened about 780,000 years ago.

Our magnetic field has been weakening for 150 years now, but the weakening is not uniform. Professor Elgil Friis-Christensen, former director of Denmark’s National Space Institute, told the BBC:

“We talk about the weakening of the global field but in some local areas, such as in the South Atlantic, the field has gone down 10% in just the last 20 years. But we do not know whether we will go into a reversal or whether the global field will recover,”

Pole shift is not synchronized. For a while we may have two or more south poles, or north poles, as the field adjusts and settles into its new position. It’s a total unknown as to how long the planet would not have the shielding effects of the field.

No one has yet even guesstimated how long it takes to complete the reversal and for the field to return to normal operating levels.

The magnetic North Pole has been on the move for some time, moving from northern Canada towards Russia at a rate of 25-40 miles a year. The speed of movement has increased during the last decade. This increase coincides with the increase in the weakening of the field.

In an attempt to find out exactly what’s going on with the magnetic field, the European Space Agency (ESA) launched three satellites on the back of a Rocot vehicle from the Plesetsk Cosmodrome at 12:.02 GMT today.

The mission, called SWARM, will monitor the field for between four and five years and hopefully gather enough data for the scientists to see clearly the state of the magnetic field. (source)

A magnetic pole reversal is going to present major problems.

Compasses will be pointing in the wrong direction and GPS satellites will quite literally not be able to work out up from down as they are programmed for our current polarity.

As humans were not around during the last reversal, the effect on animal life and climate is unknown. Will birds instinctively know that they should fly north for the winter…or do they still fly south?  Bees, bats and even mass migrations will most likely be affected.

Will the climate flip at the same time as the poles? Or does that come later? There are so many answers that need to be found and scientists may not have that long to find them.

Magnetic pole shift is a complicated dynamic process. Although no land mass movement will occur, we will still face a time of massive upheaval and uncertainty.

Our food supply is fragile at best, and massive environmental changes will be a challenge that needs to be overcome if we are to avoid a massive human die off.

Ozone, the filter that takes out most ultraviolet B radiation, the type most harmful to human and animals, will be depleted without the magnetic field there to protect it. Skin cancers and severe sunburn will increase. Cateracts and blindness will rise exponentially as the ozone reduces.

One thing we do have the answer to already is that scientists, and most likely politicians as well, are worried. Cash strapped, austerity driven Europe would not be spending tens of millions of dollars putting three satellites into space if they weren’t.

This is a situation we can do nothing about. Governments around the world know it’s started but once again they say nothing. They give no advice about preparing for the future.

The magnetic field has been diminishing for years, and as time moves on the speed of that reduction increases.

Holes in the ozone allow warming of the oceans in those regions to occur.

All this crap we hear about climate change, the explanations about why some areas are experiencing warm seas and rising sea levels, it’s not climate change, it’s the start of magnetic pole shift.

Governments cannot admit this because there’s nothing they can do about it. Instead, they sell global warming in a miserable attempt to mitigate some of the changes that are already happening.