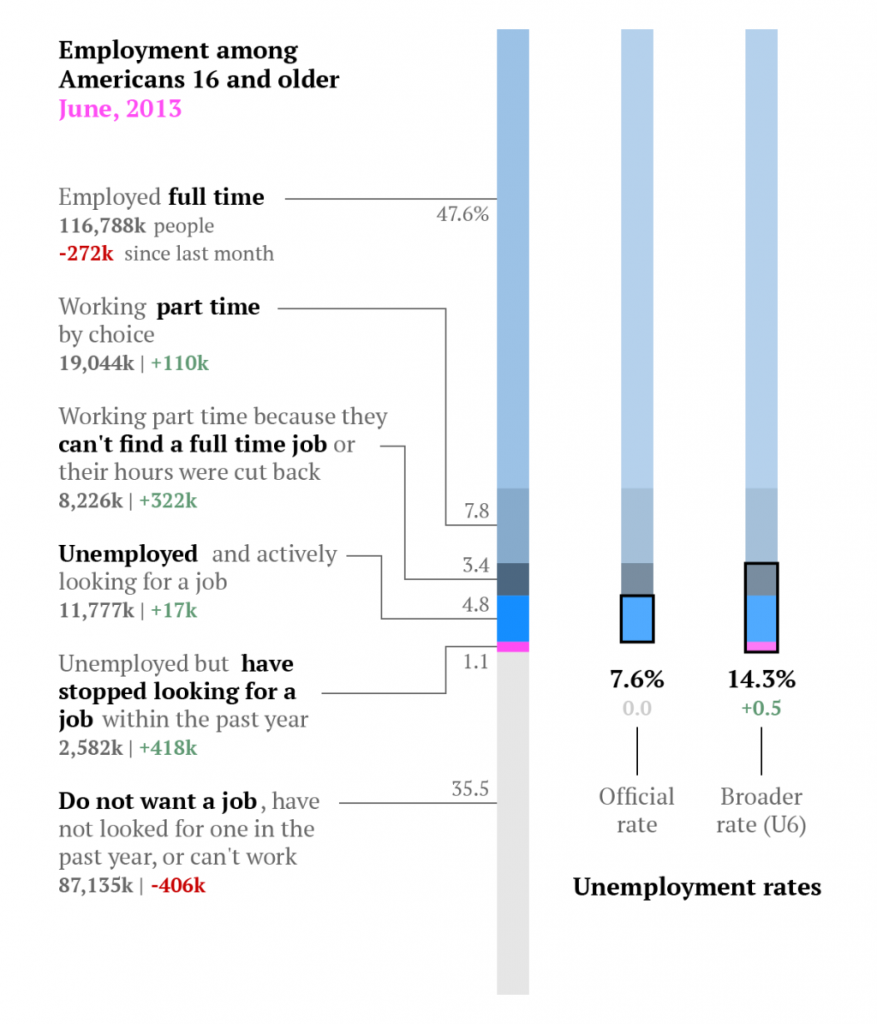 What would you say if I told you that the real unemployment rate in America is at least 30%? Would you call me a tin foil hat conspiracy theorist? Hear me out because I can back up that claim if you will give me a few minutes of your time.

The official unemployment number for last month was 7.3%. A lot of Americans don’t understand how this number is calculated and it is very misleading.

When we speak of a 7.3% official unemployment rate for October of 2013 those numbers are based on U-3. The U-6 number was dramatically higher at 13.8%. Those are not my numbers. That number comes directly from the Bureau of Labor Statistics.

The government doesn’t want to use this 13.8% number because they are afraid how the American people might react.

But what if I told you that the 13.8% number is still way too low? I am not even referencing any Census Bureau cheaters. I am telling you that these numbers are skewed whether Census workers are fudging numbers or not.

I want to show you a chart and I want you to soak it in as much as possible. Take your time because this is something your government will not tell you. The chart is from June but the numbers are pretty close to where they are today.

What many people do not understand is that unemployment rates do not officially include people who are no longer looking for work because they have given up. The rates also do not include those career welfare seekers who should work but refuse to. Are these people not unemployed?

If a lazy 29 year old is living in his Mom’s basement, and playing World of Warcraft all day, is he not unemployed? Just because he wants to mooch off his parents or the system that does not mean he is not unemployed.

Have you ever heard of Investor’s Business Daily? I am sure most have.

Would you agree that this is a credible source for economic data?

Check out what IBD had to say on the subject:

The government’s official unemployment report in September showed 11.3 million people, or about 7.3% of the labor force, without jobs. Not good, but not disastrous, right?

Well, those data exclude a lot of people — particularly the millions of discouraged workers who have simply given up looking for a job. So the real unemployment number is bigger — a lot bigger.

In our IBD/TIPP Poll, we ask a different question: “How many members of your household are currently unemployed and are looking for employment?”

Not surprisingly, the answer we get differs greatly from the government’s data. This month’s survey, completed Thursday night, indicated that 47.9 million Americans are looking for work. No, that’s not a misprint: 47.9 million.

Out of a workforce of 154 million, that yields a gross unemployment rate of 31%. Among all households, 26% have at least one member looking for work.

We also find data on “Job-Sensitive Households” — those with one or more people looking for work plus those saying they’re “concerned” about a member of the household losing a job. That number is 31%, up from 23% as recently as April.

Our country’s labor markets, in short, are in far worse shape than you’ve been led to believe.

Why does the government lie to us about the real numbers? Because they know that if Americans realized how bad it actually is that we would do what Tea Party Patriots are already talking about. We would revolt.

Just because a person is either too lazy to look for work or too discouraged from not being able to find a job for a long time, it does not mean that they have magically ceased to be unemployed.

The truth is that the government lies to you about these things.

And before you jump on the republican band wagon, please understand that most of them are aware of these numbers. They are simply complicit in the cover up. This is not something that started with Obama, but it is worsening under his leadership.

So if you are out of work or underemployed do not take it personally. You aren’t so unmarketable that 92.7% (100% minus 7.3%) of the country can get a job and you can’t. I used to think that. I’m a smart guy. How is it that 93% of people are working and no one wants me?

The truth is that you have a lot of company and you have been lied to.

So are we mad yet?

Are we going to ignore the problem while we drink beer and watch football today?

That’s what the government is counting on. They do not respect us and don’t think we have the guts to take action.

Someday I hope that we prove them wrong.