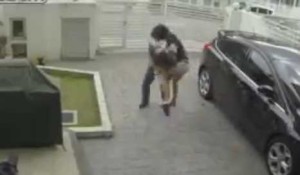 This video from Malaysia shows a young woman pull into a gated area, apparently at a complex in which she lives. Two men, riding on what appears to be a moped, circle behind her and as the gates are closing and she is exiting the vehicle, one of the men jumps off and barely enters the gate, but what awaits him is pretty shocking to him and will cause you to cheer.

The would be thief attempts a snatch and grab, but the young woman holds tightly to her bag.

In an unexpected moment, she gains momentum and leaps at him thrusting her knee into his chest as she pulls him forward by lunging on his back. The two scuffle behind what appears to be a covered grill and the young woman is really “opening up a can” on him.

If it were not for his friend approaching with some sort of blunt weapons, the girl would have seriously left the guy unconscious. However, she flees from the attackers and they leave with their tail between their legs licking their wounds…. and no purse. Suckers!