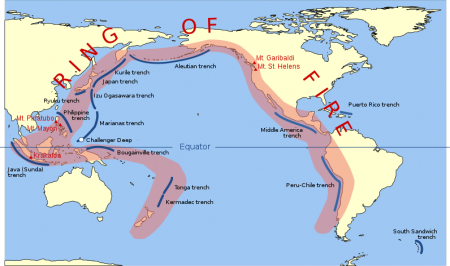 Ten major volcanoes have erupted along the Ring of Fire during the past few months, and the mainstream media in the United States has been strangely silent about this.  But this is a very big deal.  We are seeing eruptions at some volcanoes that have been dormant for decades.  Yes, it is certainly not unusual for two or three major volcanoes along the Ring of Fire to be active at the same time, but what we are witnessing right now is highly unusual.  And if the U.S. media is not concerned about this yet, the truth is that they should be.  Approximately 90 percent of all earthquakes and approximately 80 percent of all volcanic eruptions occur along the Ring of Fire, and it runs directly up the west coast of the United States.  Perhaps if Mt. Rainier in Washington state suddenly exploded or a massive earthquake flattened Los Angeles the mainstream media would wake up.  Most Americans have grown very complacent about these things, but right now we are witnessing volcanic activity almost everywhere else along the Ring of Fire.  It is only a matter of time before it happens here too.

Sadly, most Americans cannot even tell you what the Ring of Fire is.  The following is how Wikipedia defines the “Ring of Fire”…

The Ring of Fire is an area where a large number of earthquakes and volcanic eruptions occur in the basin of the Pacific Ocean. In a 40,000 km (25,000 mi) horseshoe shape, it is associated with a nearly continuous series of oceanic trenches, volcanic arcs, and volcanic belts and/or plate movements.  It has 452 volcanoes and is home to over 75% of the world’s active and dormant volcanoes.

An easy way to think about the Ring of Fire is to imagine a giant red band stretching along the perimeter of the Pacific Ocean.

And yes, that includes the entire west coast of the United States and the entire southern coast of Alaska.

10 major volcanoes along the Ring of Fire have suddenly roared to life in recent months.  The following are short excerpts from news reports about those eruptions…

Volcano creates new island off the coast of Japan: A dramatic volcanic eruption in the Pacific Ocean has created a tiny new islet in Japan’s territorial waters, officials said Thursday, the first time in decades the nation has seen the phenomenon.

The navy spotted smoke about 1,000 kilometres (600 miles) south of Tokyo on Wednesday and Japan’s coastguard later verified the birth of the islet around the Ogasawara island chain.

Video footage showed plumes of smoke and ash billowing from the 200-metre island, and Japan’s coastguard said it was warning vessels to use caution in the area until the eruption cools off.

Mount Sinabung in Indonesia: A volcano in western Indonesia has erupted eight times in just a few hours, “raining down rocks” over a large area and forcing thousands to flee their homes, officials said Sunday.

Mount Sinabung has been erupting on and off since September, but went into overdrive late Saturday and early Sunday, repeatedly spewing out red-hot ash and rocks up to eight kilometres (five miles) into the air.

Colima in Mexico: On Monday night and Tuesday morning, the Colima volcano showed two strong exhalations; ejecting lava down its slopes and ash skyward, that has reached several villages. Since last Sunday, the Volcan de Fuego de Colima was reactivated after several weeks of apparent calm and until Tuesday registered between 30 and 35 puffs per day, spewing lava down its slopes and ash that reached the people of Cheese, municipality of Cuauhtémoc, Colima, and some towns in the state of Jalisco.

Sakurajima in Japan: After a short phase of weaker activity, the volcano began to erupt more violently yesterday with a series of powerful explosions that sent ash plumes up to 15,000 ft (4,5 km). Near-constant ash emissions have been taking place from the Showa crater.

Fuego in Guatemala: Two lava flows are active on the upper slopes of the volcano at the moment, to the Taniluya (south) and Ceniza canyon (SE). The effusive activity started on 11 Nov and increased on 18 November, reaching a length of 600 m. Constant avalanches detach from the flow fronts.  At the same time, explosive activity at the summit crater remained at low to moderate levels, with strombolian explosions that produce ash plumes of up to 800 m height and incandescent jets visible from distance.

Yaser in Vanuatu: Geohazards reports that the volcano continues to produce near-continuous ash emissions while explosions are relatively weak. This phase of ash emissions began on 3 November and are likely to continue into the coming days and weeks.

Popocatepetl in Mexico: The Popocatepetl volcano showcased with a layer of snow was observed throughout the morning and mid-day from the city of Puebla and columns generated by medium-intensity exhalations. According to the monitoring system of the National Center for Disaster Prevention (Cenapred) in the last 24 hours, the colossus presented 57 exhalations of low intensity, probably accompanied by emissions of steam and gas.

Kliuchevskoi on the Kamchatka Peninsula: Kliuchevskoi on the Kamchatka Peninsula in Russia had a busy weekend after its busy week — and a lot of the action was caught on the webcams pointed at the volcano or by satellite. For much of Friday and into Saturday (October 18-19), the volcano continued to produce some vigorous lava fountains and lava flows, mixed in with Strombolian explosions that sent bombs down the slopes of the volcano. This activity was significant enough to cause some aviation alerts even over the western Aleutian Islands.

Why is the Ring of Fire suddenly roaring to life?

And what could this mean for the United States?