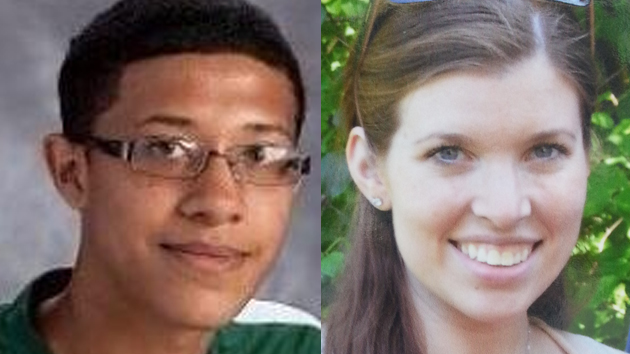 Update: On November 24th, Breitbart News confirms that Philip Chism used a tree branch to rape his teacher. This adds an entirely new dimension to this story. And not just any branch, a three foot long tree branch.  This was not in the original story, since it was not confirmed until after.

The murder of 24-year-old Massachusetts high school teacher Colleen Ritzer on October 22nd, one month ago, sent shock waves across the country. The murder was so horrifying because it was committed by a 14-year-old student named Philip Chism. And the circumstances of the crime were even more chilling, in that Ritzer had asked Chism to stay after school so she could help him prepare for an upcoming math exam. But Philip Chism had other plans. He intended to kill Ms. Ritzer in the most vicious way possible. And he had all the necessary tools with him. The mere thought that a seemingly normal 14-year-old boy could be capable of such a sexually explicit and horrific, premeditated crime is bone chilling.

America, this is an indictment. Philip Chism is a product of a violent and sexually charged culture. Sin is a sickness, and for it there is only one cure. Without Jesus Christ, there is only death and Hell. For a 14-year old boy to imagine rape and murder, and then to carry it out is proof positive that American culture is a vile cesspool. But the blame is on him for carrying it out.

Philip Chism is in court today, and the details of the crime are more sinister and vile than previously believed. It was known before the court proceedings that Chism had killed Ritzer and hid her body in the woods behind the school. But before the court proceedings, the sexual torture that Ritzer experienced at the hands of Chism wasn’t known. But now the full details of the crime are being made known to the public, and it is much worse than anyone could possibly imagine. Philip Chism used a tree branch to sexually torture his teacher.

A note found near the brutalized body of a beloved Massachusetts teacher who police said was raped and killed by one of her students read, “I hate you all.”

This was premeditated murder. And to think that a 14-year-old boy would bring a box cutter, mask, and clothing change to school for the purpose of murdering his teacher is more than one can process. Box cutters are crudely fashioned. This is the weapon of terrorists. The mere mention of a box cutter is a reminder of what the Islamic hijackers used on 9/11. But yet, this was what Chism had determined as his weapon of choice when killing his teacher. It’s sickening.

Chism had followed Ritzer and put “on a gloves and a hood as he followed the unsuspecting teacher to a second-floor bathroom.” This was all captured by surveillance cameras.

There, investigators said, Chism punched Ratzer in the face, raped her with “an object,” and slit her throat with the box cutter.

The object couldn’t be more repulsive. A tree branch from outside. Ritzer had innocently gotten up from the tutoring session to use the bathroom. Chism followed her with the intent of sexually torturing her and killing her with a box cutter. It is believed she suffered near fatal torture before her throat was slit. How is a 14-year-old capable of such atrocity? To murder the beautiful young woman was horrific enough, but to know that she was sexually tortured by this young man, in the most inhuman of ways before he killed her is too repulsive to fully comprehend.

But it gets worse. After brutalizing her in the most horrific, unspeakable way, he robs her dead body.

Chism robbed Ratzer of her credit cards, iPhone, and her underwear, they said. Then he wheeled her body out of the school in a recycling bin and dumped her body in the woods, where he covered her with leaves, authorities said.

Chism was spotted leaving a movie theater about 6:30 p.m. on the day Ritzer was killed, then picked up by police as he walked along a highway in a neighboring town six hours later. Police said they believe Ritzer died sometime after the school day ended at 2 p.m., but they have not said exactly when.

He massacres the young woman, dumps her body, robs her, and then goes to a movie. Philip Chism is barely a teenager and he is committed a crime this cold without a moments regret or remorse. What does this say about America? It says everything. It says we are dead, physically and spiritually. We have lost our souls and we’ve become animals.

Collen Ritzer was a young teacher with a promising future and a family who loved her dearly. By all accounts, she was dedicated to her job and she loved her students. She cared about her students, and noticed Philip Chism needed some guidance before an upcoming exam. And he took her life.

The teen was charged as a juvenile with aggravated rape and armed robbery. He is being held at a Department of Youth Services lockup.

Ritzer’s family released a statement after the indictment was announced. “We are devastated and heartbroken by the details of the horrific circumstances surrounding the death of our beautiful daughter and sister, Colleen,” the family said.

There is no motive in this case. If there was, it wouldn’t matter. There is nothing that could justify a crime of this magnitude. Colleen Ritzer’s life was snuffed out by the very individual she was seeking to guide. Philip Chism was a cold, calculating, sexual deviant. And he isn’t even old enough to have his driver’s permit. This is American culture put under the most damning spotlight.