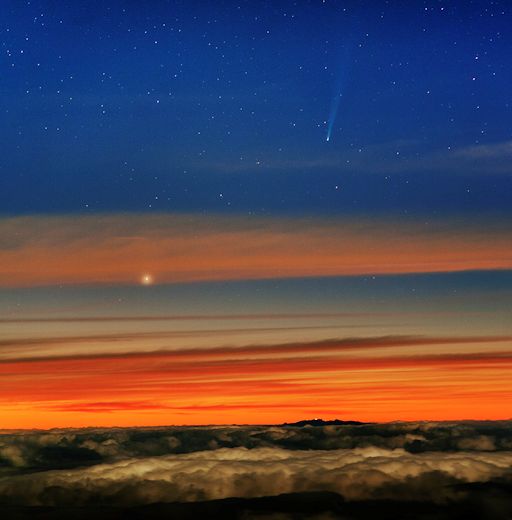 Comet ISON seen in the dawn sky with the planet Mercury in the background. The comets arrive on the heels of the Leonids meteor showers, to create even more spectacles to watch in space.

On Thursday, NASA spotted comet ISON coming on strong. Images captured by NASA’s STEREO (Solar Terrestrial Relations Observatory) show that ISON is still intact. The images also captured comet Encke. The tails of the two comets can be seen wavering as they pass through the sun’s solar wind (particles that stream outward from the sun at 1 million miles per hour).

Double Comets: Battams points out another exciting development: Comet Encke and Comet ISON are converging for a photogenic close encounter. “No they’re not going to hit each other – in reality they are millions of miles apart – but as seen from the STEREO-A spacecraft, they are going to get very close!” he says. “We are probably a couple of days away from seeing two comets almost side-by-side in that camera, with long tails flowing behind them in the solar wind. To say that such an image will be unprecedented is rather an understatement.” Stay tuned for that. – Space Weather