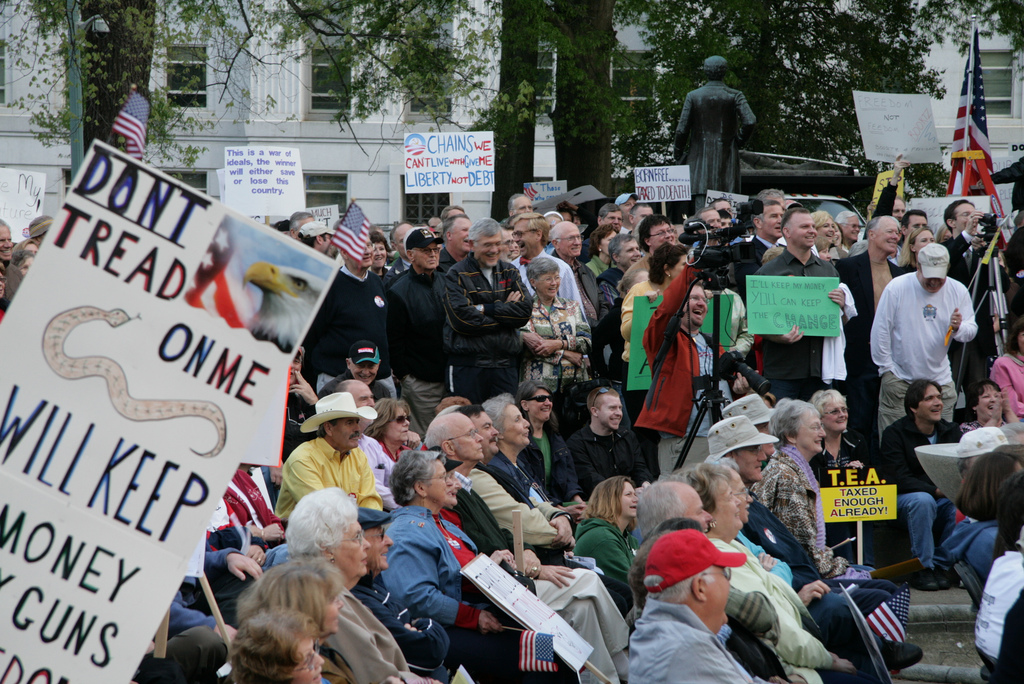 One week ago today a lot of big name speakers and an admittedly small but loyal group of Americans gathered in Washington D.C. for Larry Klayman’s Reclaim America Now event. Behind the scenes I was doing some soul searching. A couple of months ago, when the event was first announced, I got excited and talked about how I wanted to attend. Up until about 3 weeks ago I was still in limbo with my decision.

My decision came down to logic. What would truly be the most beneficial? I decided that the trip would cost around $700-$800 minimum and that I would be much better off to save that money and, if nothing else, invest it in another gun and some more ammo that may be more beneficial at a future time.

Why? Because once again I saw a bunch of people gathering together to protest while having no LEVERAGE in their corner.

I kept my mouth shut for the most part because I don’t want to be that guy who rains on the parade of people who are trying to stand up for this country. I love these people and respect them to their very core. These are Americans who have the courage to stand up and I applaud that, but…

…I think there are more effective ways.

Nonetheless I printed articles about the protest and did my best to support it. I feel that’s what is expected of me and I am happy to do it. I will continue to do that for future protests as well.

But honestly I am not being true to myself if I don’t tell you how I really feel. Because my opinion matters too, at least to me. I can support your protest and at the same time tell you why I don’t think I can find it feasible to personally attend. Fair enough?

The problem with this protest and most others is pretty simple. We are giving the government no reason to listen to us. Evidently Barack Obama has been given until the day after Thanksgiving to leave the White House. If he doesn’t, then what?

Do you understand what I am saying? All of these protests seem to lack one thing that is vital in negotiations. We have no leverage.

“Leave the White House and resign or else…”

No one is willing to go there.

Do you really think Barack Obama is going to wake up one day and say, “You people are right. Geez, what was I thinking? I’m bad for this country. Let me just pack a few things and I will be on my way.”

What I see is a lot of good-hearted people that are out of touch with people like you and I. Most of those speakers that were there probably earn at least $100,000 a year. I do not fault them for that but they may have forgotten what it is like to be the guy who would love to go to Washington but has to put things like diapers and formula and feeding his family ahead of what amounts to a feel good vacation.

That’s all it would have been for me. It would have been a way for me to be around some really good people and recharge and re-motivate. But any good father knows that feeding his family comes first, and most of us know first hand that these protests aren’t doing a lot. They are simply “baby steps.” They help raise some awareness and God Bless them for that. But I can help raise awareness from this chair without having to pay for a plane ticket or hoping my beat up car can make it to D.C. and back. I don’t have to put my family’s finances in jeopardy.

Maybe if I was one of those guys who was selling books and speaking at the conference it would be different. But I’m not. No one calls Dean Garrison for these things. I’m just not that important or popular or respected. If they know me at all they probably think I’m a little wild. I’m the guy that tells people to resist anyone who comes to confiscate your guns. I am not the peaceful Gandhi-type who wants to sit in front of the White House for months on end, and freeze my assets off, while I hold up a sign and beg our government to do the right thing. I’m Joe Average Patriot and I am sick of following methods that have proven to fall short time and time again.

I am sick of the petitions and the protests.

I am sick of the political rhetoric and hype.

I am sick of sending letters and emails that are read by blind eyes if they are read at all.

I am sick of phone calls where the person on the other end is not listening. He or she just asks me where I stand and makes a chicken scratch tally in the “for” or “against” column. Then the Senator in question votes in the way that is most beneficial to them anyway. They vote with the corporate money that elects them.

So what is it going to take?

We all know the answer to that question.

I am just being honest.

I know what it will take but I am not chomping at the bit to “go there.”

Nonetheless, when it goes there I vow to you that you can count on me.

I don’t like this anymore than anyone else. I don’t look to that day through rose-colored glasses and think that everything will be perfect, because it won’t.

It will be very bad for a whole lot of people and a whole lot of families. It will tear this country apart before it ever brings it back together. But leverage does not come without going “all in” and it will have to be by force no matter what shape that force takes.

It has to be revolt and it has to be revolt that hurts the government in power, whether it be by bullet or other means. I will discuss in a minute how leverage is already in play and people may not even recognize it as such.

I am not looking to follow any high profile figure that acts like they have a plan. I am looking to follow my brothers and sisters and support them and die for them if that is what is required. I am looking to follow that guy who can’t put new shoes on his kids’ feet this winter because I can relate to that guy. That guy is me. That guy might be you. He (or she) is that person who has the most to gain and the least to lose here. We simply have no choice. Our lives are being destroyed and we have to do something soon.

People that appear on Meet the Press don’t understand that because they don’t live it.

I realize that some people still think that 2014 and 2016 elections can turn this country around.

2012 held the same promise and it failed to manifest. I am not counting on a corrupt political process to save this country.

The only thing that can save this country now are average men and women of true courage.

We have to be willing to give all, or go “all in,” when the time comes. That is the only way that we can win.

Leverage is a funny thing. There is a good example of it happening right now and it is succeeding in small but promising ways. Few people are signing up for Obamacare and it’s not just because of the website and roll out problems. There are other options for sign up. The truth is that a ton of people are not planning on signing up at all. I talk to them every day. People are saying that they will not comply.

The government, desperate to get our money, is making changes and compromises to try to get us to let loose of some of our monopoly money. This is what happens when people actually do, or in this case fail to do, something. They have no choice but to try to bend because they want our money.

OUR MONEY = THEIR POWER

Whether it is talking with our checkbooks or looking down the barrel of a loaded gun, these are things that demand respect.

We have to stop begging government to take us seriously and give them no choice.

There may be a time in the future when you are asked to make a very important decision that will effect America forever.

Will you die an old slave or risk it all for freedom?

Sometimes you have to be willing to die to know that you have truly lived.

In the end I put my faith in my Creator to show me the way, because I surely can’t trust anyone in Washington to lead. From my standpoint I would apply that to ALL of them. As much as I would like to believe in Rand Paul or Ted Cruz, I have seen some inconsistencies that I do not like and I have been fooled before. Not again. Not for me.

That’s how I feel and I am sorry if that upsets you. I wish that these things we were doing made more of a difference but there comes a time when raising awareness is not enough and you have to try to win.

And what is this article but another example of someone trying to raise awareness but not going there?

At some point we have to be willing to go there.

I believe we can win so long as our hearts are pure and we focus on the only three things that truly matter.

I’d love to hear your opinion. I am begging anyone to show me an easier way. I just don’t believe it’s out there.

The time for begging is past. We take what’s ours and become the change we desire with real LEVERAGE, or we surrender as slaves.

That is our choice.