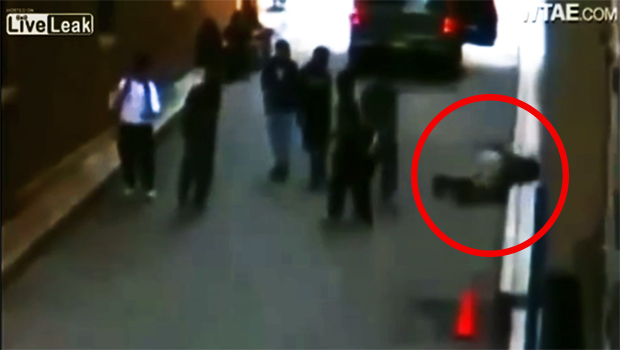 There is a hot new game being played in cities all over America, and it is very simple.  You pick out a defenseless person on the street and you try to knock them out.  In most areas, it is known as “the knockout game”.  In some communities it is called by other names such as “point-em-out, knock-em-out” and “polar bear hunting”.  In many instances, the perpetrators don’t even try to steal anything from the people that they knock out.  The goal is just to “have fun” by brutally attacking an innocent victim.  Well, if this is what young thugs in America will do for fun when times are still good, what will they be willing to do when our economy really starts falling apart?  Yes, the U.S. economy has definitely been steadily declining, but the truth is that what we are experiencing right now is rip-roaring prosperity compared to what is coming in the years ahead.  So what will the streets of America look like when things get really bad?

If you have never heard of “the knockout game” before, the following is how USA Today recently described it…

Dangerous “knockout” attacks on strangers are leading to arrests, more officers flooding the streets and more warnings for vigilance by an unsuspecting public.

Perpetrators have dubbed the violent practice as the “knockout game,” in which young people try to randomly knock out strangers with one punch.

Of course there are variations on the game.  Sometimes the goal is to knock out victims with a single punch, but in other instances entire groups of young thugs attack a victim and the goal is to see who can knock out the victim first.

Most of the time this game does not involve the theft of belongings, but in other cases it does.  For example, the following is how one teen described the game…

“You just knock them out. You hit them with a blow and you take their belongings.”

Most of the time, the victims are males.

But this is not always true.

In fact, the Huffington Post recently reported on an incident in which a 78-year-old grandmother was attacked…

Earlier this month, CBS 2 reported on a series of attacks on Jews in Brooklyn, allegedly part of a disturbing game that has teens punching Jewish adults in an effort to try to knock them over.

Now it appears the action — dubbed the “knockout game” — has spread. Violent videos shot in other cities and in as many as six states, show teenagers knocking into other victims on purpose including, most recently, a 78-year-old grandmother in Brooklyn.

The victim’s daughter said she was walking along in broad daylight when a young African-American male knocked her down. He didn’t take anything, she said, and didn’t seem interested in anything but hitting her as hard as he could before running off.

Sometimes, the victims of “the knockout game” never get back up.  Last year, a 20-year-old college student in Minnesota was killed by a pack of thugs playing the knockout game.  You can see a video news report about that incident right here.

Knockout game deaths have also been reported in Syracuse, in St. Louis and in New Jersey.  In the case in New Jersey, the attackers left 46-year-old Ralph Santiago lodged between iron fence posts with a broken neck…

One victim shown in the footage is a 46-year-old man from Hoboken, N.J., who was found dead with his neck broken and head lodged between iron fence posts, according to NJ.com.

Video surveillance shows Santiago walking in an alleyway in broad daylight, and just as he’s about to pass a pack of teenagers, one launches the fatal, knockout blow.

And what’s the point?

“For the fun of it,” one teen said in the video.

This is not just “harmless fun”.

Sadly, this is just one more sign that our society is starting to come apart at the seams.  Violent crime in America was up 15 percent last year, and an epidemic of very unusual crimes is sweeping the nation.

We are rapidly getting to the point where criminals are becoming so cold-hearted that they will go after just about anyone.  For example, in Stockton, California the other day some thugs held an entire youth soccer team at gunpoint with a shotgun…

It’s a soccer practice hold-up. Kids and the coach were victims of an armed robbery at a park in Stockton.

The team of 16 year olds was practicing on a tennis court when three other teens came up to them with a shotgun and demanded their stuff.

“This park is very dangerous. You can’t trust anyone anymore,” said James Griffin, a neighbor.

Stockton police say an entire team was held at gunpoint and robbed of their cell phones, keys and gym bags during practice.

All of this is happening at a time when police budgets are being deeply cut all over the nation.

If you do call the police, they might be able to help you.  There are still lots of good cops out there.

But if you get a bad cop, you might deeply regret ever picking up that telephone.

Officer Jackie Neal, 40, was in full uniform, in a marked squad car and on-duty when he made a traffic stop Friday morning and sexually assaulted a 19-year-old woman, according to the San Antonio Police Department.

Police said Neal, an 11-year veteran with SAPD, pulled the victim over on the south side and managed to get the woman to stand behind his squad car. What happened next, San Antonio police Chief William McManus described as “unthinkable.”

In this day and age, it has become much more important for all of us to learn how to defend ourselves.  As the U.S. economy spirals downhill, people are going to become increasingly desperate.  And desperate people do desperate things.

The thin veneer of civilization that we all take for granted on a daily basis is beginning to disappear.

Some Americans are choosing to fight back.

Just consider what happened in Seattle the other day…

Robert Moore was ringing-up a customer around 10 p.m. at the Morning Star Mini Mart, located in the 8800 block of 9th Ave SW, when two men entered the store wearing ski masks. One of the men stayed near the entrance of the store while the other attempted robber approached the counter and pointed a gun at Moore.

“This is a robbery,” Moore said the man told him.

Moore then turned to reach for his own gun and that’s when the attempted robbers took off in a white SUV with dark markings toward the rear of the driver’s side and a sun roof.

So how will you respond when the thugs come to your home or your business?