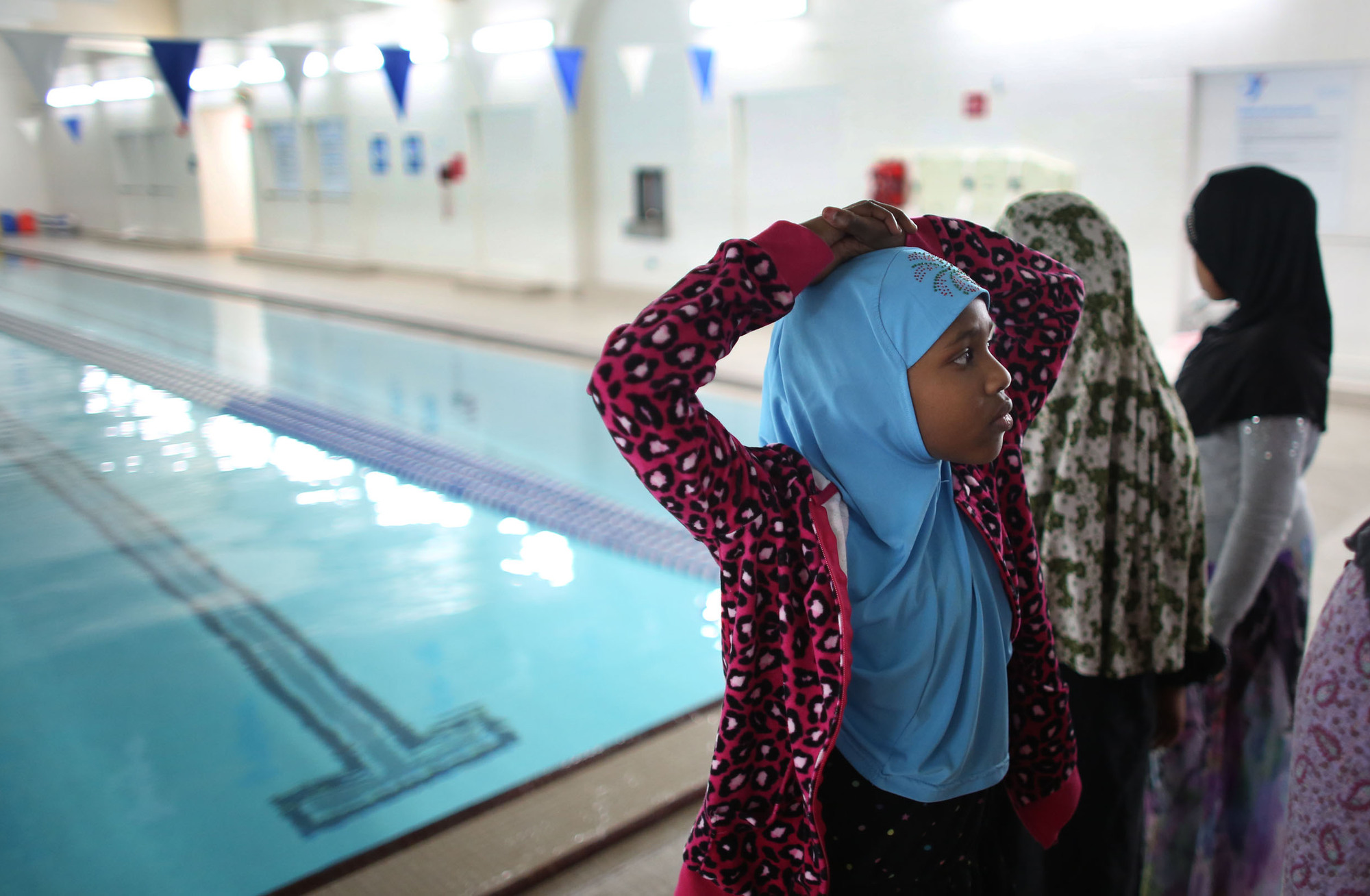 It’s sharia swim time in St. Paul, Minnesota. In order to accompany the special needs of Islamists in the area, the downtown YMCA in St. Paul has started a special one hour “Muslim girls only” swim practice. And in the name of political correctness, the girls are going to learn water safety not in the usual way, but in sharia appropriate manner. They will swim fully clothed, which is a major safety hazard, and have all other “cultural” considerations met. No other group except Islamists would have all of their cultural specifications met for a swim practice. Everyone else would be forced to comply with the basic rules of a public pool. This is Islam at work in America today.

Swimming fully clothed is dangerous. For anyone who has ever swam before or is even remotely familiar with water safety, you can’t do it. First of all, clothes can feel exceptionally heavy in water, and could cause an inexperienced swimmer to drown. Secondly, it is unsanitary. Dirty clothing effects water quality of public pools, leading to further exposure to outside contamination. But yet in spite of all these obvious rules, that everyone is expected to follow, the downtown YMCA in St. Paul is having a sharia-compliant swim hour for Muslim girls only.

Rayan Dhamuke, 12, doesn’t get to swim a lot, unlike her brothers. During the past summer, she had to visit the pool at 5 a.m. so that she would have the privacy she needed to enjoy the water while still adhering to her family’s cultural and religious beliefs.

To better accommodate girls like Dhamuke, the downtown St. Paul YMCA, in partnership with the St. Paul Police Department, has started a swim group for Somali-American girls. The group, which began in October, is serving as an outlet for girls ages 5 to 17 to learn the basics of swimming..

Interesting that the paper would specifically identify the girls as Somali-Americans. They never say “Islamic.” It’s all in the wording and phrasing. If they are going to cater to sharia specific needs, like being fully clothed while swimming, what about other ethnic considerations? Everyone else has to follow the rules. It would be racist and Islamophobic to insist that they adhere to the basic procedural guidelines of public pool swimming.

One evening last week, the din of girls’ laughter and splashes filled the windowless, humid pool room of the St. Paul downtown YMCA.

The group of about 25 girls, who were quiet and reserved earlier in the evening, seemed to come alive while in the water. With each jump, kick and splash, their confidence appeared to grow.

Special considerations have to be made to address modesty concerns so that the Muslim girls can swim and not reveal too much of themselves.

During the hour long swim practice, all other swimmers are cleared out of the pool. The men’s locker room is locked. Female life guards are brought in. The pool, which is on the building’s third floor, has no windows so they don’t have to worry about prying eyes from outside.

This is outrageous that this public pool would go to these lengths, knowing the basic dangerous that exist when swimming fully clothed. Anything can happen in a pool, even for experienced swimmers. But this boils down to being held hostage by Islam. When the minority have the power, all semblance of order falls apart. Sharia has come to America and conquered all.

Now that they allow Muslim girls swim fully clothed, is the International Swimming Federation (FINA) going to change the rules so that ALL female swimmers are to be required to wear full clothing to make the rules fair for Islamic swimmers? This is just a thought. The way everything is moving, this move wouldn’t be surprising.

There are no misprints here. They lock the men’s locker room, they clear out every other swimmer in the pool and bring in only female life guards. This is sharia swim hour for Muslim girls only. Forget safety and hygiene, and forget all the other people who are forced to abide by the rules of a public pool. YMCA’s are funded by government grants and aids, as well as membership fees. And this particular St. Paul project is getting grant money, which should upset a lot of people. If they’re paying any attention at all.

St. Paul Police Chief Tom Smith had discussions with Britts to let the Y know that, through the department’s connections with the Somali-American community, they had learned that such a group was needed.

“I think this is just a great opportunity for them to learn basic skills that we take for granted,” said Sgt. Jennifer O’Donnell, who has worked with the Somali community regularly during her time with the department.

It’s one thing to learn water safety, but everyone has to follow the same rules. But Islam demands sharia compliance, so they got what they wanted. Knowing the climate today, they probably didn’t have to pressure anyone to get what they wanted.

Hani Hussein, who volunteers at the Al-Ihsan Islamic Center in St. Paul, said she looked into reserving public pools for girls, but it was too expensive.

Other metro YMCAs have water safety programs, but they don’t specifically cater to the needs of Somali girls. However, Britts recalled that a YMCA in north Minneapolis did have a Somali girls swim group about a decade ago.

Funding for the group comes from two metrowide water safety grants from Hawkins Inc. and Abbey’s Hope Charitable Foundation. The police department helps provide transportation for the girls to the YMCA.

This is politically correct insanity. Changing all the rules to fit Islamic standards is absurd. And not only that, but funding is coming from metrowide water safety grants. This is the antithesis of water safety. This is sharia submission one-hundred percent. Hard working Americans are paying for sharia-complaint swim lessons for Muslim girls. Thus, there is further proof that tax dollars are being used to fund special pet Islamic projects like this, at the expense of ordinary Americans. This is the United States of Islam.