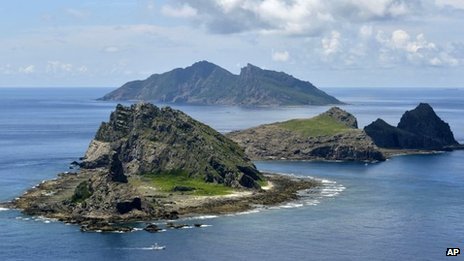 China has created a new ‘air defense identification zone’ over the disputed waters around the islands.

The islands are claimed and controlled by Japan and Japan purchased three of the islands from a private citizen who owned them in September 2012.  China though, still claims the islands are in their territorial waters. The matter is complicated further by a claim that South Korea ’own’ a submerged rock called Leodo and that the Chinese air zone encompasses the Leodo rock.

Taiwan has also laid claim to the small island chain and has declared that it would “defend its sovereignty of the archipelago”.

The air defense zone came into effect on Saturday and China is insisting that all aircraft passing through the zone must:

“maintain two-way radio communications” and “respond in a timely and accurate manner” to identification inquiries, China’s Defence Ministry said. Aircraft that did not follow such rules would be subject to “defensive emergency measures”, the ministry added.

China has said that any attempt by Japan to shoot down the drones it regularly flies over the islands will be considered an act of war and they would react appropriately.

Seoul has said its ownership of Leodo remains unchanged, and it’s ‘unfortunate’ that the chinese air zone includes the rock.

So why all the fuss?

The islands are situated in rich fishing grounds and surveys have revealed that there may be oil pockets under the sea floor in the disputed area.

In 1968 the United Nations commissioned a survey that indicated that the shallow waters between Taiwan and Japan will be major global oil producing area in the future. (source)

There is also the possibility of rich reserves of natural gas in some of the deeper waters and China is fuel hungry. (source)

As expected, the United States are firmly entrenched in the Japanese camp. John Kerry, Secretary of state has said he is “deeply concerned” about the new zone. He said:

“This unilateral action constitutes an attempt to change the status quo in the East China Sea. Escalatory action will only increase tensions in the region and create risks of an incident. We urge China not to implement its threat to take action against aircraft that do not identify themselves or obey orders from Beijing,”

The question is: Would China actually shoot down a Japanese aircraft?