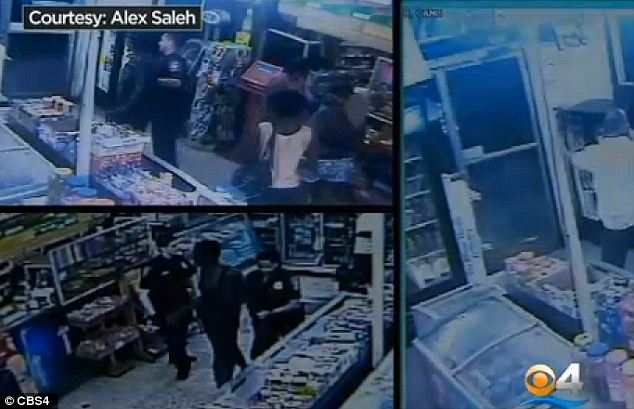 You know the cops have gone wild when a store owner has to install video cameras to film the police instead of the criminals.

But that’s exactly what happened at the 207 Quickstop in Miami Gardens, Florida.

Store owner Alex Saleh got sick and tired of watching police harass his employees on almost a daily basis, going so far as arresting one clerk for trespassing when he was there working.

Earl Sampson has been stopped and questioned by Miami Gardens police 258 times in four years.

He’s been searched more than 100 times. And arrested and jailed 56 times.

Despite his long rap sheet, Sampson, 28, has never been convicted of anything more serious than possession of marijuana.

Almost every citation was issued at the same place: the 207 Quickstop, a convenience store on 207th Street in Miami Gardens.

But Sampson isn’t loitering. He works as a clerk at the Quickstop.

So how can he be trespassing when he works there? (source)

The owner of the store is tired of seeing his customers and employees being bothered by the police, so he installed 15 video cameras to protect himself and his customers… not from everyday criminals because Saleh says he has never been robbed …but from the police, whom he has filmed behaving like mafia enforcers for no other reason than the fact that they have badges and guns.

Since he installed the cameras in June 2012 he has collected more than two dozen videos, some of which have been obtained by the Miami Herald. Those tapes, and Sampson’s 38-page criminal history — including charges never even pursued by prosecutors — raise some troubling questions about the conduct of the city’s police officers.

The videos show, among other things, cops stopping citizens, questioning them, aggressively searching them and arresting them for trespassing when they have permission to be on the premises; officers conducting searches of Saleh’s business without search warrants or permission; using what appears to be excessive force on subjects who are clearly not resisting arrest and filing inaccurate police reports in connection with the arrests. (source)

See one of the videos for yourself.

Saleh said that the police use racial slurs to his customers and treat them like criminals. In the case of Sampson, the man who keeps getting arrested for trespassing, he has been exonerated by evidence on the videos.

One video, recorded on June 26, 2012, shows Sampson, clearly stocking coolers, being interrupted by MGPD Sgt. William Dunaske, who orders him to put his hands behind his back, and then handcuffs him, leads him out of the store and takes him to jail for trespassing.

More than once, Saleh has told police that Sampson is an employee and is not trespassing.

On that June arrest report, obtained by The Herald, police explained the trespass arrest, saying that Sampson was arrested for loitering outside the store when in fact the video, which has a date and time stamp, clearly shows him being handcuffed and arrested inside the store. (source)

Last year, Saleh took his videos to Internal Affairs and reported what was going on. The result? The abuse got even worse, he complained again, and they attempted to intimidate him into silence.

One evening, shortly after he had complained a second time, a squadron of six uniformed Miami Gardens police officers marched into the store, he says. They lined up, shoulder to shoulder, their arms crossed in front of them, blocking two grocery aisles.

“Can I help you?” Saleh recalls asking. It was an entire police detail, known as the department’s Rapid Action Deployment (RAD) squad, whom he had come to know from their frequent arrest sweeps. One went to use the restroom, and five of them stood silently for a full 10 minutes. Then they all marched out. (source)

Although the police department has not been receptive to the complaints, Saleh isn’t backing down. Instead, he and his attorney are filing a federal civil rights lawsuit. The suit contends “that the police department has routinely, under the direction of the city’s top leaders, directed its officers to conduct racial profiling, illegal stops and searches and other activities to cover up illegal misconduct.”

The police department’s harassment campaign against Saleh has grown since they learned of the litigation he is undertaking against them.

Since Saleh has served notice that he is going to sue the city, Sampson hasn’t been arrested, and police are not as active in the store’s parking lot.

But Saleh is mindful of his David vs. Goliath battle with the city’s police department. He worries about his safety, and carries a licensed firearm.

In December, Saleh was followed out of his parking lot by a Miami Gardens police officer, who stopped him after a few blocks. The officer, Carlos Velez, said he stopped Saleh because his tag light was out.

Two other squad cars arrived at the scene, bringing the total number of officers on the scene to six. A police dashboard camera captured it all.

“I thought, you know, there is a lot of serious crime in Miami Gardens,’’ Saleh said. “Why do they need six police officers on a car stop with a burned-out tag light?’’

Another officer, Eddo Trimino, approached Saleh’s passenger side, opened the door and removed a gun that was in a bag containing the store’s money, Saleh said. They ran a check on the gun, which Saleh was licensed to carry.

They cited him for having a bad tag light, tinted windows and bald tires.

The next day, Saleh viewed video of his truck as it pulled out of the parking lot the night before.

His tag light was working. (source)

Howard Simon, the executive director of the Florida ACLU, says that Miami Gardens’ “selective enforcement’’ is a clear violation of civil rights.

“Unfortunately, this is being done all across Florida and the country,’’ Simon said. “I have to say congratulations to the owner of the convenience store for recognizing this is not acceptable and having the courage to stand up and challenge it.’’

Hat Tip to The Survival Sherpa