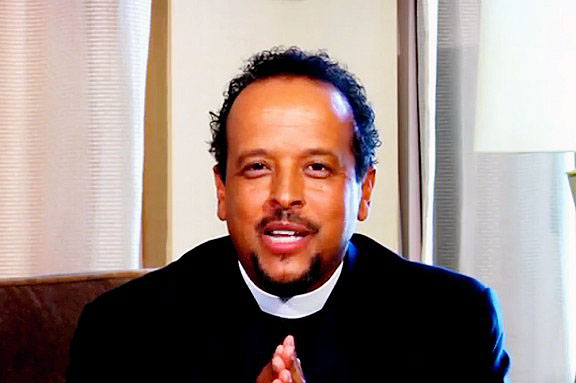 Pastor Aubrey Shines hails from Chicago, much like our Fearless Leader, Barack Obama. But that’s where the resemblance ends. Unlike Obama, Pastor Shines has had the courage to point fingers in the deadly trend of “knockout” that is causing injuries and death across the country. In an opinion piece, published on The Blaze, Shines wrote:

The more the media reports these attacks a few things become clear. First, the perpetrators are young black men. Second, the victims are white and most often Jewish. Because the victims are white, the game is also referred to as polar bear hunting. Third, there has been radio silence from black national leaders condemning the acts. Al Sharpton finally condemned the game at one of his weekly National Action Network meetings. But the outrage pales in comparison to the outrage that Sharpton and his fellow Race Warriors are able to muster when it benefits them financially and politically.

Yep, you read that right. A black man is pointing out what the white mainstream media is failing to explain.  Knockout is a racially motivated hate crime, but since it is black on white, everyone is dancing around the subject.

When researching these shootings, race is never mentioned.    In the alternative media, much of our information comes from mainstream reports.  Unless a photo is published of perpetrator and victim, we are generally unable to find out the races of the people involved. Why?

Because it’s politically incorrect to make members of minorities look like criminals, even when they are.

According to Shines’ essay, statistics show that race is a definite factor, whether it’s polite to mention it or not.

You can be sure if those doing the knocking out were white and the victims were black, Sharpton and the Race Warriors would be demanding 24-hour news coverage. The truth is that while the knockout game is a rather new phenomenon, the problem of black-on-white crime is not. Statistics from all credible sources reveal that whites are the victims of crimes committed by blacks far more frequently than the reverse.

The worst culprit of all, according to Shines, is President Obama, who famously said, “You know, if I had a son, he’d look like Trayvon.”

As much as I would love to hear strong reproaches from these black leaders, the most deafening silence comes from President Barack Obama. Some people have argued that Obama should not weigh in on these issues of race because a white president would not. But Barack Obama is not a white president and we all would be wise to stop pretending that his race does not matter…

…The President has weighed in on issues of race that had far less global consequences in the past. Remember the beer summit with Black Professor Henry Louis Gates and James Crowley, the white police sergeant who arrested him as he entered his own home? Remember the recent response to a reporter’s question where President Obama said if he were the owner, he would change the name fromRedskins? Remember after the Trayvon Martin verdict, President Obama reminded us that if he had a son, he would probably look like Trayvon?

I can think of no better reason for him to talk about a race issue than in an attempt to speak directly to the young men who would look like his son, if he had a son.

When he speaks out, other black leaders will join the chorus and speak out. For that reason alone, President Obama must use his influence to create a ground swell against the immoral foolishness that comes with sucker punching a perfect stranger for sport.  If he doesn’t speak out, Black America will be the ones that are sucker punched in the end.

Shines is correct – black leaders have been resoundingly silent on this matter.  Meanwhile, the criminals are getting younger and younger, and the attacks more brutal.

If this trend was reversed and white kids were punching out elderly black ladies, can you even imagine the hue and cry?  The shouts of “hate crime”?  The blistering essays on liberal news outlets?  No one would say you were a racist for tweeting that a bunch of white thugs beat up an old man with a walker, but in this incidence, we’re supposed to ignore the race of the criminals and the victims. This is every bit as racist as a group of ignorant hillbillies in pointy white hats with a load of gasoline-doused crosses in the back of their pick-up, but we aren’t supposed to make that comparison.

I’m sure that the black leaders feel the same embarrassment that I feel when some white  redneck yahoo goes and burns a cross in some decent family’s front yard because of the color of their skin. They probably feel the same cringe of discomfort that I feel when I overhear some bigoted idiot refer to people of other races by derogatory slurs.  They most likely want to dissociate themselves from people who behave like uncivilized, sociopathic animals who hate and harm based on race, just like I want nothing to do with people like that.

But when you’re in a position of leadership and influence, you don’t get the luxury of turning a blind eye.  Not if you’re truly a leader.  By saying nothing and not denouncing it, you’re accepting this behavior.  By silently accepting it, you’re saying – “This is acceptable.  It is acceptable to punch someone as hard as you can, all in the name of fun, just because they’re white.”

Personally, I have nothing but scorn for the lack of courage shown by these black “leaders” who seem to be blithely oblivious of what these young people are doing.

Way to go,  Obama, Sharpton, and Jackson. With your silence, you are just as guilty of the next assault as those participating in the “game”.