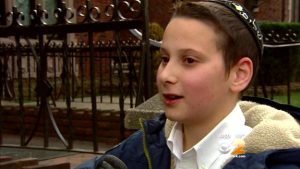 The most recent players in the Knockout “game” are two boys, ages 12 and 13. The participants just keep getting younger in this sick sociopathic trend that is sweeping the country.

The attack took place on November 6 in the Crown Heights area of Brooklyn. The 12 year old victim is a devoutly religious yeshiva student in Brooklyn, New York. His suspected assailant is a 13 year old boy, who was hauled down to the police station by his mother.

The suspect was taken to the 71st Precinct in Crown Heights by his mother, charged with third-degree assault and aggravated harassment and then released back into his mother’s custody, police told 1010 WINS. He is scheduled to appear in court Wednesday. (source)

The suspect denies that he was playing the knockout game, but the victim’s father said that after his son was brutally assaulted by the group of teens, one of them gave “a hysterical, happy shout: ‘We got him.’”

The victim, who prefers to remain anonymous, isn’t hoping for retribution.

A 12-year-old Jewish boy who was a “knockout” victim two weeks ago told CBS 2′s Tony Aiello in an exclusive interview that he’s more interested in an apology than seeing his attackers go to jail.

The yeshiva student, who is devoutly religious, thinks a mandatory moment of silence in public schools would help.

“I think this could have all been prevented,” said the boy, who asked not to be identified.

“The boys and teens would know that there’s always a God watching them, and they wouldn’t only be afraid of the police,” he added. (source)

Disturbing videos are springing up on the net, showing how these degenerate thugs are sucker-punching innocent, unsuspecting people, causing serious injuries and even death. One wannabe assailant is currently in jail, suffering from a gunshot wound inflicted by a person who refused to be a victim.

City streets are no longer safe. Daytime – nighttime – it doesn’t matter. It seems that your only defense is to be alert to groups of young people, to be armed, and to be ready to fight back.