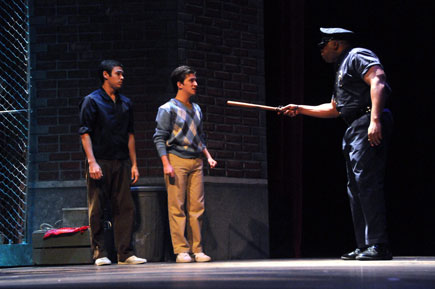 The Broadway musical West Side Story first appeared on stage in 1957. It dealt with members of teenage gangs who were at that time called “juvenile delinquents.” In the song “Gee, Officer Krupke” the gang mocks the then current practice of finding social and psychological expiation for the gang members’ criminal behavior. In one place they sing…

Dear kindly Sergeant Krupke, you gotta understand
It’s just our bringin’ upke that gets us out of hand…

And in other places they explain variously…

Gee, Officer Krupke, we’re very upset
We never had the love that every child oughta get
We ain’t no delinquents, we’re misunderstood
Deep down inside us there is good.

But the reaction to this theory suggests otherwise…

Dear kindly social worker, they say go get job
Like be a soda jerker, which means like be a slob
It’s not I’m antisocial, I’m only anti-work
Glory Osky, that’s why I’m a jerk

In 2013, the term “juvenile delinquents” isn’t heard as often as it was back in 1957, but excuses for often unspeakable crimes remains, and today’s excuses are even more astonishingly illogical than they were in 1957. So-called experts offer a menu of explanations for youth crime, from poor upbringing, to poverty, to lack of opportunity, to a litany of other psychobabble theories for the social malfunction of large numbers of criminal adolescents. The penchant for Liberal tooth gnashing and hand wringing, not to mention the stumbling rush to downgrade the real issues involved in criminal behavior, is still astonishing and agonizingly pervasive. But unlike in 1957, today’s Social Engineers have put into place legal and educational mechanisms that foul up not only the process of justice, thus excusing young criminals, but educational measures which teach the young that crime is not a problem for criminals, but for society. The lack of outcry against the recent practice of “knockouts” is only one, rather meager example.

Liberal sociologists fall all over each other and themselves inventing theories with the same essential rationale: that crime is not committed by evil people, especially by young evil people, but is always the result of some factor which expiates their sins. Upbringing, poverty, sociological displacement, culture and bad home life are all used as excuses. Indeed, some of these may be real factors in the psychological and social development of people who ultimately commit crimes, but they are not excuses for crimes they commit.

Moreover, these theories are put into practice at a very high cost is passed on to taxpayers, whose money is forcibly taken by government and generously handed out in the form of grants to those “experts” to develop yet more absurd theories to excuse crime. One terrible irony is that many of those who pay for those grants have themselves been victims of the criminals they are paying to rehabilitate. Thus, at a painful and often unjust cost to itself, society attempts to rehabilitate and reeducate criminals instead of punishing them justly. These diluted replacements for “punishment” do not work, but in fact, as the lyrics above suggest, they cause criminals, like the juvenile delinquents in the Sondheim song, to ignore the law, not to mention the immorality of crime, because they know that they likely will not suffer the pain of true societal retribution. In fact, as in the song, they disdain both the value of “going straight,” of living a normal life and of holding gainful employment: “I’d be a soda jerker, which means I’d be a slob.” Combine this casual attitude toward socially offensive behavior with the enormous supply of welfare money available under the liberal aegis and you have a recipe for total social collapse.

What we ought to do with violent criminals, even young violent criminals, is throw them into prisons where they will be forced to pay for their crimes, not by working out in weight rooms among their cronies or studying legal texts in the prison’s law library in hopes of finding loopholes with which to win appeals, but by doing hard labor ten hours a day, six days a week, fueled on three daily meals of very plain food that provides enough nourishment to keep them alive and well, but no more! After each day’s labor, they should go back to their cells and sleep, so that they are rested enough to do the next day’s hard labor. There should be no television or leisure game rooms. Criminals are not sent to prison to enjoy the latest sitcom series or develop skills at air hockey. They are there because they have committed serious crimes which hurt innocent people.

And they should be given absolutely no opportunities for commerce with criminal buddies. There should be limited opportunity to do anything that could lead to corruption. Prison should be punishment, pure and simple, and it ought to be something that incarcerated cons, and everyone who learns about their experience, will never forget. Thus, going to prison will serve as the true deterrent to keep everyone outside prison, especially young people, from succumbing to the temptation ever to commit a single crime for the duration of their natural lives! The prospect of prison should strike dread in the hearts of every potential committer of a crime.

We are not talking about some Devil’s Island scenario in which someone is sent to a torture camp for stealing a loaf of bread, where floggings or other forms of corporal punishment are allowed or practiced. Nor are we talking about white collar crime or petty theft. We are talking about violent crime and violent criminals, especially those who murder, rape or maim innocent victims.

Prisons must be clean and properly policed. The current intolerable conditions in most prisons must be eradicated. We do not want prisoners raped by other prisoners, nor do we want them to be subjected to cruel or unusual punishment at the hands of corrupt prison officials. We do not want to brutalize prisoners, despite how brutal many of them have proven to be to their victims. But we do want them to experience prison as prison is meant to be. Remember that we are talking about the incarceration of violent criminals, a category that too often includes adolescents with moral fabric rotted so far beyond repair, that they sometimes commit egregious crimes for “fun” or on a “dare” or as an initiation rite of some criminal enterprise, such as a street gang. Again, take a look at the alarming issue of the “knockouts” and flash mobs.

Rehabilitation that is merely a series of excuses or some tepid form of talk therapy is not real rehabilitation and it does not work as has been proven for decades. This is because, in the real world, rehabilitation is the purpose of punishment. When a person is punished his natural tendency is to avoid doing the thing for which he was punished. In fact, explaining criminal behavior instead of punishing it does not hinder the repetition of bad behavior. It does the opposite. It encourages criminals to believe, indeed to realize, that there is a possibility that they will not be punished at all, or that their punishment will be mitigated by what excuses they can make for having committed those crimes.

Since the decade of the late 50s, when West Side Story appeared, street crime committed by young people, especially by young men, has increased geometrically and has gotten more violent and vicious, and, with the present Liberal tendency to excuse it or explain it away, the prospects for reducing it are not hopeful. We should return to the rational application of actual punishment and abandon the jargonesque sociological theories which may get grant money for some people who invent fancy sounding theories, but which do nothing to solve the societal problem of youth crime. I say, “Come Back, Officer Krupke, and bring your handcuffs and your nightstick with you!”