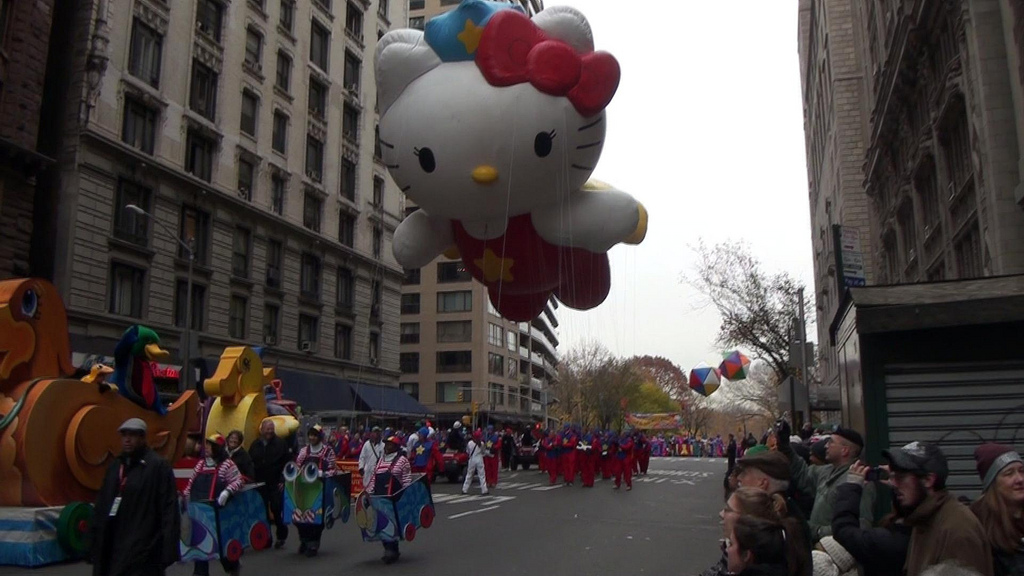 According to an internal, captured document entered into evidence in the Holy Land Foundation Hamas funding trial in Texas, the stated goal of the Muslim Brotherhood in the US is “a kind of grand Jihad in eliminating and destroying the Western civilization from within and sabotaging its miserable house by their hands and the hands of the believers so that it is eliminated and Allah’s religion is made victorious over all other religions.”

And now they’re coming to the Thanksgiving Day Parade to picket on behalf of the Brotherhood regime in Egypt that the free people of Egypt threw out. This is the world Obama has given us.

Yeah, ruin Thanksgiving for us – a delicious, completely American non-dominational  holiday celebrating our good fortune to live in this country. Of course Islamic supremacists intend to crap all over it. It’s what they do. A group of Egyptians sympathetic to former President Mohmamed Morsi are gearing up to stage a demonstration along the Macy’s Thanksgiving Day Parade route in New York City, according to organizers.

Several hundred activists are expected to show up to the march, which is being called “Rabaa on Thanksgiving in Manhattan.”

The name is a reference to Egypt’s Rabaa Square, where backers of Morsi and the Muslim Brotherhood gathered to protest the coup until being violently disbursed by the military in August.

The demonstration “for free Egyptians during the parade of Thanksgiving in Manhattan” will commence on Thursday morning along the parade route at 56th Street and Sixth Avenue, according to an event flier being shared on Facebook and elsewhere.

The flier features a black, four-fingered hand on a yellow background superimposed across Thanksgiving Day floats and a large inflatable turkey. The hand has become the well-known symbol of the pro-Morsi protestors banned from Rabaa Square.

A top leader of EADHR Hany Saqr has been quoted in the Arabic press recently as a senior Muslim Brotherhood leader in the United States. EADHR co-founder Akram Elzand also has ties to group sympathetic to the Brotherhood.

Sherif Ahmed, an Egyptian activist and FEA march organizer, said the demonstrators are outraged by what they say are violent crimes and atrocities carried out by the Egyptian military since Morsi was deposed.

“We thought Thanksgiving Day would be appropriate context to bring awareness to the dire situation of the Egyptian people,” Ahmed told the Washington Free Beacon.

“We are trying to rally for the cause of human rights and democracy in Egypt in light of the recent coup that took place,” according to Ahmed, who said he was personally critical of Morsi’s rule. “It’s a very violent, bloody military coup.”

Ahmed praised the popular revolution that swept Morsi into power and explained that activists have been holding similar rallies across the Eastern seaboard in recent weeks to bring attention to the “very bad situation” in Egypt.

Bloody clashes between Muslim Brotherhood-aligned protestors and the Egyptian military have carried on for months, killing many across the country.

Demonstrators in New York City say they will join together in yellow shirts, the color associated with pro-Morsi protestors in Rabaa Square.

Ahmed insisted that not all of the demonstrators are supporters of Morsi and the Muslim Brotherhood. Many, in fact, were critical of Morsi, he said.

“We’re a diverse group, many different backgrounds,” and not of one single opinion, he said. “Some of them are supporters of the president and party where he comes from. But there’s a lot of people who are not.”

“What we agree on was the way he was deposed and the way the military took over … We support the idea of an elected president,” Ahmed said. “We’re anti-coup period. We don’t want the military to come back, simple as that.”

Ahmed said that “if there’s a picture of the president [Morsi displayed at the rally], it’s the idea of an elected president” that demonstrators are backing.

Asked why activists chose Thanksgiving Day to hold their demonstration, Ahmed said that they “aspire to leverage the media coverage” to push the issue of democracy in Egypt.

“Our concern, unfortunately, hasn’t received a lot of support from the [Obama] administration,” he said.

For Ahmed, the rally is personal.

Many of his friends and family have been seized by the Egyptian military, he said.

“Many of my friends, people that I grew up with, many of my fellow members in the organization” have had relatives detained by the military, he said. “For people [in Egypt] to express any sort of opinion, they’re subject to physical harm, extreme physical harm.”

Some said it is inappropriate for the Egyptian activists to demonstrate during one of America’s biggest holidays.