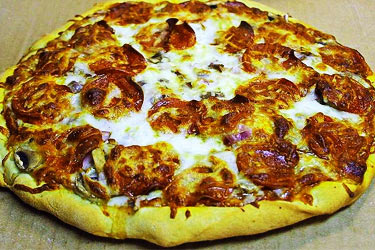 Tony Rohr, General Manager of the Jackson Boulevard Pizza Hut in Elkhart, Ind. has been fired after he refused to open his Pizza Hut store and require his employees to work on Thanksgiving.

Normally the Pizza Hut Rohr manages is closed only two days out of the entire year — Thanksgiving and Christmas Day.

This year, however, he was told keeping the Pizza Hut open on Thanksgiving would be mandatory. Company decision.

Rohr says he was told to sign a letter of resignation.

He refused…instead he  wrote a letter explaining his position to his boss.

In the letter he wrote, “I am not quitting. I do not resign, however I accept that the refusal to comply with this greedy, immoral request means the end of my tenure with this company.”

“I hope you realize that it’s the people at the bottom of the totem pole that make your life possible,” his letter went on to say. (source)

After hearing this story, my first thought was who in the hell is buying Pizza Hut pizza on Thanksgiving anyway??? That’s just sad. Sadder than people having to work at Pizza Hut on Thanksgiving. I’m sure that Pizza Hut is just in such high demand on turkey day. Do they have a special turkey pizza? Mmm. Appetizing. (That was sarcasm.)

To whomever that is who simply can’t help themselves but to order Pizza Hut on Thanksgiving: you might want to seriously consider reevaluating your life just a touch. And your health. And perhaps consider the fact that those Pizza Hut employees who are being forced away from their families to make your pizza on Thanksgiving might just add a few extra “special ingredients” on your pizza than you asked for.

Thanksgiving used to be a guaranteed time that people could spend off with their families in this country. It seems each year for many now, the faith-in-humanity murdering insanity that is Black Friday has been creeping up and taking over actual Thanksgiving, forming a Gray (now nearly black) Thursday.

This year it’s so bad, a slew of anti-consumerism petitions are burning across social media platforms, with people vowing to boycott shopping on Thanksgiving. One badge, which states “Because I believe in family… I pledge to not shop on Thanksgiving. If I’m shopping, someone else is working and not spending time with their family. Everyone deserves a holiday,” has been shared on Facebook nearly a million times as of today.

Of course, that’s not going to stop Kmart stores from opening their doors at 6 a.m. Thanksgiving morning to stay open for 41 straight hours right through Black Friday.

After all, millions of Americans just can’t live without their cheap Chinese slave-made toasters.