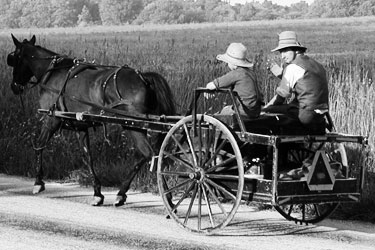 Back in October, The Daily Sheeple reported that a court of appeals was going to force a 10-year-old Amish girl from Ohio to take chemotherapy treatments for her leukemia after her family opted to seek alternative treatments.

Now that family has taken the girl and fled the country.

The parents initially fought the treatments because they were making their little girl, Sarah Hershberger, severely ill, but the hospital decided to take the parents to court over their decision to look for natural cancer cures outside the Big Pharma model. Even though a juvenile judge twice ruled to uphold the parents’ rights, Akron Children’s Hospital took the case to an appeals court which overturned the previous rulings.

The parents have said they are more concerned that Sarah will suffer more from the chemo’s horrible side effects than if she died being treated with natural remedies.

“We’ve seen how sick it makes her,” Andy Hershberger, Sarah’s father, told ABC News in August. “Our belief is the natural stuff will do just as much as that stuff if it’s God’s will.”
…

But the State doesn’t see it that way, and the government ultimately usurped the parents’ rights in deciding what is best for their child.

The court ruled that an attorney who’s also a registered nurse should be granted limited guardianship over the girl, Sarah Hershberger, and the power to make medical decisions for her.

The beliefs and convictions of the parents can’t outweigh the rights of the state to protect the child, the court said. It also ordered that the guardian should be appointed right away. (source)

According to ABC News, the hospital has not commented on whether or not it will seek further legal action, and there is no official law enforcement search underway for the family at this time. The Hershbergers have said they do not plan to return to the country any time soon.

The Hershbergers also say Sarah’s condition has improved since they switched to alternative medicine.