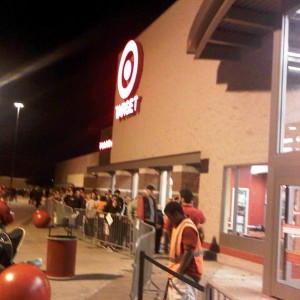 It has been called “America’s most disturbing holiday”.  Black Friday is the day when millions of average Americans wait outside retail stores in the middle of the night in the freezing cold to spend more money that they do not have for more cheap Chinese-made products that they do not need.  It is a day when the rest of the world makes fun of Americans for behaving like “rabid animals” and “zombies” as we indulge in a tsunami of greed.  It truly is a shameful orgy of materialism for a morally bankrupt nation.  It is being projected that approximately 140 million Americans will participate in this disgusting national ritual this year.  Sadly, most of them have absolutely no idea that they are actively participating in the destruction of the economic infrastructure of the United States.  If you don’t understand why this is true, please be sure to read this entire article all the way to the end.

The amount of merchandise that is purchased on Black Friday is absolutely staggering.  For example, just consider how much stuff is soldat Wal-Mart alone…

Wal-Mart said it recorded more than 10 million register transactions between 6 p.m. and 10 p.m. Thursday in its stores and nearly 400 million page views that day on walmart.com. It sold 2.8 million towels, 2 million televisions, 1.4 million tablets, 300,000 bicycles and 1.9 million dolls. Big-ticket electronics like big-screen TVs and new videogame consoles were among the top sellers.

But each and every year, Black Friday also seems to bring out the worst in many people, and this year was certainly no exception.  The following are just a few of the national headlines about the rioting and the violence that we witnessed…

-“Two Arrested After Stabbing Over Parking Space At Wal-Mart”

And sometimes the violence extends out into the parking lots and into the surrounding neighborhoods.  In Las Vegas, a man that was carrying a big-screen television home from Target was shot in the leg…

According to police, a man purchased a big-screen television from the Target store near Flamingo Rd. and Maryland Pkwy. While he was walking to a nearby apartment complex, a man approached and fired a warning shot, causing the victim to drop the television, police said.

Officers tell 8 News NOW the gunman then took the television to a nearby car that was waiting, where a second man helped the gunman load the TV into the car.

The victim approached the two men and tried to get the television back. That prompted the gunman to fire several more rounds, shooting the victim in the leg.

Every year I go over to YouTube to check out the madness that breaks out on Black Friday night all over the nation.  Posted below is the best compilation video from Black Friday that I could find.  In particular, I love how this video compares American shoppers to zombies…

And there is one more video that I wanted to share with you.  In this video, activist Mark Dice dresses up like Santa Claus and mocks Black Friday shoppers for being “parasites” and for ruining Thanksgiving…

Meanwhile, as retail stores all over America actively encourage this zombie-like behavior, police are actually cracking down on other groups of Americans that are actively trying to make this country a better place.  For example, a Christian group in Lake Worth, Florida was kicked out of a public park for trying to feed the homeless on Thanksgiving.  Of course this kind of thing happens all the time.  In fact, dozens of major cities all over the country have now passed laws that make it illegal to feed the homeless.  For much more on this, please see my previous article entitled “One Lawmaker Is Literally Smashing The Belongings Of The Homeless With A Sledgehammer“.

At the beginning of this article, I stated that those who go shopping on Black Friday “are actively participating in the destruction of the economic infrastructure of the United States”.

How could that possibly be?

Aren’t they helping the economy by spending their money?

Actually, it isn’t that simple.

Just think about it for a moment.  Where are most of the “advertised specials” that people go crazy over on Black Friday actually made?

If you guessed “China”, you would be correct.  In fact, it is very difficult to find any “Black Friday specials” that are actually made in the United States.

When you buy stuff made in China, you support workers and businesses in China.  As I mentioned in a recent article, the U.S. economy loses approximately 9,000 jobs for every 1 billion dollars of goods that are imported from overseas.

Overall, the U.S. has run a total trade deficit with the rest of the world of more than 8 trillion dollars since 1975.

So when you look around and see lots of unemployed people, it should not be a surprise to you.

Right now, the labor force participation rate is at a 35-year-low and more than 102 million working age Americans do not have a job.  That number has increased by 27 million just since the year 2000.

Because the American people are not supporting American businesses, our formerly great manufacturing cities are being transformed into rotting, festering hellholes.  Just take a look at Detroit.  At one time Detroit had the highest per capita income in the entire nation, but now it is a dying, bankrupt ghost town.

And of course this is happening to manufacturing cities all over the nation.  Since 2001, more than 56,000 manufacturing facilities in the U.S. have permanently shut down and we have lost millions upon millions of good paying manufacturing jobs.

Good job America.  And the following are some more facts from one of my previous articles about how our massively bloated trade deficit is absolutely killing our economy…

-According to Professor Alan Blinder of Princeton University, 40 million more U.S. jobs could be sent offshore over the next two decades if current trends continue.

Unfortunately, most Americans never stop to think about what happens when we buy stuff from China.

When we buy stuff from them, our money goes over there.

At this point, they are sitting on trillions of our dollars and they have purchased more than a trillion dollars of our debt.

Up until now, Chinese demand for our dollars has helped keep the value of the U.S. dollar artificially high.  This is one of the reasons why Wal-Mart can sell you those Chinese imports so inexpensively.

And up until now, Chinese demand for our debt has helped keep long-term interest rates artificially low.  So the U.S. government has been able to borrow money at ridiculously low interest rates and U.S. home buyers have been able to get mortgage rates that are well below the real rate of inflation.

So enjoy those super cheap “Black Friday specials” while they last.  That era is rapidly coming to an end.

Now that the Chinese have stolen tens of thousands of our businesses, millions of our jobs and trillions of our dollars, perhaps they feel that there is not much more looting to be done.  Our economic infrastructure has been essentially gutted at this point.  Moving forward, China can afford to let the value of the U.S. dollar fall and the value of their own currency rise because even Barack Obama admits that “those jobs are never coming back”.

And every single American that went shopping on Black Friday and bought Chinese-made goods actively participated in the ongoing destruction of the U.S. economy.

Good job America.  You are a nation that is utterly consumed by materialism and greed, and you don’t even realize that you are destroying yourself with your own foolishness.