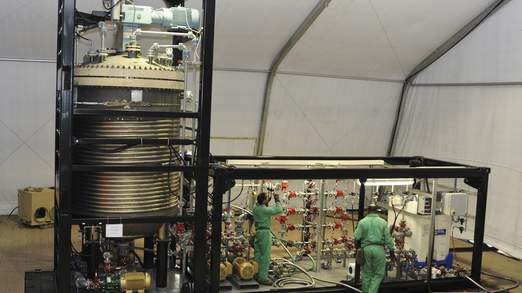 The United States government is thinking of destroying the chemical weapons found in Syria on a ship floating in the Mediterranean Sea.

The Defense Threat Reduction Agency, an arm of the Pentagon, apparently has a machine to do the job. The Field Deployable Hydrolysis System uses a titanium reactor, hot water and ‘other chemicals’ to render the chemicals in the weapons useless…as weapons.

Are you following this? Good because I’m struggling a bit.

So, after treating and heating the chemical weapons with more non-weaponized chemicals, the weapons are no longer weapons but chemical laden water is still water laden with chemicals…where are they going to dump that then?

Well, as the MV Cape Ray will be anchored in the Mediterranean while the operation to destroy the chemical weapons is going on, I’ll give you one guess.

There has been no comment about what chemicals will be left in the water at the end of the process, and no official statement of where the residue will be disposed of, but you can bet your life it won’t be anywhere that the Obama’s like to swim.