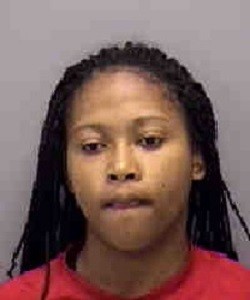 A 15 year old Florida girl has been arrested for two Knockout “Game” attacks on elderly men. Even more horrifying than the random assaults that occur when people are out in public, these men were at their own homes when they were brutalized.

Cellphone pictures taken by a concerned neighbor helped identify Traveshia Blanks, of Fort Myers, Florida, who was part of a group of teenagers who randomly attacked a 72 year old man who was working in his yard.

“I was in shock. Who would expect anything from out of the blue to happen like that. There’s no reason had I done something or said something,” said the 72-year-old Fort Myers victim.

The victim stated that while he was weeding his garden, someone kicked him from behind, knocking him to the ground. The victim says he saw a teenage girl laughing at him before she walked back to join a larger group of teens.

“I didn’t hear anything. There was nobody in the area at all. It was very quiet [when] all of a sudden I felt a blow to my hip and I was on the ground. I turned around to see what happened and there was a girl standing there laughing,” he said. (source)

This video is made even more disturbing by the sound of perverse laughter as the teenage girl struck the elderly man.
NBC-2.com WBBH News for Fort Myers, Cape Coral

Reports of this attack prompted a second elderly victim to come forward. An 89 year old man reported that he answered a knock at his door and was struck in the face by a laughing teenage girl.

Harry Hurvitz, 89, told deputies that someone rang his doorbell, and he looked and saw several well-dressed teens standing outside his door and one of them appeared to be holding a cell phone or camera.

When he opened the door, one of the juveniles suddenly and without provocation slapped him in the face.

“I stepped out to see what she was pointing to and there was another girl standing here and wammmmmm,” explained Hurvitz.

The entire group then fled, laughing as they ran toward Principia Drive.

Hurvitz says he doesn’t want the teen behind bars, saying she needs treatment instead. (source)

Horrifyingly, when interviewed, teens at a nearby high school don’t seem to believe that the attackers did anything wrong.  This sociopathic behavior, completely bereft of motive or regard for others, is seen as “fun”.  One student told NBC-2 News, “I’m not gonna say it’s not right and it’s not fun, because it is fun.”

Knockout, a so-called “game”, is a deadly new trend of a member of a group of hoodlums assaulting a random stranger just to see if he can knock the innocent party unconscious in one blow. If the one blow is not sufficient, no worries – the fun isn’t over. The hoodlums then proceed to beat the living daylights out of the victim.  Many times the assaults are videotaped and posted online.

The crimes are predominantly black on white, although this distinction is rarely pointed out by the mainstream media. In fact, race has been so assiduously ignored that if mug shots and victim photos were not included in some of the news reports, the sick trend of blacks assaulting whites would have gone unmentioned.

Mr. Hurvitz, the 89 year old man who was assaulted at his front door, said that he was glad it was him and not one of the elderly women in the neighborhood.  ”There are lots of old ladies here who have guns and revolvers in their possession and will not open the door unless they are fully armed,” he said. “And they will just let loose.”

Perhaps that is exactly what needs to happen to put an end to this.  Let’s see how much “fun” the “game” is when teenagers start getting shot dead.