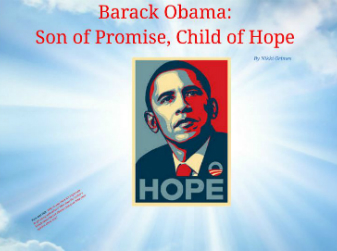 Third graders are being indoctrinated into believing that Barack Obama is the messiah. A Common Core approved lesson plan, based on the book “Barack Obama: Son of Promise, Child of Hope,” by Nikki Grimes, paints Obama in a messianic light. Common Core is evil personified. Unabashedly indoctrinating budding jihadists into the glories of Islam, now elementary teachers have the option of adopting a lesson plan entitled “Barack Obama Lesson Plan and Prezi” based on the book by Grimes. If seeing is believing, this is proof that Obama is the new Hitler. An abject failure, he is still being propped up as a mythical savior. This is sickness, and an affront to the one and only true God.

The creepiness of this audio video is not something that one can easily shake off. First, Common Core instills in students the idea that white people would never vote for a black person. The preposterous evil of “white privilege” must be ingrained in young minds from an early age so they can be controlled and manipulated. Original individual thought is the evil in Common Core. Everyone must be the same. White people must know that they have the advantage by just being born. It’s repulsive, but the to elevate Barack Obama to the level of a “Messiah” is blasphemous.

In Common Core Nazi fashion, the obvious step is to create complete lesson plans around the idea that Obama is a savior. This liar of epic proportions not seen in an American President past or present is being made into a golden calf to worship. A counterfeit god.

But that is precisely what “Barack Obama: Son of Promise, Child of Hope” seeks to do. Paint this vile man as a messianic figure, and force children to believe it.

The Lesson Plan is Outlined As Such:

“Barack Obama: Son of Promise, Child of Hope,” written by Nikki Grimes is the story of Barack Obama and his diverse upbringing. The story uses colorful words and vivid descriptions to provide the reader with the inspiring story of Barack’s life. (Grades 3-5)

Included in the package:

Sherece Bennett is the author of the actual lesson plan and video presentation. Adopting Grimes’s book into an elementary school lesson plan is ideally suited for Common Core. Worse, the book was New York Times best seller, as it is a “mythical” interpretation of Obama’s life. It’s more than imaginary, it’s disturbing in its elevation of a man as a god.

In one passage, a young Obama sees beggars and wonders, “Will I ever be able to help people like these?”

“Hope hung deep inside of him,” the book adds.

Another excerpt from the book reads: “Before dawn each morning, Barry rose – his mother’s voice driving him from dream land. ‘Time for learning English grammar and the Golden Rule. Be honest, be kind, be fair,’ she taught him.”

The story continues: “One morning, he slipped on the name he’d been born with. The name of his father, Barack. For the first time in his life, he wore it proudly – like a coat of many colors.”

No story about Barack Obama would be complete without mentioning his work as a community organizer. The book describes those days in dramatic fashion:

“The work was grueling, with stretches of failure, and puny patches of success. Door-to-door Barack went, early mornings, late nights, pleading and preaching, coaxing strangers to march together, to make life better for everyone.

“He worked as hard as a farmer, planting the words ‘Yes, we can!’ like seeds in spring.

“Impatient, Barack kept wondering if those seeds would ever sprout. He worried that the hope in him would fade away.”

This is obscene. America’s greatest failure is being lauded as a more than a man. He’s a figure worthy of adoration. This is what children do in Communist Cuba and Venezuela. The Quran is indoctrination into Islamic jihad. Hitler was worshiped in Nazi Germany. But in a sick twist, Obama is seen as a “Messiah” by man, mostly in the black community.

Rev. Jesse Lee Peterson wrote: “President Barack Obama is the most divisive man to ever occupy the White House – period! Yet, 95 percent of black Americans worship him as if he’s the messiah. Why?”

The only thing Obama has done is sow discord and manufacture chaos. He’s reckless, divisive, and tyrannical. This is worthy of messianic worship? In a world turned upside down and inside out, this dictator is deemed a “savior” with Common Core approval.