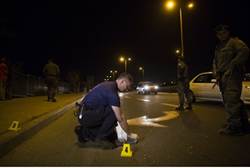 There is no peace with the Islamists of Palestine. A brutal rock attack happened on Thursday in Jerusalem, and a two-year-old Israeli toddler was seriously injured. The little girl was pelted by Islamic thugs with a three-pound rock to the head. In the Jewish neighborhood of Armon Hanatziv, located on the Green Line which separates the West Bank from pre-1967 Israel, the little girl was hit by a rock that went through a passenger window of the car she was riding in. The violence is unending and the culprits are always the same. The Islamic “Palestinians” are forever waging war against Israelis. A rock is a dangerous weapon that can cause significant damage to a person hit by it, especially a small child. In this war, there is no one who remains untouched by the Islamic mercenaries.

In this incident, it’s an innocent Israeli toddler who got caught in the crossfire. A two-year old whose life might be forever altered by a severe blow to the head. A three-pound rock can a dangerous weapon in the right hands. If a sucker punch can cause death, a rock can surely inflict every bit as much damage to an unsuspecting victim.

The girl, 2, identified as Avigayil, was hit in the head Thursday evening while traveling through the Jewish neighborhood of Armon Hanatziv. The child, who reportedly lost consciousness after the blow, was taken to Hadassah Ein Kerem hospital where her condition was identified as serious. She regained consciousness and her condition was upgraded to moderate, according to Haaretz.

Paramedics who responded on the scene evacuated the girl to the Hadassah Ein Kerem Medical Center.

“When we arrived on the scene we saw a woman holding a 2-year-old baby girl whose head was bleeding,” said Raphael Herbst, a paramedic who treated the infant. “While we were treating her on the way to the hospital, she began recuperating and regained consciousness,” he added.

The violence in the area has increased significantly in the recent months and weeks. Though forever blamed on the issue of Israelis building more settlements, the cause is Islam. Israelis do nothing to incite such violence from their hostile neighbors except for being there. With the recent prisoner release of dangerous Islamic terrorists, the violent acts against innocent Jews are  likely to increase in number. The recent murder of a sleeping Israeli soldier by a Palestinian Islamist is a terrifying example of what is to come. Thursday’s rock attack was brutal and senseless, with the innocent victim being an Israeli toddler. Hopefully she will recover fully, but there is always a question with significant head injuries.

Prime Minister Benjamin Netanyahu said following the attack that Israel’s security forces “will find these criminals and bring them to justice.” Speaking at a Hanukkah candle lighting ceremony at the Western Wall, Netanyahu added that “the first thing I would like to do on this evening is to wish a speedy recovery to the little baby who was wounded by criminals here in Jerusalem.”

Jerusalem Mayor Nir Barkat visited the toddler’s family. “It must be made clear that a rock is a weapon, and should be treated as such.”

A rock is more than a dangerous weapon. It is lethal. Had it hit the baby head on and not through a car window, she could have died on the spot. This is the essence of cruelty. Any blow to the head can be deadly in an instant. This should be treated as a serious offense.

It is believed that the incident was nationalistically motivated, with some media reporting that the rock may have been thrown from the adjacent Arab neighborhood of Sur Baher.

The State Prosecutor’s Office has brought charges against several minors this week, alleging that they belong to a gang that hurled firebombs in the city’s French Hill neighborhood and toward the Hadassah Mt. Scopus Medical Center. The defendants are residents of the East Jerusalem neighborhood of Isawiyah.

The hospital has recently begun building a stone fence between the facility and the neighborhood.

The problem with the fence is that it is causing problems for drivers on nearby roads. But with the violence increasing, and the security of the hospital of utmost importance, there are few options available. The fundamental issue is Islam and hatred for Jews, for all infidels. In the meantime, more innocents will be killed. For this Israeli toddler seriously injured by a three-pound rock, the damage is already done. The hope is that she recovers fully without suffering any permanent damage.