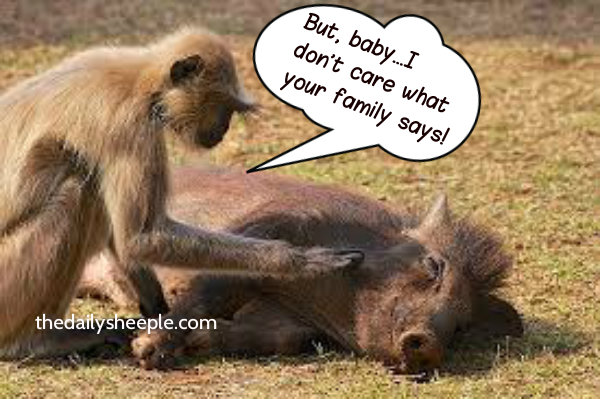 A new hypothesis that makes Darwin’s theory of evolution look positively pleasant in comparison is certain to incite rage amongst Creationists.

A pig and a chimpanzee went into a bar and….

Okay – for real: Dr. Eugene McCarthy, a geneticist from the University of Georgia, believes that humans evolved from a rather mindboggling sexual encounter between an ancient chimpanzee and a prehistoric pig.

He points out that while humans have many features in common with chimps, we also have a large number of distinguishing characteristics not found in any other primates.

Dr. McCarthy says these divergent characteristics are most likely the result of a hybrid origin at some point far back in human evolutionary history.

What’s more, he suggests, there is one animal that has all of the traits which distinguish humans from our primate cousins in the animal kingdom.

‘What is this other animal that has all these traits?’ he asks rhetorically. ‘The answer is Sus scrofa, the ordinary pig.’

However, as Dr. McCarthy points out, despite this genetic similarity, there are a massive number of divergent anatomical characteristics distinguishing the two species. (source)

Wow – and you thought Romeo and Juliet had it rough, being from two different houses and all.  These suspected forebears were from two different species! Now, you may be having difficulty imagining the interspecies booty call that resulted in the creation of this hybrid, but Dr. McCarthy has an answer for that as well.

Dr. McCarthy says that the original pig-chimp hook up was probably followed by several generations of ‘backcrossing’, where the offspring of that pairing lived among chimps and mated with them – becoming more like chimps and less like pigs with every new generation.

This also helps to explain the problem of relative infertility in hybrids. Dr. McCarthy points out that the belief that all hybrids are sterile is in fact false, and in many cases hybrid animals are able to breed with mates of the same species of either parent.

After several generations the hybrid strain would have become fertile enough to breed amongst themselves, Dr. McCarthy says. (source)

Dr. McCarthy admits that there is a certain amount of repugnance inherent in his theory.  He concluded his paper with this philosophical gem:

“The image of a pig mating with an ape is not a pretty one, nor is that of a horde of monstrous half-humans breeding in a hybrid swarm. But the way we came to be is not so important as the fact that we now exist. As every Machiavellian knows, good things can emerge from ugly processes, and I think the human race is a very good thing. Moreover, there is something to be said for the idea of having the pig as a relative. My opinion of this animal has much improved during the course of my research. Where once I thought of filth and greed, I now think of intelligence, affection, loyalty, and adaptability, with an added touch of joyous sensuality — qualities without which humans would not be human.” (source)

If you’re still curious, you can read his entire premise HERE.

This disturbing mental image has been brought to you by The Daily Sheeple.