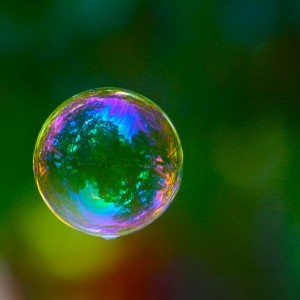 One of the men that won the Nobel Prize for economics this year says that “bubbles look like this” and that he is “most worried about the boom in the U.S. stock market.”  But you don’t have to be a Nobel Prize winner to see what is happening.  It should be glaringly apparent to anyone with half a brain.  The financial markets have been soaring while the overall economy has been stagnating.  Reckless injections of liquidity into the financial system by the Federal Reserve have pumped up stock prices to ridiculous extremes, and people are becoming concerned.  In fact, Google searches for the term “stock bubble” are now at the highest level that we have seen since November 2007.  Despite assurances from the mainstream media and the Federal Reserve that everything is just fine, many Americans are beginning to realize that we have seen this movie before.  We saw it during the dotcom bubble, and we saw it during the lead up to the horrible financial crisis of 2008.  So precisely when will the bubble burst this time?  Nobody knows for sure, but without a doubt this irrational financial bubble will burst at some point.  Remember, a bubble is always the biggest right before it bursts, and the following are 15 signs that we are near the peak of an absolutely massive stock market bubble…

#1 Bob Shiller, one of the winners of this year’s Nobel Prize for economics, says that “bubbles look like this” and that he is “most worried about the boom in the U.S. stock market.”

#2 The total amount of margin debt has risen by 50 percent since January 2012 and it is now at the highest level ever recorded.  The last two times that margin debt skyrocketed like this were just before the bursting of the dotcom bubble in 2000 and just before the financial crisis of 2008.  When this house of cards comes crashing down, things are going to get very messy…

“When the tablecloth gets pulled out from under the place settings, you’re going to have a lot of them crash and smash on the floor,” said Uri Landesman, president of Platinum Partners hedge fund. “That margin’s going to get pulled and everyone’s going to have to cover. That’s when you get really serious corrections.”

#5 Marc Faber recently told CNBC that “we are in a gigantic speculative bubble”.

#6 In the United States, Google searches for the term “stock bubble” are at the highest level that we have seen since November 2007 – just before the last stock market crash.

#8 According to CNBC, Pinterest is currently valued at more than 3 billion dollars even though it has never earned a profit.

#9 Twitter is a seven-year-old company that has never made a profit.  It actually lost 64.6 million dollars last quarter.  But according to the financial markets it is currently worth about 22 billion dollars.

#10 Right now, Facebook is trading at a valuation that is equivalent to approximately 100 years of earnings, and it is currently supposedly worth about 115 billion dollars.

#11 Howard Marks of Oaktree Capital recently stated that he believes that “markets are riskier than at any time since the depths of the 2008/9 crisis”.

#12 As Graham Summers recently noted, retail investors are buying stocks at a level not seen since the peak of the dotcom bubble back in 2000.

#13 David Stockman, a former director of the Office of Management and Budget under President Ronald Reagan, believes that this financial bubble is going to end very badly…

“We have a massive bubble everywhere, from Japan, to China, Europe, to the UK.  As a result of this, I think world financial markets are extremely dangerous, unstable, and subject to serious trouble and dislocation in the future.”

#14 Bob Janjuah of Nomura Securities believes that there “could be a 25% to 50% sell off in global stock markets” over the next couple of years.

#15 According to Tyler Durden of Zero Hedge, the U.S. stock market is repeating a pattern that we have seen many times before.  According to him, we are experiencing “a well-defined syndrome of ‘overvalued, overbought, overbullish, rising-yield’ conditions that has appeared exclusively at speculative market peaks – including (exhaustively) 1929, 1972, 1987, 2000, 2007, 2011 (before a market loss of nearly 20% that was truncated by investor faith in a new round of monetary easing), and at three points in 2013: February, May, and today.”

As I mentioned at the top of this article, this stock market bubble has been fueled by quantitative easing.  Easy money from the Fed has been artificially inflating stock prices, and this has greatly benefited a very small percentage of the U.S. population.  In fact, 82 percent of all individually held stocks are owned by the wealthiest 5 percent of all Americans.

When this stock market bubble does burst, those wealthy Americans are going to be in for a tremendous amount of pain.

But there are some people out there that argue that what we are witnessing is not a stock market bubble at all.  That includes Janet Yellen, the new head of the Federal Reserve.  Recently, she insisted that there is absolutely nothing to be worried about…

“Stock prices have risen pretty robustly,” Yellen said. “But I think that if you look at traditional valuation measures, you would not see stock prices in territory that suggests bubble-like conditions.”

We shall see who was right and who was wrong.  Let’s all file that one away and come back to it in a few years.

So where are stocks going next?

If you had the answer to that question, you could probably make a lot of money.

Yes, the current bubble could burst at any moment, or stocks could continue going up for a little while longer.

After all, the S&P 500 has risen in December about 80 percent of the time over the past thirty years.

Perhaps that will be the case this December as well.

Do you feel lucky?