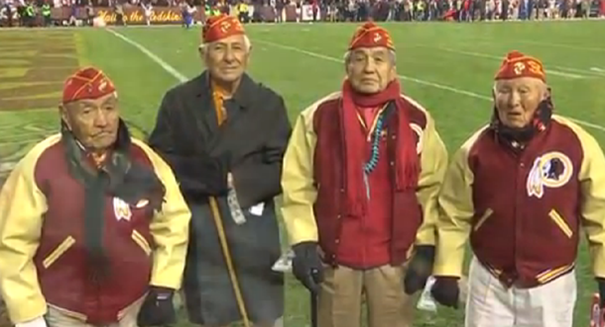 Do these four  American heroes look offended to you?

Oh no, to the contrary they look full of pride. And why wouldn’t they be?

These four men were honored at a recent Monday Night game between the Washington Redskins and the San Francisco 49ers. These four men are some of America’s finest from World War II. They are part of our history and part of the strategy that led us to victory. These men are Navajo Code Talkers.

For those who do not know the story of the “code talkers” you might want to check out a Nicholas Cage movie called Windtalkers from 2002. These men are the same infamous Marine-Navajo Code Talkers that the movie is based on.

Fox News recently featured an AP story about Roy Hawthorne (second from left in above picture):

A leader of the Navajo Code Talkers who appeared at a Washington Redskins home football game said Wednesday the team name is a symbol of loyalty and courage — not a slur as asserted by critics who want it changed.

Roy Hawthorne, 87, of Lupton, Ariz., was one of four Code Talkers honored for their service in World War II during the Monday night game against the San Francisco 49ers.

Hawthorne, vice president of the Navajo Code Talkers Association, said the group’s trip was paid for by the Redskins. The four men met briefly with team owner Dan Snyder but did not discuss the name, Hawthorne said.

Still, he said he would endorse the name if asked, and the televised appearance in which three of the Indians wore Redskins jackets spoke for itself.

“We didn’t have that in mind but that is undoubtedly what we did do,” Hawthorne said when asked if he was intending to send a statement with the appearance. “My opinion is that’s a name that not only the team should keep, but that’s a name that’s American.”

The team should keep the name and it’s “American.”

Take all of the opinion polls you want and they just don’t matter. It would seem to be common sense that the opinion of a man who is a proud Navajo, and served his country, would matter more than any opinion of the bleeding hearts who seek to protect his delicate feelings.

There is nothing delicate about this man’s feelings because he is a real man. He is not the type that would be into political correctness. He has more important things to worry about as most grown men and women do.

Political correctness has a singular goal of division.

Native Americans have a lot more to be offended about than a football team. They were persecuted to criminal levels throughout this nation’s history.

But most people understand that the people of today can not be held accountable for the actions of our ancestors. Some people remain stuck in the past but most of us have to pick up and try to make this world a better place, just like Roy Hawthorne did in World War II.

Without the four men pictured above, and hundreds of others like them, our chances of success against Japan would have been greatly diminished.

How important were they?

I’ll leave you with a quick reference from Wikipedia:

The Navajo code talkers were commended for their skill, speed and accuracy accrued throughout the war. At the Battle of Iwo Jima, Major Howard Connor, 5th Marine Division signal officer, had six Navajo code talkers working around the clock during the first two days of the battle. These six sent and received over 800 messages, all without error. Connor later stated, “Were it not for the Navajos, the Marines would never have taken Iwo Jima.”

800 messages without error? These are human beings. Our government can’t even get its own computer systems and websites to function without error.