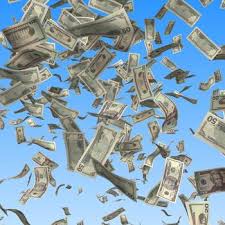 A 29-year-old Minnesota man tossed 1,000 dollar bills into the air at the Mall of America in hopes of spreading holiday cheer.

As he descended on an escalator, Serge Vorobyov threw his “last $1,000″ to a crowd listening to a trio of vocalists sing “Let it Snow”.

Vorobyov had a rough year – he  lost his business and his wife, so he wanted to do something to make the holidays a little brighter for others.

“I thought I’d just spread some holiday cheer, be positive and pay-it-forward type of thing. And make it snow money,” he said in a video he created to explain his motive:

Vorobyov said he knew he’d get in trouble. He was cited by Bloomington police for disorderly conduct and will have a court date and face a fine. Vorobyov was also banned from the mall for a year.

The dollar bills Vorobyov threw into the crowd were stamped with his YouTube address and Facebook page information. He posted a photo of the citation on his Facebook page and referred to the incident as a “publicity stunt,” but argues that no one was hurt.

Mall of America spokeswoman Sarah Schmidt told the Star Tribune that it was the first incident of its kind for the mall and said that Vorobyov disrupted the performance and could’ve caused a serious situation.

Maybe he could have, but he didn’t, according to news reports and videos of the scene. The behavior of the crowd was surprisingly calm – a stark contrast to the mischief and mayhem people caused on Black (& Blue) Friday.

Vorobyov says it was worth it. “Everyone can laugh about it – everyone was having fun. I think that’s what life is about – just following your heart.”