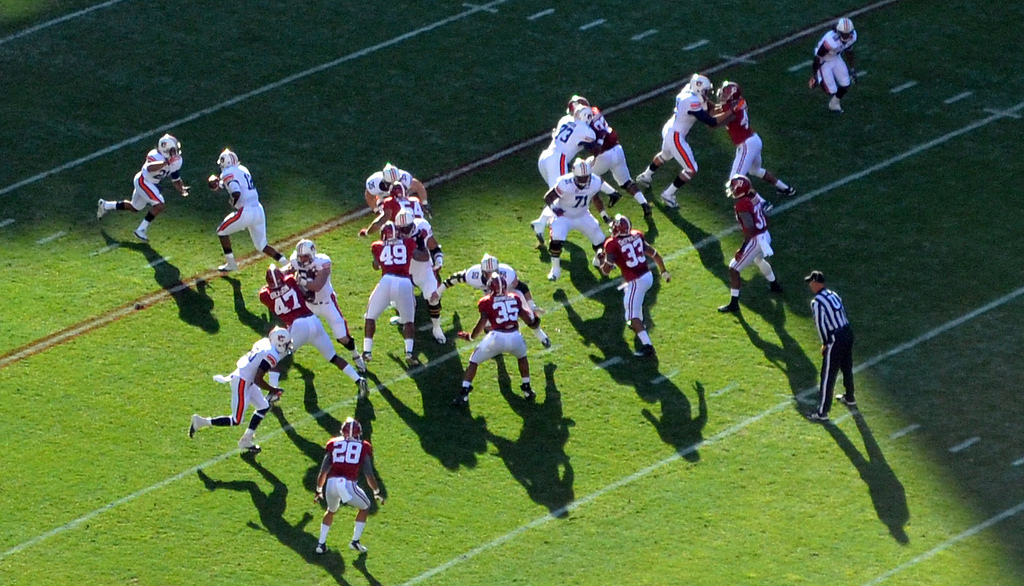 This is football not the battlefield. But for Michelle Shepherd, 36, Alabama’s loss to Auburn was enough to get her killed. Adrian Laroze Briskey, 28, shot and killed Shepherd for not being angry after the loss. To clarify, this was not a robbery gone wrong, a domestic dispute, or a carjacking where someone ended up dead. This was murder in cold-blood over one team’s loss in a football game. Over the reaction of one woman. To try to explain such a happening is impossible. It defies explanation. The only true explanation is society has gone insane. With Americans being victims of the cruel and brutal “knockout” game, this is further proof that society has lost its collective grip. When people are dying over football, what’s next? Anarchy.

The murder of Michelle Shepherd should make every American afraid. It someone can get so upset about a football game, enough to start shooting, everyone should be terrified. A nut-job like Adrian Laroze Briskey could be right around the corner ready to shoot if there isn’t an “appropriate” response to a football game loss. The idea that someone could lose his or her life over a game is outrageous on every level.

But that is exactly what happened to Michelle Shepherd.

A woman charged with killing a fellow Alabama fan after the end of last weekend’s Iron Bowl football game was angry that the victim and others didn’t seem upset over the Crimson Tide’s loss to archrival Auburn, said the sister of the slain woman.

Adrian Laroze Briskey, 28, was charged Monday with murder in the killing of 36-year-old Michelle Shepherd.

How in the world did this happen? It’s nonsensical. The idea that someone would get upset with another person, enough to start shooting, over the loss of a football game is more than disturbing. It’s pathological insanity. But in 2013 America, this kind of senseless violence is epidemic.

Hoover police Capt. Jim Coker said both Birmingham women were Alabama fans and at the same party for the annual game between intrastate rivals. With no time left on the clock, Auburn returned a missed Crimson Tide field goal more than 100 yards for a 34-28 victory, dashing any hopes of Alabama playing for a third straight national championship.

The victim’s sister, Nekesa Shepherd, said she witnessed the killing and had no doubt it was about football, even though it was unclear to investigators whether the violence was motivated by the game.

Briskey flew into a rage when she noticed the sisters joking after Alabama lost the game. She got upset enough to kill.

Nekesa Shepherd said Briskey flew into a rage when she saw the sisters and others joking that Alabama’s loss wasn’t as bad as if the NBA’s Miami Heat had lost a game.

“She said we weren’t real Alabama fans because it didn’t bother us that they lost. And then she started shooting,” Ms Shepherd said.

Why she had a gun with her is the question. There were close to two dozen people gathered to watch the game. But how someone could get this upset over something so inconsequential is the real question. There will likely never be a true answer to this. She might have been drinking, but there is no amount of alcohol that would ever be a reason for such a response.

Shepherd, the mother of three, was shot to death in the parking lot of an apartment complex in the Birmingham suburb of Hoover and the women did not know each other before the party, Capt Coker said.

The two women had no history. They didn’t even know each other. If they had a violent altercation before this, it might make more sense. Even then, it would be an unthinkable act. But these two women were complete strangers. Now Shepherd leaves three children behind because of Briskey’s outrageous actions.

Shepherd said Briskey drank multiple shots of liquor during the game and “went crazy” when she heard people joking after ‘Bama lost.

“It was over a football game,” said Shepherd. “I’m never going to forget it because she died in my arms.”

A woman died because of a football game. That is the final analysis. There is no justification for such atrocity. This is cold-blooded murder. Forget the alcohol. Briskey should be held responsible for her actions. She should pay the ultimate price for taking a woman’s life because she didn’t like her joking after Alabama’s loss. It doesn’t get more tragic than this.