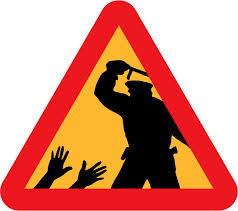 An 85-year-old man who won a $45,000 settlement in an excessive force case against the NYPD is now being sued by the cop who punched him.

George Capsis’ federal lawsuit alleged he was punched in the face and falsely arrested in May 2012 by NYPD Officers Christian Rich and Juan Perez.

Capsis said a police van pulled into a bicycle lane in front of him as he was riding his bike. After saying, “Police shouldn’t break the law”, Capsis says the two cops pinned him to the van and ordered him to dismount his bike.

Capsis said he couldn’t move, and that amid “the political deceptions, the arrogance of monied power, an irresistible rush of hate welled up and I slapped him.” Capsis said one officer punched him and he struggled while another tried to cuff him. More cops came, took Capsis to the precinct and then to Beth Israel’s emergency room.

That suit was settled last month, but the battle between Capsis and Perez continues.

Capsis admits that he slapped Perez in the face during the altercation, and says he regrets doing so. Now Perez is suing Capsis for assault and defamation.

Perez, who is assigned to the NYPD’s 6th Precinct in Greenwich Village, declares in his countersuit that Capsis struck him in the head as he tried to “gently guide” the elderly man to the sidewalk.

Perez suffered lacerations, and also claims that he was defamed by Capsis in his community newspaper, which published the statement, “You don’t smash your fist into an old man with glasses,” according to the suit.

Capsis says Perez’s name was never published and said that the idea that he beat up the cop was laughable. “I’m no Charles Atlas and I don’t work out,” Capsis said.