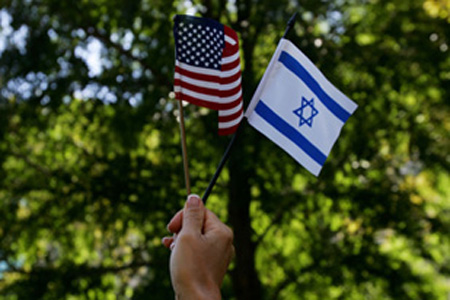 The City of Dearborn, Michigan has been the center of Islamic activity in America. The Islamic population has grown considerably and has taken over in the area, and one wonders just how much of sharia has been advanced in the city. In October, the “satirical” website National Report posted an article about Dearborn entitled “City In Michigan First To Fully Implement Sharia Law.” However, the article doesn’t sound too satirical when looking at the facts. Especially right now, when a couple is being threatened for merely displaying an Israeli flag and a United States flag outside their home. That’s enough for those who say sharia isn’t overtaking Dearborn to think twice. This couple isn’t just receiving idle threats, but having Nazi flags placed in their yard. Sound harmless? No threat from followers of Islam is harmless.

Terresa and Hussein Dakhlallah are terrified. For what reason would they have to be so afraid? For the past two years they have been displaying both an Israeli and American flag outside their home in Dearborn, Michigan. This is America, it is their right to display the flags. More than that, it is a sign of true patriotism. But not in Dearborn. This kind of display will attract unwanted attention from the Islamists that rule the streets.

Their property has been vandalized, and worse, the Nazi flags have been left in their yard. Who would do this to strangers? Sharia law-abiding Muslims.

“That just brought it on enormously,” Terresa Dakhlallah said, her voice shaking. “They left Nazi signs in our front yard … Two people were standing there – one with a lighter and one with a gas can – telling us they were going to burn our home down.”

Terresa said the most recent incident was Friday night when a group of men in an SUV shot their home and vehicle with paintball guns.

She said that when she began putting up Christmas lights around the same time, “they told me if I lit them, it would be the last thing I did.”

Not only did they vandalize their property, but they threatened Terresa’s life. Terresa is an American raised in Canada, and her husband Hussein Dakhlallah is from Lebanon. Wouldn’t a man who has lived in the Middle East feel safer in America? After all, he has probably seen things that most Americans could only imagine having lived in the strife filled region of constant warfare. But his answer is shocking. Worst of all, it is more than telling about the current state of America, and the potential future of this land of the “free.”

Hussein Dakhlallah went so far as to say that he feels safer in his war-torn home country than in Dearborn at this point.

“I feel safe there more than here now,” he said with a shrug. “Because over there you know if they fight you gotta just run. Here you never know what’s going to happen.”

That’s right. He just said what most people would not dare utter out loud. A person might think it, but not say it. You never know what is going to happen, while over there they would fight and run. There is an unpredictability here, a response that cannot be measured. An enemy that has incredible power and a state that has succumbed to it. This is sharia in America.

Metro Detroit is a melting pot of cultures. But Islam does not mesh with other “cultures” or “religions.” Detroit is a disaster, literally and figuratively. So while it might have been a big “joke” to declare that sharia law is now in place in Dearborn, it really isn’t funny. Look at the signs. The city and the state are submitting to sharia. An article written in 2007 entitled “Michigan: The Islamic Capital of the U.S” described Dearborn as the epicenter.

Just outside of Detroit, the city of Dearborn, MI (the tenth most populated in that state) holds the second densest Arab community outside of the Middle East. In a show of force, Dearborn’s largely Shiite Muslim population took to the streets in celebration after the execution of former Iraqi dictator Saddam Hussein.

The Shiite/Sunni dynamic doesn’t change with location. The Dakhlallah’s have every reason to be afraid. Sharia law is in full force in Dearborn, and this isn’t a joke. Though the mainstream media may scream “Islamophobia,” that doesn’t make it any less true.