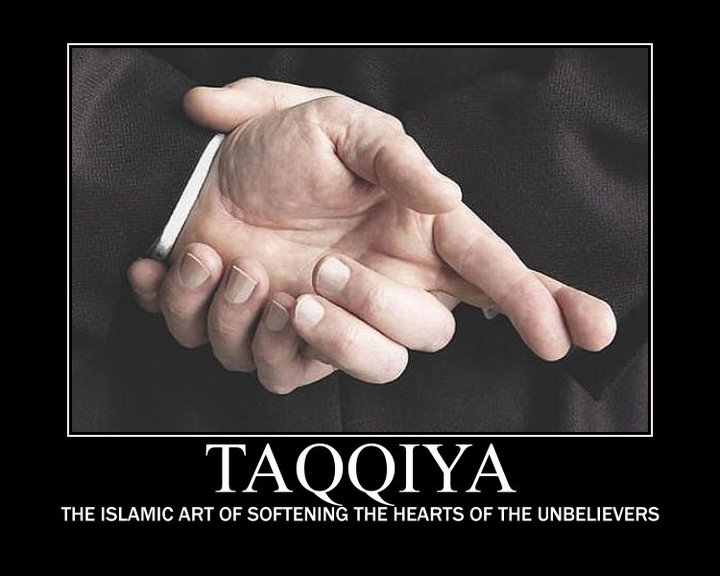 The sharia…soft jihad against the West stealthily creeping its way into the fabric of our American society with its repressive laws and lack of freedoms. The sharia…the antithesis of everything our Constitution and Bill of Rights expounds. The sharia brings to the forefront the question…are there really any moderate muslims?

My answer to that question is a simple NO.

Islam…the supposed ‘religion of peace’ is anything but for if one is a follower of islam one takes the words of the qur’an to heart as the words of god (little ‘g’ for allah is a false god and NOT the one true living God of we Christians and Jews), and lives those words as allah commands. And as allah commands means at least 109 verses that tell the followers of islam…the muslims…in NO uncertain terms to kill the infidels…meaning us…with few words…few verses that tolerate or accept non-believers.

The concepts of humiliation and denigration runs rampant within the qur’an’s verses leaving non-believers to either convert or die…it really does all boil down to that. So if one truly follows islam and the words of the qur’an one simply cannot be a ‘moderate’ muslim for moderate views do NOT call for the death of those who do NOT follow their ways.

The qur’an can be summed up in this one verse, Sura 9.5:“So when the sacred months have passed away, then slay the idolaters wherever you find them, and take them captive and besiege them and lie in wait for them in every ambush, then if they repent and keep up prayer and pay the poor-rate, leave their way free to them.”

In other words, convert or die…NOT moderation by any means.

And while some muslims in this country claim to be ‘secular’ or ‘moderate’ that concept is really non-existent for one cannot be secular and embrace Western culture and be a muslim embracing the qur’an’s words to kill the infidels at the same time. Western culture separates organized religion from matters of state, while islam is all about control over every aspect of one’s life…from how one conducts oneself in terms of one’s religious life to how one is adjudicated punishment if one breaks the law. And here is where the sharia comes in as more and more supposed ‘moderate’ muslim communities across the US are embracing said sharia as their governance of choice.

And how can ‘moderate’ muslims truly exist in any form when on 9/11 so-called ‘moderates’ were celebrating the deaths of 3000 Americans by dancing in the streets all across America. And those who did NOT outwardly celebrate remained silent in their condemnation of those that did. Silence can and does speak louder than words and in the so-called ‘moderate’s’ silence then…and their continuing silence now…that silence speaks of condoning for if one does NOT vocally condemn one does indeed condone. And even today when an act of jihad does occur those supposed ‘moderate’ voices still remain silent. The silence of ‘moderate’ voices over Benghazi and the Boston Marathon Bombing are but two cases in point, as it sadly seems that the only thing keeping those who call themselves ‘moderates’ from outwardly supporting the jihadis is fear, and the fact that they are but a small minority of the American populace.

And that mindset must be changed above all else for silence against the jihadis will forever cast those who call themselves ‘moderates’ as outsiders…and rightly so.

The muslim countries, specifically those in the Middle East, show NO signs of secularism nor any signs of moderation…as islam continues to wrap its tentacles around every miniscule detail of its followers lives until it figuratively and sometimes literally squeezes the very life out of one’s body.

Here in America the outward signs might NOT be so obvious to the casual observer as muslims might work alongside us…send their children to our schools…go shopping in our stores…dress somewhat like us (the hajib ‘head bag’ and burqa ‘garbage bag’ do rear their ugly head on more and more occasions it seems) yet even those who call themselves ‘moderates’ want special allowances made for them just to call attention to themselves. Using attention seeking as a way to promote islam…as in do every and anything including lying and living falsely (taqiyya) to promote and integrate islam into our society…to take over our society…the so-called ‘moderates’ are actually following the commands set down in the qur’an and therefore are NOT ‘moderates’ at all.

In muslim society, even muslim society here in America’s muslim communities, individual freedoms continue to get lost amongst both the arbitrarily adjudicated rules of the sharia and the strict commands of the qur’an, while the traditions and worship practices that define religiousness will continue to keep muslims living here from ever becoming true ‘moderates’ in any sense of the word that we view moderate anything as being.

American society…both culturally, religiously, and politically…must NEVER accept the false concept of a ‘moderate’ muslim let alone a ‘moderate’ muslim society until those who call themselves ‘moderates’ stand up en-masse and shout in loud and clear voices their condemnation of the jihadis…of the extremists…of the mullahs and imams who spread hate and perpetrate violence…and who then must shout in those same loud and clear voices their love for and allegiance to America…to our Constitution…and to America’s rules of law alone.

And so while Barack HUSSEIN Obama (I will NOT call him president) continues to claim that “the United States is a Muslim nation” we know the truth in that lie as well as we know the truth that a ‘moderate’ muslim is a non-existent, politically correct fabrication of the left and probably will always remain so.