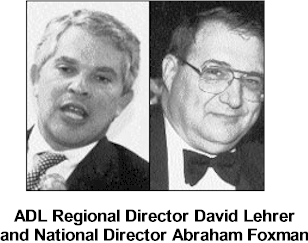 2013 marks the 20th anniversary of the infamous “Anti-Defamation League (ADL) files controversy”  in which the ADL was discovered infiltrating, spying on and otherwise violating the privacy rights of a large number of anti-Apartheid, civil-rights and peace groups through the unlawful acquisition of private data from corrupt local law enforcement officials.  The single best retrospective is from long-time Middle East analyst and broadcaster Jeffrey Blankfort, who was also among those targeted by the ADL (see, “The Strange History of the Anti Defamation League: ADL Spies“).  Many Americans were outraged in 1993 after reading mainstream press accounts of a vast national ADL spy network with organelles passing information not only to Israel’s Mossad but also Apartheid South African intelligence services—possibly resulting in the mysterious death of Chris Hani and the rushed deportation/detention of many Palestinians.  Declassified FBI files newly reveal not only the flood of constituent letters pouring into Congress and the FBI’s unfulfilled assurances that justice would be served, but the ADL’s use of proven tactics that the Israel lobby has deployed since the 1940’s to skirt accountability for major criminalviolations.  The FBI files, originally scheduled for declassification in 2038, were suddenly released to IRmep under the Freedom of Information Act on November 20, 2013 and may now be browsed and downloaded from the Israel Lobby Archive.  It is a timely release since one of Israel’s most harmful spies, Arnon Milchan, is openly boasting about his criminal exploits and Americans may soon demand not only that unsuccessful old law enforcement tactics be retired but new strategies be fielded to punish Israel lobby wrongdoers and end their long stint of immunity. 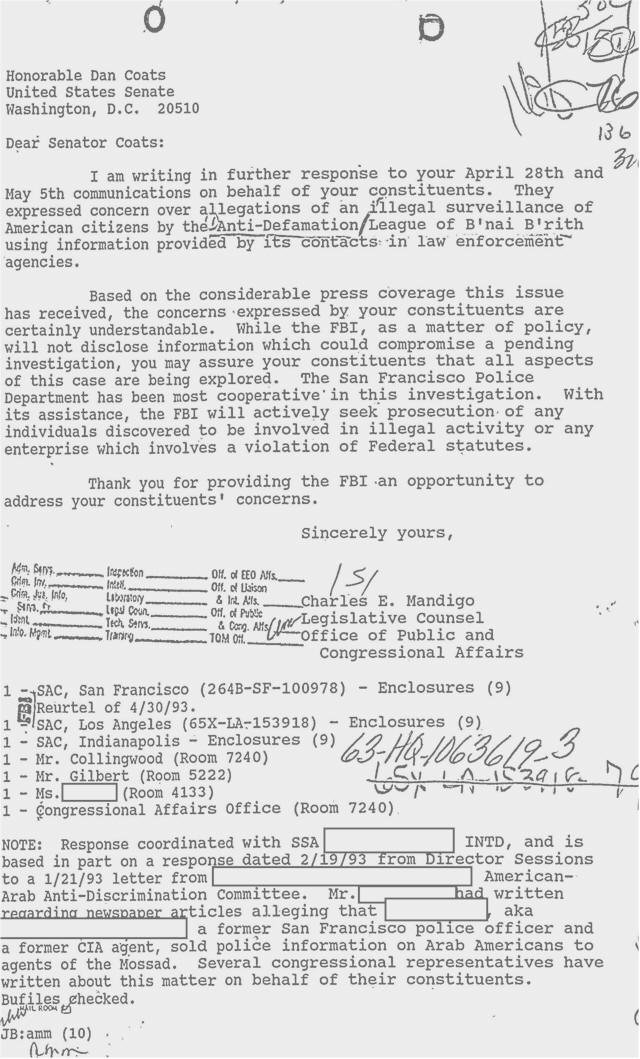 A March 16, 1993 memo launched the ADL espionage investigation from the FBI’s Los Angeles office.  The FBI discovered “unidentified individuals at the Anti-Defamation League (ADL) in possession of [Federal] Bureau [of Investigation] classified information” along with “confidential police reports and files belonging to the San Francisco Police Department” after the ADL’s Los Angeles and San Francisco offices were raided and searched under warrant.  Until that time, Israel was interested in preserving close economic and military ties (including nuclear weapons sales pitches) to Apartheid South Africa. The ADL, in constant contact with the Israeli consulate which frequently tasked it for help, was eager to pitch in.  The FBI discovered one of its own files possessed by ADL’s Los Angeles division was “a summary of activities relating to the African National Congress (ANC).” The FBI immediately noticed the ADL—which had invested decades securing a forced relationship with the FBI by lobbying top elected officials—was suddenly “uncooperative” and stalling for time. By month’s end, Israel’s “heavy guns” had been drawn to snuff out the fledgling investigation.

The FBI already had a long, unhappy history of outside interference in its Israel espionage and smuggling investigations, and the ADL files affair was no exception.  In the 1940s, the FBI had seen the sudden collapse of a pipeline of indictments against hundreds of Americans illegally smuggling conventional weapons to Jewish fighters in Palestine funded by Jewish Agency paymasters operating out of New York.  The intervention of Abraham Feinberg, a major campaign contribution bundler and Israeli government officials proved too much for the Justice Department, which even as evidence continued to pile up, failed to prosecute and dodged civic demands for justice.

A March 31, 1993 FBI memo reveals “two persons, described as ‘Israeli Generals’ are in or are about to travel to Washington, D.C…the purpose of their travel is to try to visit the Attorney General to press for an end to the FBI’s investigations…The FBI’s investigations of these matters are causing a great deal of interference in the U.S. activities of the Anti-Defamation League…and so Israel is seeking to intercede on the ADL’s behalf.”

Mailbags of letters to Congress were forwarded to the FBI and attorney general urging the swift criminal prosecution of the ADL.  Robert Kerrey, John McCain, Richard Lugar, Hank Brown, Jill Long, Dennis DeConcini, and Ernest Hollings, while often distancing themselves from the substance of the complaints, dutifully forwarded the outraged letters.  The FBI’s Legislative Counsel Charles E. Mandigo reviewed demands to prosecute both the ADL and “a former San Francisco police officer and former CIA agent [Thomas Gerard]” who “sold police information on Arab Americans to agents of the Mossad.”  Mandigo assured them “the FBI will actively seek prosecution of any individuals or any enterprise discovered to be involved in illegal activity in violation of federal statutes….”  However, like earlier constituents that in the 1960’s demanded another Israel lobbying organization, the American Zionist Council, be registered as an Israeli foreign agent, they were all in for a huge disappointment. 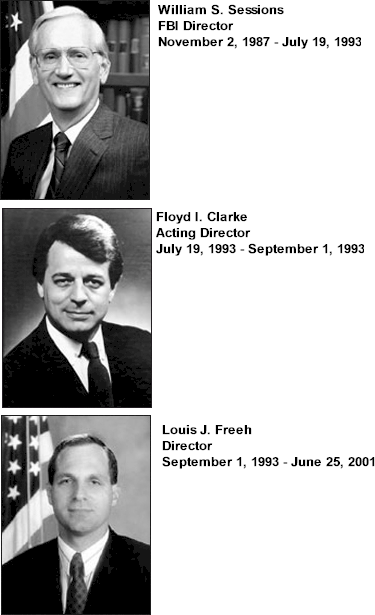 After interviewing a disgruntled former ADL “fact finder” librarian who had curated information and worked with long-time ADL undercover contractor Roy Bullock, the FBI quickly focused in on ADL Regional Director David Lehrer as the prime suspect for acquiring and passing classified FBI files throughout the ADL.  The FBI LA office requested several times that the FBI director authorize a formal interview with Lehrer.  But FBI Director William Sessions, a holdover from the Reagan administration, left in July of 1993.  Acting director Floyd Clarke took no action before leaving on September 1.  Not until September 23, 1993 did the Clinton administration’s new FBI Director Louis Freeh authorize special agent in command Edward J. Curran the only interview that could possibly lead to a prosecution:  “personally interview David Lehrer, Regional Director – ADL – Los Angeles….The interview is to be conducted according to FCIM 65-5.1 guidelines, and recorded on an FD-302 in the event this matter warrants possible prosecution.”

But it was much too late. Israel already had half a year to lobby for closure. On December 1, 1993, Israeli Justice Minister David Libai met for an hour with Attorney General Janet Reno. Libai spent thirty minutes on a futile attempt to secure Reno’s recommendation to President Clinton that Israeli spy Jonathan Pollard’s sentence be commuted.  What Libai did for the remaining thirty minutes of the “private” meeting was not disclosed, but on March 22, 1994 the FBI’s Los Angeles office indicated it was closing the ADL espionage investigation—apparently without ever having interviewed Lehrer.  By April, Janet Reno was gushing over the ADL’s latest report on militias and the FBI-ADL uncomfortable “special relationship”—first ordered by J. Edgar Hoover and later renewed by FBI director William Webster—was seemingly back on track. 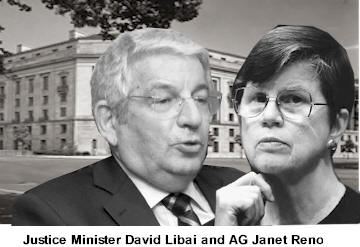 Until this file declassification and release, it was never clear to outsiders whether the FBI had properly investigated ADL’s illegal circulation of its classified files.  Only now can the ADL “files controversy” formally enter the pantheon of “Israel lobby criminal investigations that were improperly closed.”  The 1993 incident bears uncanny similarities to the 2005 AIPAC espionage affair, in which a Defense Department official and two AIPAC employees where indicted under the Espionage Act for circulating classified national defense information in an unsuccessful attempt to foment a U.S. attack on Iran.  AIPAC jettisoned Steven J. Rosen and Keith Weismann for conduct that “did not comport with standards that AIPAC expects of its employees.”—despite the fact that the pair engaged in activities long rewarded by AIPAC.  Its actions suggest AIPAC wanted to prevent a fatal criminal indictment of the entire organization.  Obama administration Justice Department officials quashed the criminal prosecution shortly after taking office in 2009.  Like AIPAC, ADL National Director Abraham Foxman fired a “shocked and dismayed” Lehrer in 2002, but without explanation.  Although at the time many speculated that the termination was the ADL national office’s effort to prevent the increasingly autonomous West Coast offices from splitting off, it also could have been the delayed fulfillment of a non-prosecution agreement in order to finally close the “ADL files controversy.”  Only Abraham Foxman and the Justice Department know for sure. 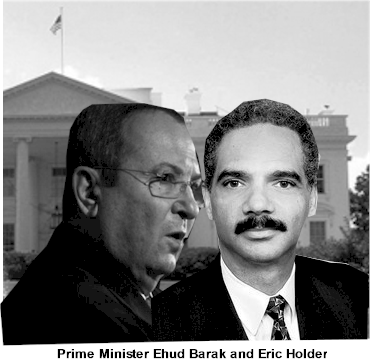 The ADL files controversy is not only similar to the 2005 AIPAC espionage affair but also an earlier 1985 espionage investigation of AIPAC for acquiring classified trade information.  The very solid FBI investigation was suddenly cut short and terminated, presumably after the capitulation of a heavily-lobbied attorney general. In the end, the Reagan Administration did not allow the FBI or public to know who in the International Trade Commission subverted due process by passing a compilation of secret industry data of seventy American groups opposed to unilateral trade concessions to Israeli Minister of Economics Dan Halpern and AIPAC. Yet another 1960’s effort to regulate Israel lobbying by properly registering front groups as Israeli foreign agents similarly collapsed after JFK’s assassination when the Justice Department leadership inevitably underwent rapid turnover.

It is little wonder that Israeli spy Arnon Milchan is now so openly boasting about his years spent pilfering American nuclear weapons technology while working as a successful Hollywood movie producer.  Yet another suspected Israeli spy, fugitive financier Marc Rich, benefitted greatly when Deputy Attorney General Eric Holder (today the attorney general) was successfully lobbied by Israeli Prime Minister Ehud Barak to recommend a 2001 Clinton presidential pardon.  History is unequivocal that all it takes is a few calls to the ever-compliant attorney general for a visiting delegation of Israeli government officials to subvert rule of law in America.

This IRmep report is licensed under a Creative Commons Attribution-NonCommercial-NoDerivs 3.0 Unported License.
Based on a work at http://www.IRmep.org.