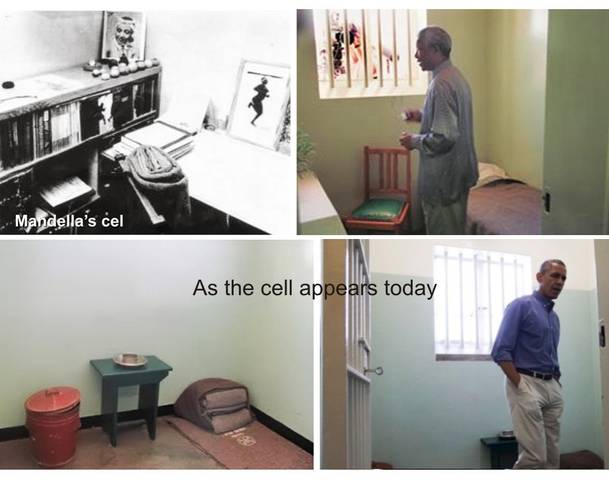 The announcement that Nelson Mandela is dead has been greeted with great sadness by many but in reality many who are aware of the crimes he committed feel differently. He has virtually been elevated to the status of “saint” but in reality he was a self confessed Communist who was responsible for the death and mutilation of hundreds of innocent people.

In his book, ”Long Walk to Freedom”, Peace Laureate, Mandela writes that as a leading member of the ANC’s executive committee, he had “personally signed off” approval of at least sixteen bombings, most of which were aimed at soft civilian targets.

Much is made of his 27 year incarceration but the South African Government did not give him the death sentence for terrorism and murder and he was offered an early release if he would denounce violence. He refused. In fact Nelson Mandela was not incarcerated on Robben Island for 27 years as is often reported. He was there for his part in the bombing of innocent people for 18 years and in March 1982 he was moved to Pollsmoor Prison in Cape Town (along with other ANC leaders Walter Sisulu, Andrew Mlangeni, Ahmed Kathrada and Raymond Mhlaba) where he was taken on frequent trips to see his attorneys and members of parliament. From there in the 1980’s he was moved to Victor Verster prison in Paarl where he lived in a house built for prison staff. There he had a white assistant who cooked his meals, cleaned house and acted as his secretary.

94 year old Mandela fell ill earlier in the year and still in critical condition, was sent home in an ambulance in September. There was ongoing speculation that he was being kept alive on life support. A variety of reasons for the postponing of the announcement were being bandied about but recent reports show that roads around his traditional home which is in a remote rural area have been dramatically upgraded. Even some of the gravel roads have been extensively repaired and re-topped. Together with the new roads, bridges and electricity, there are also new petrol stations and hotels.

Clearly the funeral of this very popular statesman will attract dignitaries from each and every country in the world. Up to now, the home town of Nelson Mandela could not have handled a state funeral of this magnitude. On Thursday 28 November the head of the SANDF cancelled all leave of all military personnel for the December period. No reason has been given.

Many whites in South Africa have greeted the news of his death with apprehension because for years there have been rumblings about the rise in the level of violence towards whites that will mark the death of Mandela. As it stands, whites are being murdered at an alarming rate and most murders are accompanied by prolonged, brutal torture including the use of clothes irons and boiling water. In October this year there were 30 brutal hate murders egged on by the ANC President Jacob Zuma who continues to sing publically about murdering whites.

Whites also suffer under stringent ANC Black Empowerment laws that make it difficult for them to find work and this has given rise to well over 700,000 impoverished whites now living in squatters camps. The laws even prevent private companies from giving aid to white squatters and orphanages that take white children have subsidies cut.

The huge publicity that the announcement of his death and the funeral will bring may help to draw attention away from the current President’s present woes. Zuma is under investigation for spending billions of Rands of taxpayer funds on his personal home. To try and contain some of the bad publicity the ANC recently outlawed the publication of pictures of Zuma’s home. No doubt he will be relieved that the world will be gushing over Mandela and he can safely play host to dignitaries who will not be asking embarrassing questions.

tyrtruth is based in Auckland, Auckland, New Zealand, and writes for All Voices. She is a former resident of South Africa who was forced to flee.

You can read some of her other articles of interest by following the links below: