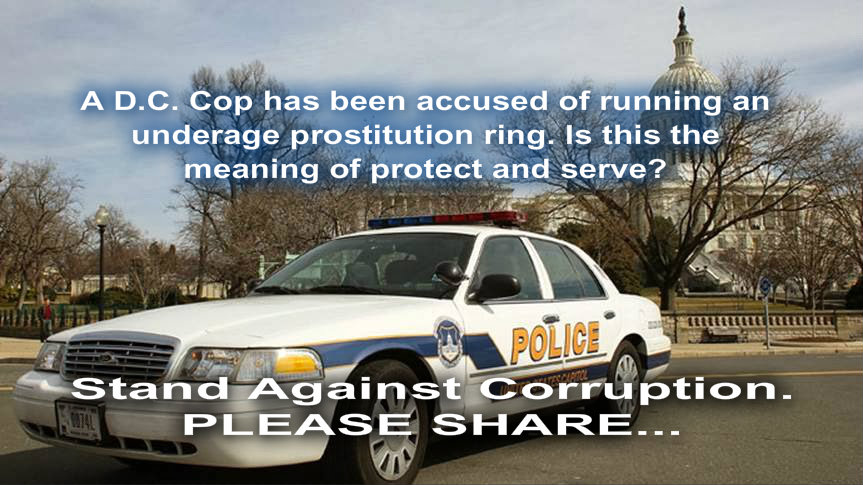 It’s the holiday season and everyone is looking for a little extra money this time of year. While many cops work as security guards, an unnamed officer in Washington DC decided to start his own business.

Appallingly, this man who swore to serve and protect, after reviewing the options, decided that running a prostitution ring specializing in underage girls was the way to make his fortune. It all came to light when the officer’s southeast DC apartment was searched in an effort to locate a missing 16 year old girl.

A search warrant filed at U.S. District Court in the District indicates that the 16-year-old girl, who was found Wednesday inside the Stanton Road Southeast apartment, was one of a number of girls the officer was allegedly prostituting.

During the early morning search of the officer’s home, MPD officers discovered the girl in a back bedroom. She told officers that she had met the suspect about two weeks ago, and after several meetings, the suspect told her that he had made a “date” for her with an older man. That “date” was of to be a sexual nature, documents say.

The teenage girl, whom the suspect told the victim that her prostitution name was to be “Juicy” – was told she’d be paid $80 for performing sexual acts on the man and that she was supposed to give $20 of that to the suspect.

She also told officers that she had met six other girls inside the Southeast D.C. apartment who told her that they were also being prostituted, including with ads posted on backpage.com. The suspect also allegedly took naked photos of the girls, purportedly for use in advertisements for sex.

Marijuana, condoms and a large mirror were also seized from the apartment; law enforcement officials say that the seized mirror had the names of other females who were being prostituted written on it. (source)

This is the second Washington DC officer to be charged with sex crimes against young girls this week. The first, Officer Mark Washington, victimized another missing teenager when he took nude pictures of the 15 year old girl while he was on duty. He has been charged with producing child pornography.

It seems that when the cops aren’t brutally beating handcuffed victims for “resisting”, shooting family pets, or being hired despite troubling work histories filled with corruption, they’re running the very type of criminal enterprises that they are supposed to be policing.

And even worse, the most defenseless members of society, children, are their sexual victims.