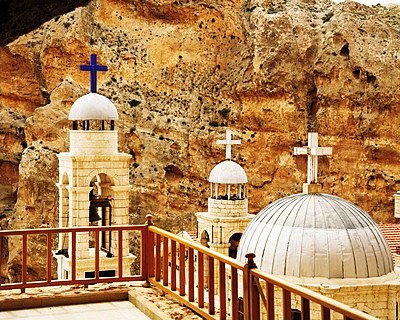 Yet another phenomenon with a long paper trail in Islamic history has just taken place, even as the Western “mainstream”—little acquainted with true history or reality—dismisses it as an aberration. Asia News has the details:

Islamist rebels have kidnapped a group of nuns from the Greek Orthodox monastery of St Thecla (Mar Taqla) in Maaloula [an ancient Christian community where Christians were earlier forced to convert to Islam or die]… “Armed men burst in the monastery of St Thecla in Maaloula this afternoon [Dec. 2]. From there, they forcibly took 12 women religious,” Mgr Zenari said …. Neither the nuncio nor the Greek Orthodox Church know [the] reason behind the kidnapping.

Maaloula: ancient Christian site where inhabitants still spoke Aramaic, language of Jesus, before being devastated by the jihad, its nuns abducted, its ancient churches desecrated.

The “reason behind the kidnapping”? Sexual abuse and rape certainly should not be discounted, as these have been the lot of thousands of women abducted by U.S.-sponsored “freedom fighters” in Syria. Indeed, a new report issued by the National Reconciliation Commission in Syria states that some 37,000 women have been raped since the war started.

To keep the jihad in Syria alive, pro-war Islamic clerics have issued any number of fatwas, or Islamic rulings, permitting sexually-frustrated, female-deprived rebels to rape women. Most of these are based on the simple fact that Islam permits jihadis, based on the example of their prophet, to copulate with any captured woman—or, in the words of the Koran, “what your right hands possess” (see “The Jihad on Christian Women: Abduction, Rape, and Forced Conversion,” pgs. 186-199 in Crucified Again for detailed information).

One cleric permitted the abduction and rape of any Syrian woman, provided she is not Sunni. Yet apparently because there are still not enough women for the jihadi hordes, many of whom are foreigners—one Christian child was recently raped by 15 men before being killed—Sunni Muslim women are also being targeted through sex jihad fatwas.

So would such jihadis and their clerics have any special respect for Christian nuns?

The fact is, raped nuns is a phenomenon that goes back centuries. According to Muslim historian Taqi al-Din al-Maqrizi (1364-1442) during his raids on Egypt, Caliph Marwan II (r.744–50) “made captive a number of women from among the nuns of several convents. And he tried to seduce one of them.” The account describes how the enslaved nun tricked him into killing her, by claiming she had a magic oil that make skin impenetrable: “She then took some oil and anointed herself with it; then stretched out her neck, which he smote with the sword, and made her head fly. He then understood that she preferred death to defilement.”

Writing in the 10th century, the Coptic chronicler Severus ibn Muqaffa records that “the Arabs in the land of Egypt had ruined the country…. They burnt the fortresses and pillaged the provinces, and killed a multitude of the saintly monks who were in them [monasteries] and they violated a multitude of the virgin nuns and killed some of them with the sword.”

After the Islamic conquest of Constantinople in 1453, according to eyewitness accounts, “Monasteries and Convents were broken in. Their tenants were killed, nuns were raped, many, to avoid dishonor, killed themselves. Killing, raping, looting, burning, enslaving, went on and on according to tradition.”

Such is history—expunged as it is in the modern West, even as it repeats itself today. Thus, in August 2013, after torching a Franciscan school in Egypt, “Islamists,” in the words of the AP, “paraded three nuns on the streets like ‘prisoners of war’” and “Two other women working at the school were sexually harassed and abused as they fought their way through a mob.”

Indeed, the rise in attacks on Christian nuns throughout the Islamic world further demonstrates that they are no more inviolable than other “infidel” women:

The above examples come from five countries that have little in common with one another—neither race, language, culture, nor economics—only Islam.

That alone should say something.

But no matter. Far from discussing Islamic history and doctrine, and how they tie to current events, the predominant Western mentality simply dismisses Muslim violence as the West’s fault, or, in the recent words of ex-nun Karen Armstrong, “We did this.” Armstrong—who quit the nunnery only to engage in pro-Islamic mummery—insists that what’s needed is for us to focus more on “Muslim pain, Muslim suffering.”

Such, according to the leftist mentality, are the “real” reasons why, wherever Muslim-majorities live near non-Muslim minorities, from the dawn of Islam till today, the latter are under attack.