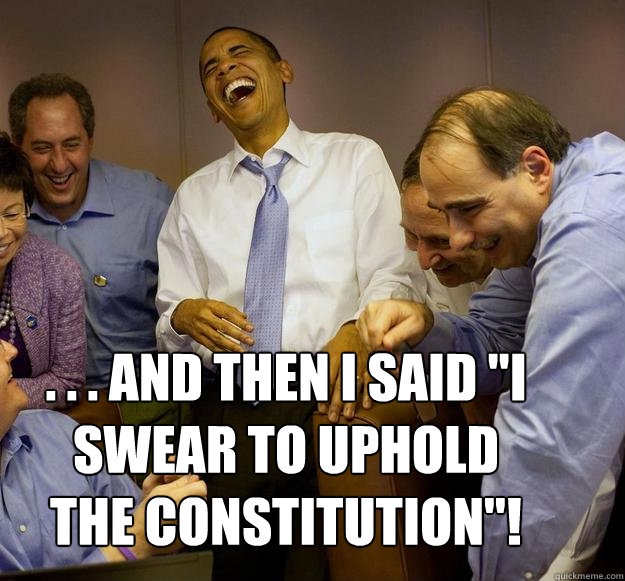 And so those words were (unfortunately) sworn to by Barack HUSSEIN Obama.

We all know the ObamaCare roll out complete with its joke of a website was a nightmare in every way possible…and continues to be so as band-aide fixes NEVER work…for in this case it still leaves millions without health insurance due to cancellation, which in turn then forces them to buy much more expensive insurance…sometimes double or even triple what the policy holder was paying before being cancelled. And we all know that Obama has made unilateral changes to ObamaCare (the anything but Affordable Care Act) after it was voted on, adopted, and put into law. And that is a major no-no as according to the Constitution changes made to a law…any law…must go through Congress meaning NO president has the power to unilaterally change a law by their own volition.

In fact during recent hearings about ObamaCare, Representative Bob Goodlatte (R-VA) asked Professor Jonathan Turlet (a professor from the George Washington University Law School) the impacts of those unilateral changes Obama made to ObamaCare.

His reply:”The problem with what the president is doing is that he’s not simply posing a danger to the constitutional system. He’s becoming the very danger the Constitution was designed to avoid.”

And so, Obama’s in-your-face casting aside of our rule of law strikes deep into the very heart of our nation’s life blood…the US Constitution…for the Constitution says in Article II Section 3, the president has a “duty, not a discretionary power” to “take Care that the Laws be faithfully executed,” meaning the main responsibility of the President is to make sure laws passed are rightfully implemented. So when Obama tells all that he will NOT enforce ‘certain’ provisions and ‘certain’ provisions alone…as in the suspension of the employer mandate where ObamaCare is being delayed for one year for certain business entities…he is most assuredly violating the Constitution because he has NO right refusing the enforcement of a democratically voted upon, signed by him, and now enacted law…in this case Congressional Joint Resolution #45 (forever known as ObamaCare) passed in July 2010.

And we all know Obama’s tampering with this law is for political fodder alone…as his fear of having both big and small businesses turning against both him and the party with the mid-terms coming up in 11 months is all apparent…and as employers start sending out health insurance cancellation notices to employees during this upcoming year believe me they will start turning against him.

Bottom line…with the ObamaCare law as passed mandating that both individuals and businesses… meaning any business with 50 or more full-time employees…be in possession of health insurance for themselves and their dependents or face paying a penalty…Obama is taking unilateral action in the implementation of ObamaCare…as in NOT applying the law equally to both individuals and businesses.  And in doing so Barack HUSSEIN Obama is violating both his constitutional oath of office and his constitutional duty to faithfully execute the law. Remember, the Constitution authorizes the President to propose and veto legislation but does NOT authorize the President to change existing laws…and Obama’s action in ‘selectively enforcing’ this law puts him extremely close to being a dictator…or thinking that he is already one.

And by the way, even if Obama were to change and delay the individual mandate the same way he changed and delayed the employer mandate clause, that also would be a violation of the Constitution for again, that is NOT how the law was written and passed.

With that, Congress must demand in NO uncertain terms that Obama enforce Congressional Joint Resolution #45…his oh-so-wanted signature piece of legislation…as written and passed or use his refusal as grounds for impeachment…and then after he’s impeached repeal the whole damn thing.

The big question is…will they…but being the known gutless wonders that they are I would NOT hold my breath for it especially with Obama claiming the delay is a ‘sensible adjustment to phase-in enforcement, not a refusal to enforce’…a ‘course correction’ if you will.  And we all know Obama will probably talk his way out of this predicament as he’s done with all the others he’s faced, as he has a way of making those who oppose him back down in their opposition or to take the fall or him.

“I have the power and I will use it in defense of the middle class,” Obama has said on numerous occasions. “We’re going to do everything we can, wherever we can, with or without Congress.”

And with those words…fighting words actually…that is exactly what Barack HUSSEIN Obama is doing by changing the ObamaCare law as passed by Congress. Knowingly and with malice this most miserable of presidents…this most Constitution trampling of presidents…is making those in Congress both irrelevant and a laughing stock as he bulldozes over the very ones whose job it is to be the voice of ‘We the People’…a voice that this administration has for all intents and purposes silenced, for sadly we have a president who does NOT believe in our representative form of government…or in the Constitution itself.

And unfortunately, we also have a current Congress that looks away and continues to allow this to happen.