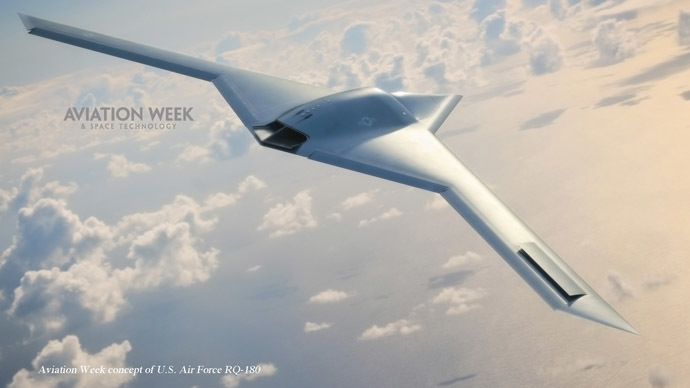 The US Air Force is testing a large, top secret drone at Area 51, which outdoes the currently used unmanned aircrafts in terms of stealth and aerodynamic efficiency, US media report.

The new superior drone is scheduled to enter production and may be operational for the US Air Force as early as 2015, an exclusive report by Aviation Week magazine said.

According to unnamed defense and intelligence officials, the aircraft – called RQ-180 – is designed for intelligence, surveillance and reconnaissance (ISR) tasks.

It’ll conduct the penetrating ISR missions that have been left unaddressed after the retirement of the Lockheed SR-71 “Blackbird” long-range reconnaissance aircraft back in 1998.

The drone, funded from the Air Force’s classified budget, was developed by Northrop Grumman aerospace and defense technology company, which won the competition from Boeing and Lockheed Martin.

The company apparently began working on RQ-180 in 2008 when it revealed a $2 billion increase in its order portfolio, the magazine claimed.

The new unmanned aerial vehicle is currently performing test flights at the Area 51 in Nevada known as most secure known operating base of the US Air Force, Aviation Week said.

Both the Air Force and Northrop Grumman refused to comment on the secret project when they were asked by journalists.

A key feature of the RQ-180’s design is an improvement in its radar cross-section over Lockheed Martin’s F-117, F-22 and F-35. This is optimized to provide protection from low- and high-frequency threat emitters from all directions.

The new drone is similar in size to the Northrop Grumman RQ-4 Global Hawk non-stealthy unmanned aerial vehicle (UAV), which is currently used in Iraq and Afghanistan, but is likely to retire next year.

The RQ-180 weighs nearly 15 tons and can operate for 24 hours, 1,200 nm from its base, exceeding its smaller predecessor RQ-170, which can stay in the air for five to six hours.

The new drone is seen as key for the shift of US Air Force ISR assets away from ‘permissive’ environments such as Iraq and Afghanistan toward operations in ‘contested’ or ‘denied’ airspace.

In September, Air Force deputy chief of staff for ISR, Lt. Gen. Robert Otto, said the “first priority” in intelligence, surveillance and reconnaissance is “to rebalance and optimize our integrated ISR capabilities”.