Way back in 2006, NASA’s David Hathaway said on their website that Solar Cycle 25, which will start around 2022 was going to be a low sunspot cycle. Low sunspot cycles, as is rapidly becoming apparent, is linked to future cold weather. Neither they or the government said anything at the time or during the seven years since it was published.

May 10, 2006: The Sun’s Great Conveyor Belt has slowed to a record-low crawl, according to research by NASA solar physicist David Hathaway. “It’s off the bottom of the charts,” he says. “This has important repercussions for future solar activity.”

The Great Conveyor Belt is a massive circulating current of fire (hot plasma) within the Sun. It has two branches, north and south, each taking about 40 years to perform one complete circuit. Researchers believe the turning of the belt controls the sunspot cycle, and that’s why the slowdown is important.

“Normally, the conveyor belt moves about 1 meter per second—walking pace,” says Hathaway. “That’s how it has been since the late 19th century.” In recent years, however, the belt has decelerated to 0.75 m/s in the north and 0.35 m/s in the south. “We’ve never seen speeds so low.”

According to theory and observation, the speed of the belt foretells the intensity of sunspot activity ~20 years in the future. A slow belt means lower solar activity; a fast belt means stronger activity. The reasons for this are explained in the [email protected] story Solar Storm Warning.

“The slowdown we see now means that Solar Cycle 25, peaking around the year 2022, could be one of the weakest in centuries,” says Hathaway. (source)

Scientists have known for some time that a long, low sunspot cycle tends to make the next solar cycle, in this case Solar cycle 25, weaker than its predecessor.

So, if people, including myself, think that Cyle 24, our current cycle, is likely to lead to global cooling, what is being said about Cycle 25?

NASA themselves have mentioned the sunspot peak for cycle 25 may be seven.

Yes, you read that right 7. One more than six and one less than eight.

Their prediction for the current cycle was 67…give or take a spot they were correct. So if they are right about Cycle 25 what will that mean for us?

‘World temperatures may end up a lot cooler than now for 50 years or more,’ said Henrik Svensmark, director of the Center for Sun-Climate Research at Denmark’s National Space Institute. ‘It will take a long battle to convince some climate scientists that the sun is important. It may well be that the sun is going to demonstrate this on its own, without the need for their help.’ (source) 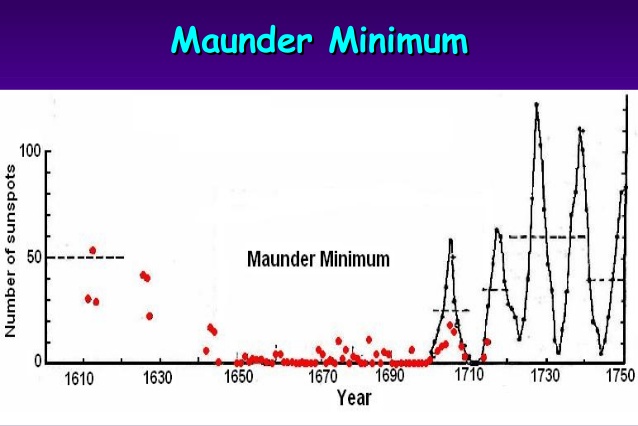 As you can see the NASA figure of a peak of 7 for Solar cycle 25 puts it in Maunder Minimum territory. Not good for us heat loving humans, and our heat loving crops and livestock.

We know that humans can get by in intense cold, but doing so brings with it some very major difficulties, predominantly food.

We see the results of cold weather on both crops and livestock every year. Wheat rotting in the fields due to cold and rain, cattle freezing to death under a thick blanket of snow, but generally, these are isolated incidents.

Imagine if you can the whole of North America, as well as the rest of the Northern Hemisphere, facing the same crisis at the same time.

The problem with the future is that one day it arrives, and it has, it’s here, it’s now. Global warming ceased in 1998, very slowly, almost imperceptibly, cooling has begun. As we move forward in time the pace will quicken, the changes become more noticeable. With Solar Cycle 25 compounding the effects of Cycle 24, we need to think about the next decade or so and we need to do it now.

At this point we live in a country where there is a relative abundance of food. This is going to change and once the weather starts behaving differently it will be to late to set any survival plans you have in motion. Prices will rise fast, and scarcity will become more common. You need to start today.

None of us has lived through a truly cold period that just goes on and on. We have all suffered bad winters, and the massive relief when they are over, and we move on and head towards summer. Picture you and your family trying to survive six months of bitterly cold weather each year and finding the summer waterlogs fields and gardens. Realistically, how long would you last?

Unlike most things we think MAY happen in the future, this catastrophe is actually unfolding before our very eyes. The evidence is there for all to see.

There is no reason to think that the relationship between the Sun and the Earth is going to suddenly change. Our climate moves in cycles, and this is just one cycle of many.

All of these things, and no doubt you can think of countless others, make us ill-equipped to deal with what is coming. Read, research, stock up and generally prepare because if nature decides this is what’s going to happen, it will happen, and that’s the end of it.

Mother Nature does not negotiate and cares nothing for the effects on our lives.