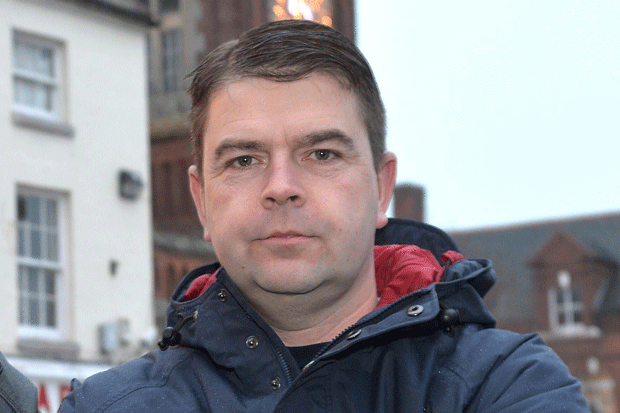 What happened to free speech in the UK? It’s gone along with all semblance of Western civilization.  Neil Phillips, a British sandwich shop owner, was arrested on September 10, 2013 for making harmless jokes about Nelson Mandela online. Not only was he arrested, he was locked up for eight hours, had a DNA sample taken, and his computer seized for three weeks. Why was he arrested for something so ridiculous? He offended Liberal Democrat Councillor Tim Jones, because at the time Phillips made the jokes, Mandela had fallen ill. What happened to free speech in Britain? It went by way of Sharia.

Neil Phillips made some very harmless Nelson Mandela jokes some months ago, that were hardly offensive. They weren’t even his jokes. He copied and pasted them.

In one online post, the 44-year-old wrote: ‘My PC takes so long to shut down I’ve decided to call it Nelson Mandela.’

Another read: “Free Mandela – switch the power off.”

This was enough to have Phillips arrested in the politically correct hell hole that is Britain. Mr. Phillips insisted the Nelson Mandela jokes were not to be taken seriously. But just like in the U.S, the left can’t take jokes. Since when did Nelson Mandela become Allah? That kind of joking could get someone in real trouble. Tacky Christian and Jewish jokes are fine. But the Left has to draw a line.

Mr Phillips was arrested at his home on September 10 and was taken to a police station where he was quizzed about the postings on the Rugeley Soap Box website.

He said: ‘It was an awful experience. I was fingerprinted, they took DNA and my computer.

‘It was a couple of jokes, Bernard Manning type.

‘There was no hatred.

There are no words for how ridiculous this is. To be arrested and interrogated for making jokes is outrageous. One can run into something more offensive on Facebook in less than a minute. The jokes came from a website called the Rugeley Soap Box. Free speech isn’t free if it offends the wrong people. Mr. Phillips wasn’t issuing death threats. Even death threats don’t warrant arrest in all cases. Again, it depends on who is offended.

‘You can question the taste, but they’re not hateful. I told the police they got plenty of “likes.” What happened to freedom of speech?

‘I think they over-reacted massively. Those jokes are “out there,” anyway.

‘When they took my computer, I thought, “what the hell are they looking for?” To be questioned would have been over the top, never mind arrested.’

Mr. Phillips didn’t do anything wrong; he’s just on the wrong side. Mr. Phillips admitted to being a member of the Far Right British National Party some 25 years prior. Interestingly, the party is against the Islamization of Britain and same-sex marriage. Coincidence? There are no coincidences in a Britain ruled by Sharia law.

Liberal Democrat Councillor Tim Jones was so incensed by the one-liners, aired at a time when Mandela was critically ill, that he made an official complaint.

He commented under one tasteless joke: ‘Attacking a 94-year-old man who is probably dying. Does the far right have an ounce of human decency?’

He said: ‘They are vile and deeply offensive, anti-Muslim, anti-disabled.”

Mr. Jones said, “The dispute is about its location. Without the involvement of extremists, people could have sat down talked about their differences and had a good chance of reaching agreement, perhaps on a survey, which most people would have accepted as fair.”

Now it is making sense. Mr. Jones took offense to perceived “anti-Muslim” posts by Mr. Phillips, not to mention laughable Nelson Mandela jokes. Extremism, as in “far right” extremism, is the only thing threatening to a Leftist. Neil Phillips had to wait until September 30th to find out that no further action would be taken against him. This is the height of absurdity in a world gone mad for political correctness. Nelson Mandela was a communist, terrorist supporter that has been made into a deity. All of this happened before Saint Mandela died too. Imagine what would have happened to Neil Phillips if he had made Nelson Mandela jokes after his death? He would be imprisoned for sure.

When Margaret Thatcher died, people organized parties to celebrate her death. Naturally, many recalled her reaction to Mandela.

“Thatcher described Nelson Mandela as a ‘terrorist.’ I was there. I saw her lips move. May she burn in the hellfires,” tweeted British MP George Galloway. Two hours earlier, he sent out the controversial tweet apparently referring to an Elvis Costello song, Tramp the dirt down.

Mr. Galloway didn’t get arrested for this. Margaret Thatcher was a Conservative, and firmly against communism. So it was fine for people to throw death parties for her, a former British Prime Minister. Britain is going the way of Sharia, down the spiraling hell-hole where liberty and free speech do not co-exist.